This will be the second residential tower for the developers on Cannes Avenue after winning approval for an application two doors down earlier this year.

Ridong Group Limited founder Riyu Li and Fengliu Wu sold the property for $7.5 million to Bill Linn in August with Marquee jumping on the opportunity to develop the site.

Plans lodged with the Gold Coast City Council show a 59 metre tower to be built along the Nerang River. 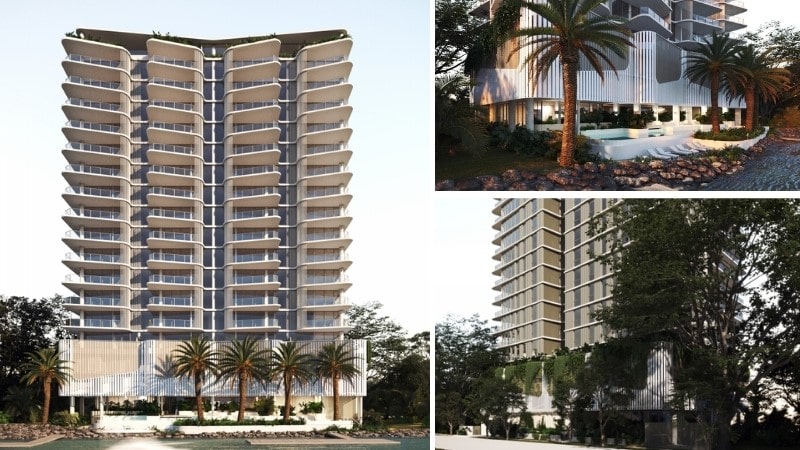 ▲ The apartment tower proposed for 1-7 Cannes Avenue, Surfers Paradise which will replace the 1990s mansion.

If successful, there will be two basement parking levels, ground floor recreation, two elevated carpark levels, 14 levels of apartments and a common rooftop area designed by Plus Architecture.

According to the development application an expansive pool will border the river and be connected to a gym and yoga studio overlooking the neighbouring Neddy Harper Park.

The unit configuration will be split equally between two and three bedroom apartments.

“Reflective of the modern times, recreational facilities on the roof top provide a variety of work from home facilities with a thoughtfully planned business lounge and adjacent working offices for both collaboration and solo use,” the application said.

This development will join with Marquee Development Partners other application which was approved in January this year.

This development at 15-17 Cannes Avenue, Surfers Paradise is a 15-storey residential building on a 2,339sq m site. 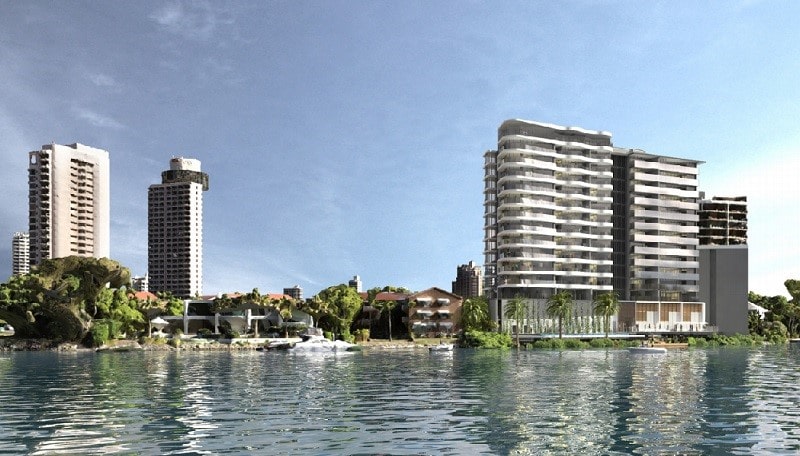 It has 96 units and communal open space on the ground floor and rooftop designed by DBI architects.

These two properties are split by an older, brick, three-storey residential building which was on the market in October. 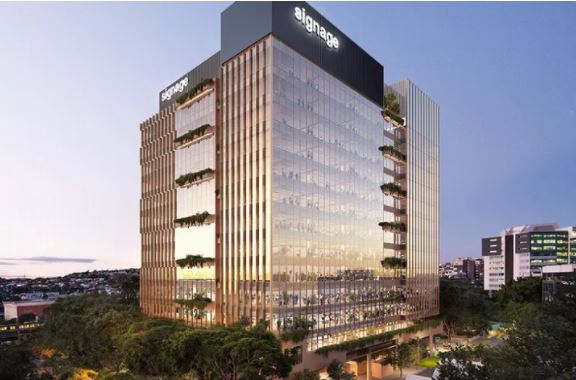 AMP Capital plans to build a 14-storey commercial tower near the Brisbane River as part of the Milton Green precinct on Coronation Drive.

The recently-approved plans for Milton Green Building 7 add a new office tower to the 1.3ha inner-city site at 6, 12 and 18 Little Cribb Street, Milton.

The design by Hassell and Richards & Spence adds a “more contemporary and subtropical” design to the previously approved 2012 plans.

Two extra storeys were added to the design to accommodate a pre-committed tenant’s requirements for “campus style facilities”.

Despite added levels, the commercial space will be slightly reduced to 29,530sq m and retail to 320sq m with large end of trip facilities to be built on the ground floor taking advantage of employees using the Bicentennial Bikeway.

The multi-level carpark and child care centre on the site will be retained while a tennis court will be transformed into an urban common area.

“AMP Capital’s continued engagement and commitment to transform a commercial office park that once reflected values of an era past into an active and vibrant and green village neighbourhood,” the application said.

“Establishing four new activated and covered pedestrian axis that is alive with multiple offerings, this project will be a catalyst for future development of adjacent sites and establish a new streetscape identity for the precinct.”

The Milton plans are are the latest in a wave of development approvals by Brisbane City Council along the river. 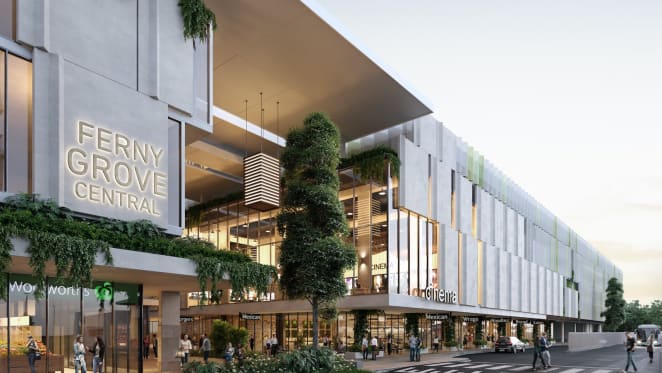 Construction of the development which adjoins Ferny Grove Central Station is expected to commence in the first quarter of 2021.

Queensland developer Honeycombes Property Group has unveiled plans to deliver a $140 mixed use development at Ferny Grove in Brisbane’s north-west.

Part of the project, which will include a new shopping centre called Ferny Grove Central, will be an apartment complex called The Fernery, which will have 82 apartments and a recreational deck.

Construction of the development which adjoins Ferny Grove Station is expected to commence in the first quarter of 2021.

The Townsville-based Honeycombes won the contract in 2017. The property financier MaxCap is its joint venture capital partner.

The project will transform the area into a vibrant suburban Transit Oriented Development (TOD). /in urban planning, a transit-oriented development (TOD) is a type of Urban Development that maximizes the amount of residential, business and leisure space within walking distance of public transport. 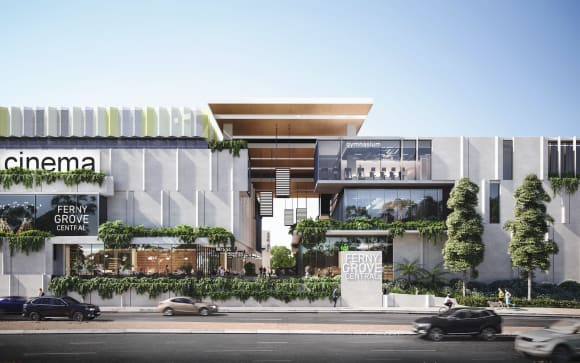 Honeycombes have previously success in a TOD. In 2015 they completed their award-winning $252 million redevelopment of Coorparoo Square, along Brisbane’s CBD eastern fringe, which featured 366 residential apartments and retail space delivered over three stages in a partnership with Frasers Property Australia. The redevelopment of Queensland’s first Myer building awarded with the prestigious Best Mixed-Use Development by the Property Council of Australia.

Peter Honeycombe, managing director of Honeycombes Property Group, says the Ferny Grove development will breathe new life in to the suburb and will create a neighbourhood village atmosphere.

“We have already received a high amount of unprecedented interest from the local market, highlighting the level of demand for both residential apartments and retail opportunities,” Mr Honeycombe said.

Honeycombe says the community feedback received has been an important part of their ongoing refinement of the approved development form.

“We have held more than a dozen different public forums, door knocked hundreds of residences neighbouring the project, and letter box dropped thousands of information fliers to keep the local community in the loop.

“This level of communication will continue during construction to ensure that the community remains aware of the progress on site.”

Honeycombes and MaxCap are expecting to announce a number of major tenants in coming months to the 12,000 sqm shopping precinct, with a mix of high-profile national retailers including supermarkets, fitness centres, child-care and cinema providers expected to be secured on long-term leases.

Ferny Grove is considered an ‘end of line’ rail station catering for more than 5,000 passengers per day transiting through the transport hub. 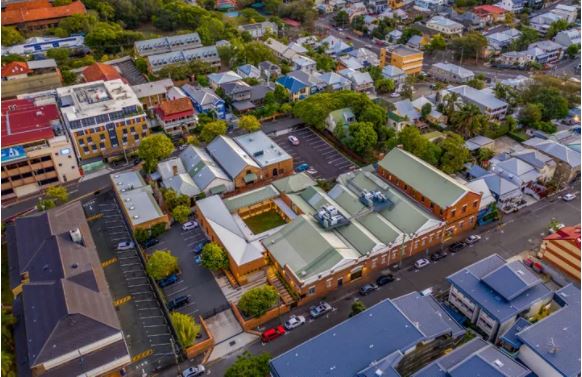 A former bread factory built during World War I in Brisbane’s Fortitude Valley has changed hands for $15.8 million.

The purchase gives the group an award-winning complex of three character buildings with “adaptive redevelopment and repositioning potential” according to CBRE.

It sits on an 5094sq m inner-city land holding with dual street frontages.

“We’re excited by the medium and long-term potential of this asset as the Fortitude Valley region continues to go from strength to strength,” RG Property chief executive Rhett Williams said.

“Securing this large landholding puts us and our investors in a strong position to capitalise on the continued growth in the Fortitude Valley market, which is emerging as a natural extension of the Brisbane CBD.”

The complex, which was built in 1916 and began life as Keating’s Bread Factory, is partially heritage listed and was redeveloped and refurbished in 2008, 2017 and again last year.

The property’s major tenant is Hassell Architects along with a number of smaller occupiers, including software companies, marketing firms and financial services companies, with a staggered lease expiry profile during the next three years.

CBRE’s Morrison said assets such as 37 Kennigo Street were in “high demand as buyers seek to add a mix of asset types to their portfolios”.

“This underpinned interest in the sale campaign, given the current tenant and buyer interest in well-appointed heritage assets,” Morrison said.

Cushman & Wakefield’s Peter Court said the sale came after a rise in buyer enquiry from a range of syndicates and investment clubs.

“We saw an increase in demand towards the end of 2020, a theme that has increased in early 2021 and looks set to continue as buyers view the current market conditions with more certainty,” Court said.