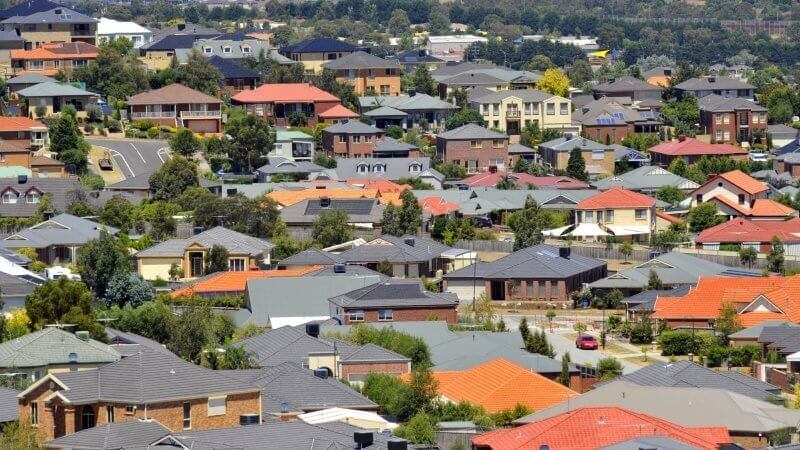 Our property markets have been surging this year with double-digit growth in sight for all our capital cities.

And now that more Australians feel secure about our economy in general, and their jobs in particular, this will only place more impetus under our markets.

I recently heard someone suggest our housing markets are on a Mexican wave.

You know, like what happens at the cricket or football when they used to allow people to go to the MCG.

One person starts and another joins until the whole crowd has their hands in the air and the circular intensity builds and builds.

And this is showing itself as FOMO (fear of missing out) – when homebuyers and investors are scared the market is running away from them.

They feel they must get into the market and this is showing with even secondary properties selling well above their vendor’s expectations.

Normally at the beginning of the property cycle, there is a flight to quality – people remember the type of properties that held their values well during the downturn and avoid secondary properties.

But currently, I’m seeing some home buyers so worried the market is going to pass them by that they are compromising their selection criteria just to get into this market.

Unfortunately, we’ve seen how do you send up when the market eventually slows down, and it’s not always a pretty sight. 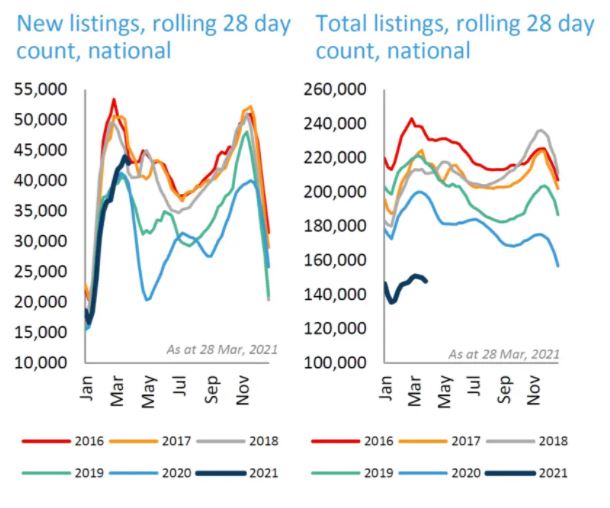 The strength in our housing markets is underpinned by a disconnect between supply and demand. Just look at the charts above.

Corelogic reports national total listings – the stock of properties for sale on the market – over the four weeks to the end of March was 25.5 per cent below the five-year average.

This is because buyer demand is so intense that it is outstripping the ability of sellers to put their properties on the market.

The ratio of sales to new listings is tracking at around 1.1, implying for every new listing added to the market, 1.1 homes are sold.

This in turn keeps the overall inventory levels low, fuelling a sense of FOMO amongst buyers.

Don’t get caught out

I can understand why buyers are concerned with the markets running away so quickly.

Especially first home buyers who are not bringing a “trade-in” to the market.
However, established homebuyers are also usually sellers and will benefit as the value of their existing home increases.
So don’t get caught out and make some of these mistakes I’m seeing buyers make because of FOMO 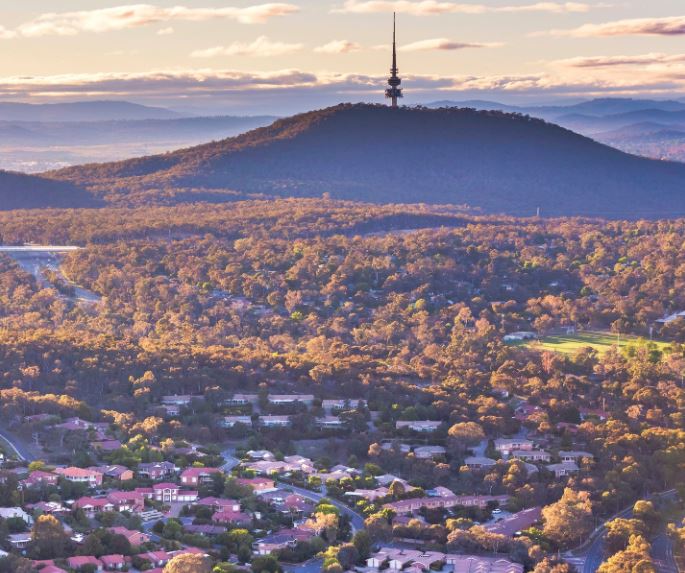 Herron Todd White have released their April property clock, and there has been little movement in the residential sector.

Broome and Canberra were the only locations to change their position on the clock in terms of residential housing values, with both regions moving to ‘rising market’.

There were also few changes to the property clock for the residential unit market last month, with the biggest shift being Canberra moving to a declining market.

oowoomba units shifted to ‘start of recovery’ and Emerald is now classified as a ‘rising market’.

Top of the clock:

Houses – Albury, Bathurst, Burnie/Devonport, Dubbo, Launceston, and Tamworth’s housing values all remain at the peak of the market.

Units – The best-performing unit markets include five of the same locations that featured at the top for houses: Albury, Bathurst, Burnie/Devonport, Launceston, and Tamworth.

Canberra’s unit market was the only area classified as in decline.

Approaching bottom of the market

Bottom of the market

Houses – Albany, Geraldton, and Kalgoorlie remain at the bottom of the market.

Units – Albany, Geraldton, and Kalgoorlie all make another appearance for units, along with Sydney and the Whitsunday region.

Houses – Alice Springs, Bundaberg, and Darwin’s housing markets were all classified as being at the start of their recovery.

Approaching peak of the market

Geelong was the only location classed as approaching the peak of the market for both houses and units.

Is now a good time to buy property? Nearly 40 per cent of people think so, despite record house prices 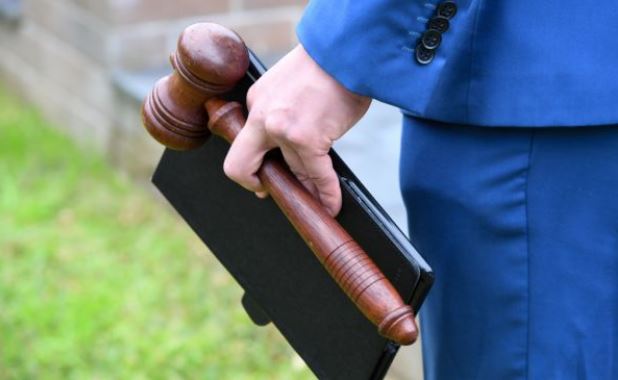 House prices are at historical highs, records tumble every weekend at real estates auctions around the country and price growth rates continue to rise.

Despite those facts, nearly 40 per cent of Australians believe that now is a good time to buy.

According to new research from the financial comparison website Canstar, 38 per cent of those surveyed believed that it was a good idea to buy property now.

Canstar group executive financial services Steve Mickenbecker said that of those who thought it was a good time to buy, many were expecting prices to continue to rise. They also cited low interest rates as another reason.

“Either way there will be no shortage of buyers as sellers come out,” he said.

“Today the market is overwhelmed with buyers, auctions are intensely competitive, open houses crowded, and unconditional contracts are becoming the norm. Low housing supply on the market has intensified the fear of missing out. We are in a low interest rate frenzy.”

Of the 39 per cent who said they didn’t think now was a good time to buy, 45 per cent said the market was currently in a bubble, inflated or under-supplied.

Mr Mickenbecker said the almost-equal number of respondents who said it was a good time and a bad time to buy indicated the rapid growth was slowing down.

“The Reserve Bank and APRA are likely to welcome a leading indicator of a return to balance, tempering growth and discouraging bank excess, but at the same time strong enough to support sustainable economic growth that won’t implode,” he said.

“The Reserve Bank doesn’t want to hurt the broader economy with higher interest rates and currency and is hoping for healthy property prices to support spending, but at a slower pace, so first-home buyers can afford to stay in the race.”

CoreLogic figures released this week showed the rapid growth had started to slow, but prices continued to grow in every capital city and regional market in April.

“First-home buyers have been anything but deterred from the market and have leapt in with gusto, encouraged by government incentives,” Mr Mickenbecker said. “They are increasingly competing with investors able to make unconditional offers and blow them away at auctions, and would clearly welcome a more stable market.

“The market continues unabated for now, but a slow and steady future is hopefully ahead of us.”

CoreLogic: Home values continue to rise but the pace of growth loses steam in April 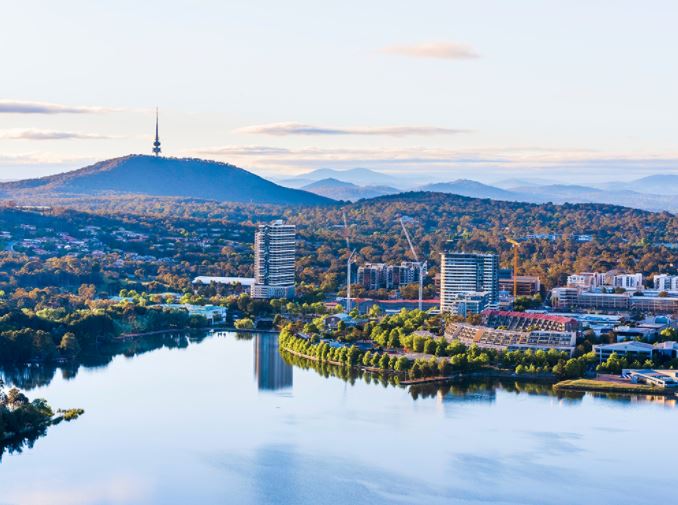 Australian housing values lifted by 1.8% in April according to CoreLogic’s national home value index, with the monthly pace of capital gains easing from a 32-year high in March (2.8%).  Although growth conditions have slowed, housing values are still rising at a rapid pace, up 6.8% over the past three months to be 10.2% higher than the COVID low in September last year.

“The slowdown in housing value appreciation is unsurprising given the rapid rate of growth seen over the past six months, especially in the context of subdued wages growth.  With housing prices rising faster than incomes, it’s likely price sensitive sectors of the market, such as first home buyers and lower income households, are finding it harder to save for a deposit and transactional costs.” 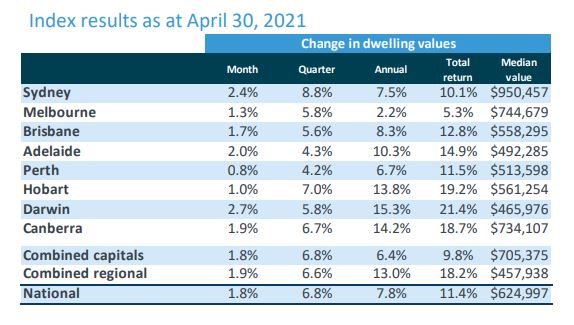 There is already some evidence of fewer first time buyers in the market, with the Australian Bureau of Statistics reporting a -4.0% fall in the value of first home buyer home loans through February, the first drop since May last year.

Despite the slowdown, positive housing market conditions remain geographically broad-based with every capital city and ‘rest-of-state’ region continuing to record a lift in dwelling values over the month.   Darwin (2.7%) and Sydney (2.4%) recorded the largest month-on-month rise in dwelling values, while Perth values recorded the lowest rate of growth amongst the capital cities at 0.8%.

The broad trend of houses outperforming the unit sector continued through April as higher density styles of housing experienced less demand amidst elevated supply across some inner city precincts.  At the combined capital city level house values (8.6%) have risen at double the pace of unit values (4.3%) over the first four months of the year.

“A preference shift away from higher density housing during a global pandemic is understandable, however a rise in flexible working arrangements also seems to be supporting greater demand for houses around the outer-fringes of capital cities.  Relatively weak investor activity, compounded by a supply overhang in some high-rise precincts, is also dampening price growth in unit markets,” Mr Lawless said.