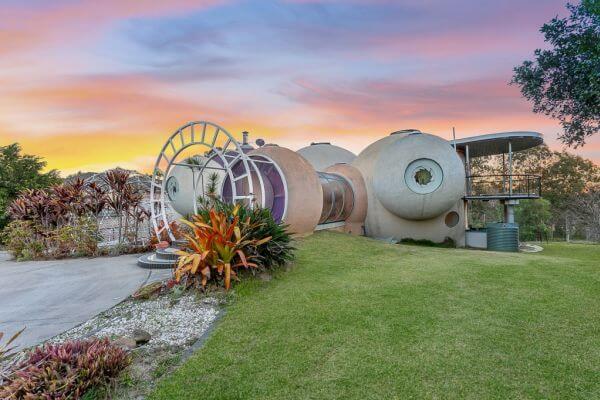 Looking for a home that thinks outside the box?

A one-of-a-kind property dubbed the Bubble House has hit the market for the very first time, drawing interest from across the country and around the world.

The home in Karalee, Ipswich, has grabbed the attention of buyers from as far afield as France since it was listed for expressions of interest on Monday.

More than 30 years in the making, the property spans 11 domes – each from four to eight metres wide – and looks more like a space station than a Queensland family home.

Architect Graham Birchall and his wife, Sharon, started building the property in 1983, two years after Mr Birchall used the bubble house idea for his thesis for his architecture degree in Brisbane.

The couple gradually created the home over 30 years, undertaking major renovations in the late 2000s and even emailing NASA to use their designs on their window shades, the pair previously told Domain. Now they’re selling up their much-loved family home to make a sea change.

While unique in shape, the riverfront property has all the usual homely features with three bedrooms, two bathrooms, a four-car garage and workshop, and a round kitchen – designed by a boat builder and carpenter to get all the curves. 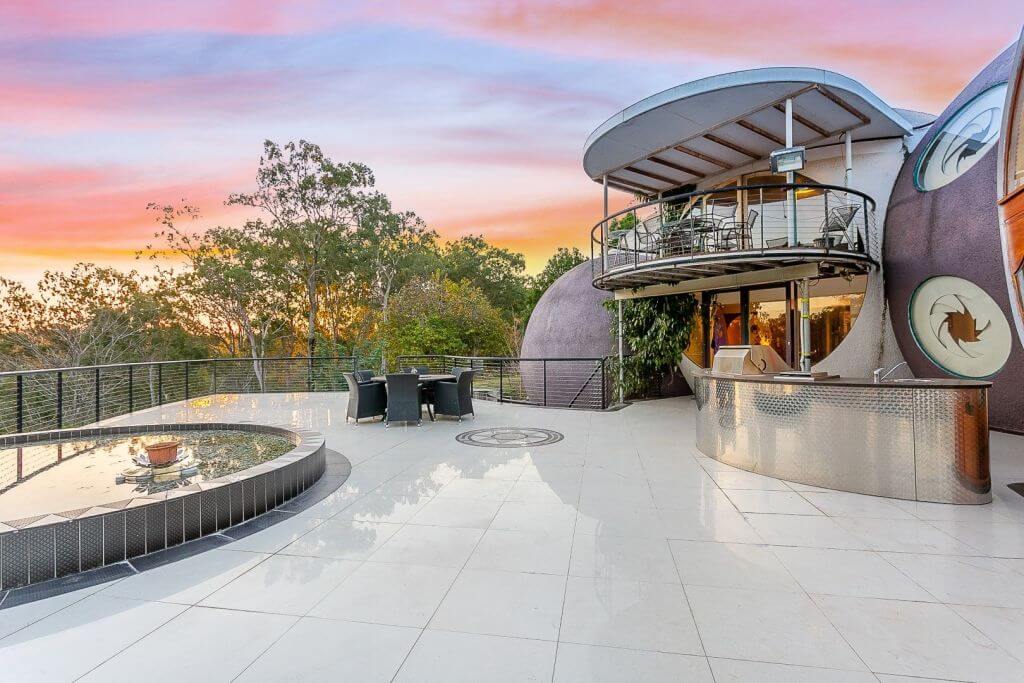 It also includes an office, a media room, library, bar and wine cellar – again all round, of course – as well a glass entry tunnel to welcome you into the home, multiple terraces and a golf tee.

“When you walk in, it changes the way you feel,” selling agent Helene Shephard of First National Real Estate Action Realty Ipswich said. “It has this energy that just calms you and you can have a lot of people in the home without even realising it.” 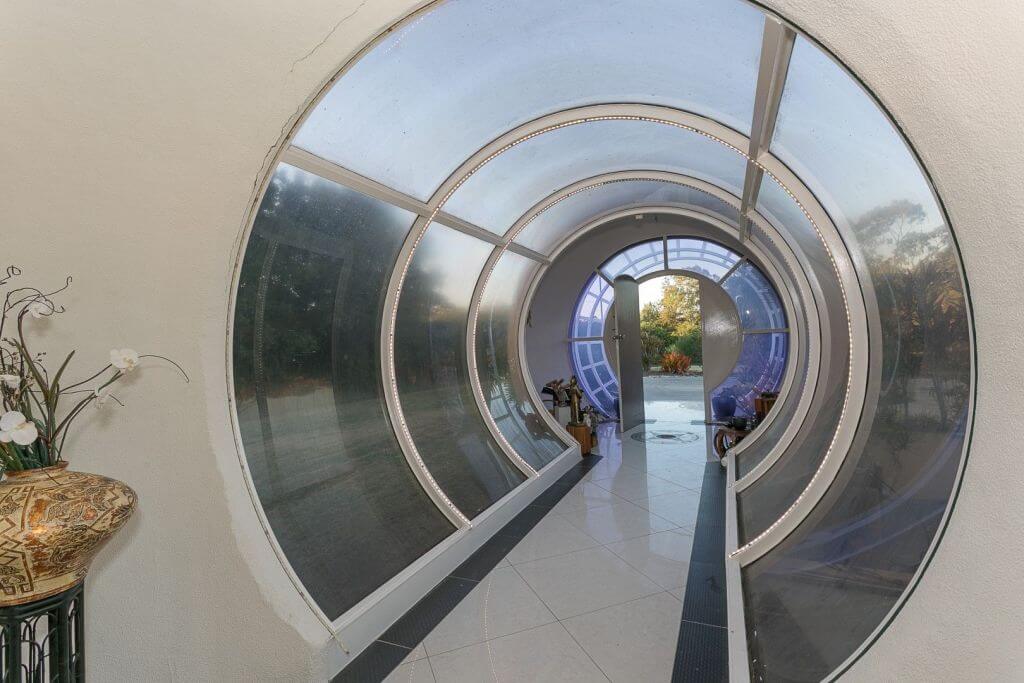 In total the home offers a whopping 1050 square metres of floor space and sits on a 5109-square-metre block about a 40-minute drive from the CBD.

Ms Shephard said she had been inundated with local, national and international interest in the home since Monday.

She’s had many calls from excited architecture buffs asking about the light throughout the property, the form and the function, and also locals who have long hoped to take a peek inside the local landmark.

“I’ve had a lot of local inquiry, from people asking, ‘Can we bring my mum, dad and the kids, I drove past that house every time I was in Karalee … and we’ve always dreamed of seeing inside’.”

Unfortunately, Ms Shephard said, she’s had to shatter their dreams, with the home – still a workplace for the owners – only open for private inspections with serious buyers.

While properties of its size and location typically sell for more than $1 million, Ms Shephard was reluctant to put a price tag on the unique home. 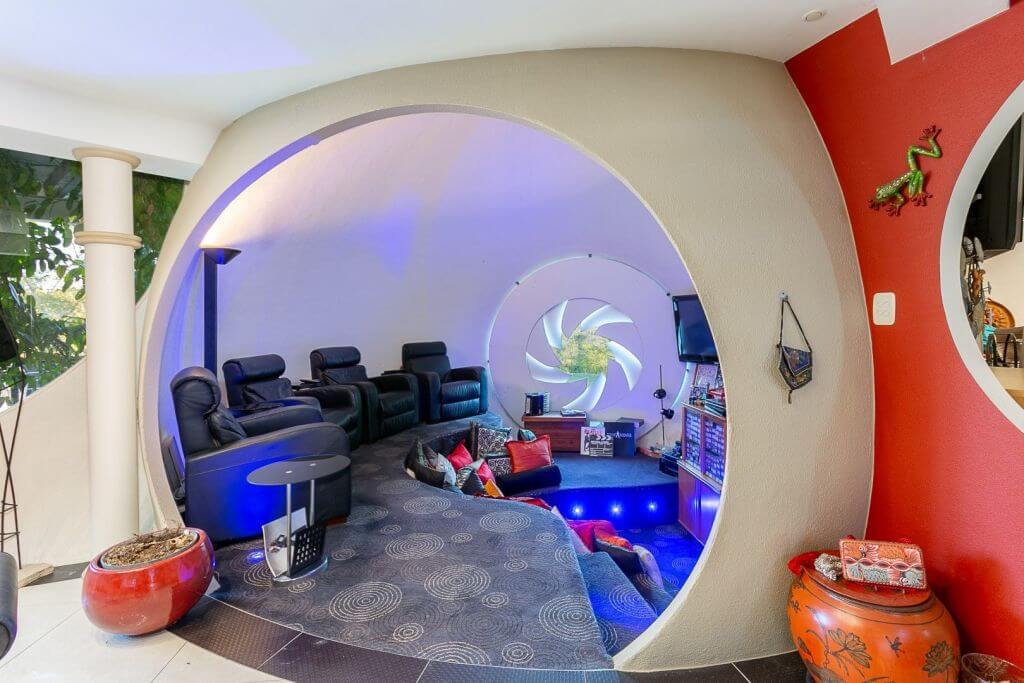 “Graham and his family are looking for the right buyer who will appreciate everything they are gifting on,” Ms Shephard said.

“It’s certainly a once-in-a-lifetime opportunity [for buyers], and for me too to find a buyer,” she added.  “It will be somebody who wants to live in an environment that stimulates them and is creative.”

Although unusual homes can often take some time to sell, Ms Shephard does not think that should be an issue here.

And when they find a buyer, they’ll be sure to celebrate with some bubbles. 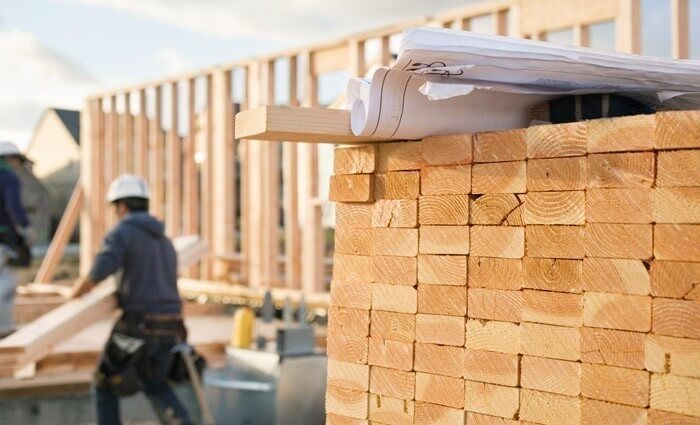 Prices remained relatively stable during the quarter, falling 0.8 percent to a median price of $248,000 compared to the March quarter. 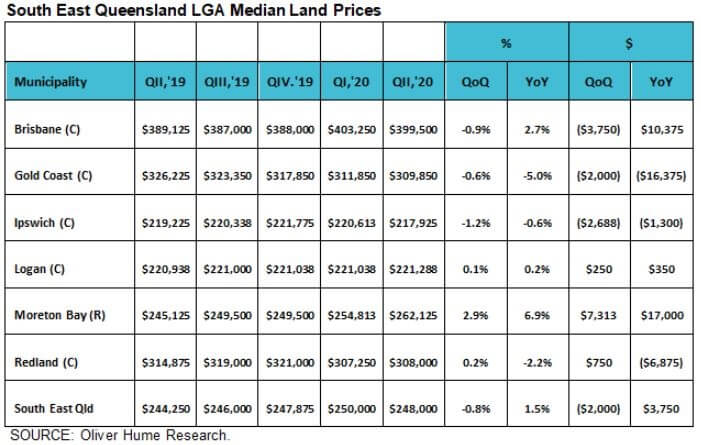 In terms of sales in each region, Moreton Bay moved into the top spot in the South East Queensland land market, taking 26 percent market share. For the first time since March 2016, neither Logan nor Ipswich have claimed the largest portion of sales.

Logan managed to push Ipswich to third place and achieved 24.9 percent of sales while Ipswich collected 24.7 percent, only a handful of sales separated the two regions. This is the first time that Ipswich has been outside of the top two since early 2015.

After dropping to just 273 sales across the south east in April as lockdowns closed sales offices and dented economic confidence, the market roared back to achieve 1,110 sales in June.

The total number of sales for the June quarter was 1,910, up from 1,518 in the March quarter and the strongest quarterly sales since December 2017.

“Despite the Coronavirus shutdowns and their economic impact, there are still plenty of buyers with stable incomes who are more than happy to take advantage of the numerous grants and incentives available,” he said.

“These are the right incentives at the right time and will keep thousands of tradies in jobs as homes begin to spring up on these blocks in the next few months.

“The first half of 2019 was a tough time for the SEQ land market but there was a solid recovery underway towards the end of the year and right up until the lockdowns commenced in the final two weeks of March,” he said.

“With the restrictions lifted and the great incentives in place the pent-up demand is returning.”

The $25,000 HomeBuilder grant combined with $15,000 first home buyer grant from the State Government, means eligible buyers can access $40,000 to help them get on the property ladder. Other incentives, including the First Home Loan Deposit Scheme (FHLDS), can save buyers thousands more on top of the grants. 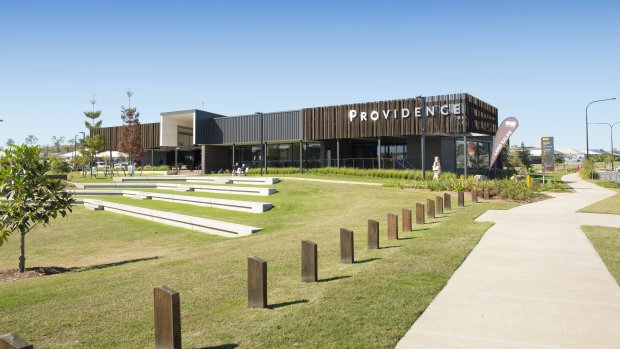 With an asking price understood to be in excess of $200 million and the ability to generate a further $2 billion in lot sales over the next 20 years, the estate is expected to generate interest from large corporate developers and major private groups.

Since construction commenced in 2013, more than 1300 homes have been completed by the Shephard family’s Okeland and its long-time investment partner, WA-based Cotswold Investments, a group of family companies chaired by Gavin Bunning, whose family started retail chain Bunnings.

In 2015, the same investment partners sold a 123-hectare partially developed estate in Tarneit in Melbourne’s west to ASX-listed Peet for $90 million.

Providence is about 10 kilometres west of Australia’s largest master-planned city, Greater Springfield, which is being developed by Financial Review Rich Lister Maha Sinnathamby. In January, Mr Sinnathamby appointed Moelis to find a partner to complete the $88 billion project.

Okeland has appointed Biggin & Scott Land’s Frank Nagle and Andrew Egan along with Ray White Special Projects’ Tony Williams and Mark Creevey to sell the Providence estate via an expressions of interest campaign.

Okeland executive director Cameron Shephard, whose father David started the business 40 years ago (it was previously called Amex Corporation), told the Financial Review the founding investment partners decided to sell following a review of their portfolio.

“We’d like to reinvest the proceeds in future new communities and find the next Providence. That’s what we are really good at – envisaging and creating,” he said.

There is capacity for a further 6000 homes to be completed at Providence over the next 20 years.

On completion, the community will include more than 200 hectares of open space and parklands, a major retail town centre, a commercial precinct, four schools (two of which opened in January 2020), a health and wellbeing hub and a sport and recreation precinct.

Okeland’s other projects include a 2500-lot Kingsford estate in Perth’s north-east.

Biggin & Scott Land managing director Frank Nagle said it was rare for an offering of this size to come to market.

“The most recent comparable transaction was The Grove Estate in Victoria which we sold in 2018 for circa $200 million with almost 2000 lots,” he said.

This article is republished from www.afr.com under a Creative Commons license. Read the original article.

Connectivity is key to transforming the Ripley region over the next decade, with Ripley Town Centre at the heart of a 25-kilometre public transport corridor from Ipswich Central to Springfield Central, providing residents with affordable access to surrounding communities and ensuring new cities are being built, not just sprawling suburbs.

The timely provision of the rail extension is vital to lead and sustain communities in the Ripley Priority Development Area (PDA).

This critical “enabler project” will seamlessly link the region and provide much-needed connectivity in one of Australia’s fastest growing areas.

“The I2S Corridor is vital infrastructure of national significance and we cannot afford to delay its progression any further,” Harding said.

“If the project does not proceed, excessive congestion will cost in excess of $1 billion per annum and the regional road network will fail by 2031.

“We need state and federal government support to continue to enable the progression of the project to the options analysis stage, which Council estimates will cost approximately $2.5 million.

“The I2S Corridor will undoubtedly shape south-east Queensland and the state more broadly.”

The I2S Corridor is considered the region’s highest priority infrastructure project to meet the needs of future population growth.

Federal member for Blair, Shayne Neumann MP said the project presents an opportunity to deliver a public transport solution that addresses current and emerging growth across the region.

“The rail extension will link the three fastest growing suburbs between Brisbane and Ipswich—Springfield, Redbank Plains and Ripley,” Neumann said.

“It’s the missing link—crucial for the growth of the region.

“There needs to be greater government investment on infrastructure projects like this one for the purposes of job creation and economic development.

“You can’t build a community without the necessary transport infrastructure, otherwise you just end up isolating people and we’ve seen enough of that recently.”

Sekisui House Australia project director Taku Hashimoto said the delivery of a public transport solution for the growing community of Ripley and the surrounding areas now, will ensure the opportunities for integrated land use development are maximised, especially along the I2S Corridor.

“Ultimately, the rail is critical to the future of the Ripley region and south-east Queensland with population growth in this corridor already among the highest in Queensland.

“Without the rail, you just end up with a sprawling suburb instead of what was planned — a pattern of unique settlements that drive economic opportunities for the people who live in the area and the businesses that operate here too.”

Ripley is considered one of Australia’s major growth areas. The suburb’s population is projected to increase at a rate of 27.6 per cent each year until 2026 and the broader Ripley Valley region will see approximately 133,800 new residents by 2036.

“The rail will offer the community affordable transport choices that improve people’s access to services, employment and education,” Hashimoto said.

A Ripley Valley 531 bus route was also introduced in 2019 as part of a five-year, $6.6 million investment by the Queensland Government, acknowledging the need for transportation options outside of already congested local roads.

With technology and policy shifts also dramatically changing the way people move now and in the future, Ripley Valley’s strategic transport system—roads and public transport—will need to be strongly connected.

This not only benefits users in the short-term but provides a much more resilient region in the longer-term.

The enhanced public transport offering will also contribute to the preservation of the Ripley region’s social fabric and provide a fast-growing population with a much-needed alternative.

The proposed I2S Corridor rail extension, will play a critical role in shaping the future of this booming region.

Ripley really is the missing link.