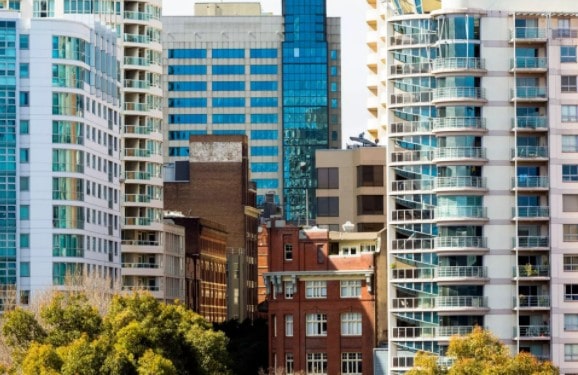 Central business districts have taken another blow, with residential vacancy on the rise and rent falling by 3.1 per cent for houses and down 5.5 per cent for units during September.

Melbourne is at a new all-time high of 10.8 per cent, the Brisbane CBD vacancy rate also increased to 12.5 per cent, however Sydney is slowly dropping, from 12.9 per cent in August to 12.8 per cent in September, according to SQM Research.

This is the polar opposite of the extremely tight markets seen in Australia’s other capitals and regions, which sit below one per cent.

On a national scale, residential rental property vacancy is at a mere 2 per cent, with 70,389 vacant properties, down from 2.1 per cent in September 2019.

Rent has also moved up by 4.8 per cent for houses and 1.7 per cent for units on average during the past year.

SQM Research managing director Louis said the population is still looking to stay away from the large cities.

“We think this trend may soon reverse, but to what extent remains a mystery,” Christopher said.

“Elevated rental vacancy rates in Sydney and Melbourne continue to push city rents downwards—this is particularly the case in the CBD and inner-ring suburbs close to the CBDs.

“However, outside Sydney and Melbourne vacancy rates are falling again.

“And then when we consider regional locations, vacancy rates have fallen below 1 per cent which really represents the point of little to no rental vacancy.”

Despite initial predictions of huge falls in house prices early on in the pandemic, the residential market has been buffered by government stimulus packages, with the market starting to ease and even turn around in some cities.

However, the Reserve Bank expects rental growth to remain subdued through 2021 as restrictions on international migration affect vacancy rates.

Migration will have the biggest impact on metropolitan markets while regional and satellite markets experience a increase in transactions and rental growth.

This article is republished from theurbandeveloper.com under a Creative Commons license. Read the original article 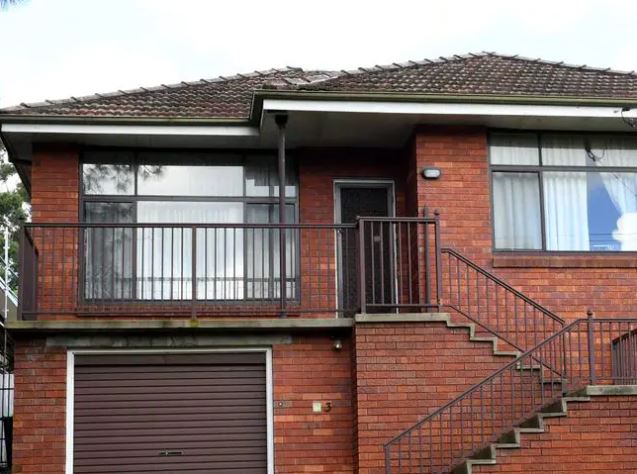 The property market is so squeezed in one state at the moment that Aussies are taking desperate measures to simply secure a home.

Desperate renters are being squeezed out of the Gold Coast and Brisbane rental markets, with some forced to stay in cars and caravan parks, agents say.

Dozens of potential tenants are competing for scarce rental properties with some offering up to $50 more than the asking price to secure a home.

First quarter results for 2021 show 70 per cent of Queensland’s rental vacancies remain under one per cent according to Real Estate Institute of Queensland figures released in April.

“There’s an over demand of tenants and lack of stock,” said Carmen Kennedy from Coomera Realty on the Gold Coast.

Two recent rental properties on the Gold Coast’s Coomera area both drew more than 40 people to inspections, she said.

“They weren’t aware, they thought it would try and help them get the property over other people applying.

“They were just so desperate, staying in cars and sleeping at caravan parks. It’s been pretty tough couple of months for people out there.”

The development is being driven by record-low rates, government support measures and a pandemic-driven migration, pushing Brisbane’s private rental market’s vacancy rates to their lowest levels since October 2012, the REIQ says.

In the last year, rental vacancies dropped 1.1 per cent across the Brisbane local government area, while Greater Brisbane saw the market tighten by 0.9 per cent.

Meanwhile, the Gold Coast rental market tightened to reach a record low of 0.6 per cent in the last 15 years of data records. The western suburb of Oxenford had the lowest vacancy rate of just 0.1 per cent.

Ms Kennedy said advertised on its rental promotional material for people not to call or email the agency because it was so overwhelmed.

“We received over 200 inquiries per property, so it’s just too overwhelming for us to do our job to try and speak to every single person who’s interested in the properties,” she said.

“That was probably six weeks ago now and we haven’t had another available property since then.

“We’ve had lots of people crying to us, begging for properties, leaving domestic violence situations and having to get accommodation for them and their kids.

“It’s pretty hard to have to process those applications.

“Everyone has a bit of a situation at the moment where they don’t have friends or family to stay with, so they’re in caravan parks or staying in short term accommodation and it’s costing them double the rent if they were renting a normal house.

Natgroup Real Estate in the Gold Coast suburb of Helensvale has a register of more than 1200 people looking for a rental property.

Manager Edgar Natolo said people were applying for properties without seeing them in person, based on the online ad alone.

“We’re now leasing them to pre-approved tenants, so they’re not even hitting the market,” Mr Natolo said. 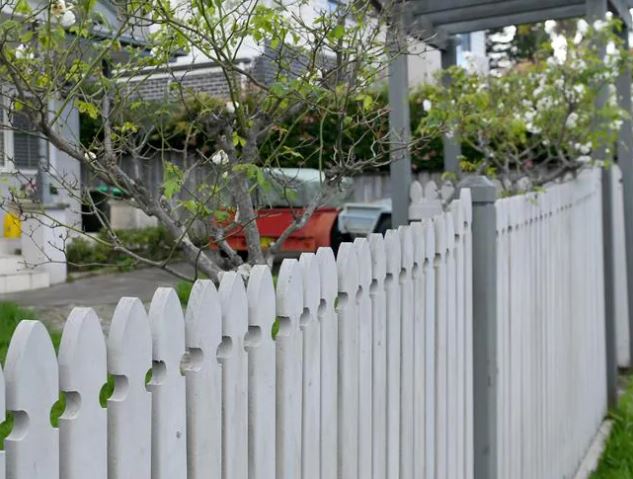 People are being forced to stay in cars or caravan parks due to the competitive rental market, agents say. Picture: NCA NewsWire / Jeremy PiperSource:News Corp Australia

“You probably get 60 inquiries in one day and 30 turn up for the open home inspections, and by the time you get back to the office you’re flooded with applications.

“It is a bit sad because a lot of them do cry when one of the girls rings them up and says they’ve missed out.

Tenants Queensland CEO Penny Carr said some renters were being asked to leave without grounds, then seeing the property have a significant rent rise.

“Some of those people might have been living there for some time, paid the rent all the time and then asked to leave,” she said.

“Then they’re turning up to inspect properties and there’s large numbers of people there and they’re having to put in multiple applications.

“That’s pretty stock and standard in terms of reports I’m getting from across the state.”

Ms Carr said some renters were offering long periods of rent upfront, which agents aren’t allowed to ask for, but can accept.

“Sometimes there’s subtle encouragement for offering up higher rent or a longer period of rent upfront,” she said.

Ms Carr said some renters were being taken to the tribunal for not moving out while others were staying at inappropriate accommodation like boarding houses or couch surfing.

The situation was preventing renters from asserting their rights, for fear they would be pushed out and would have to find another property.

“You don’t ask for repairs, you don’t push for things you need or want in the property,” she said.

“You don’t assert your rights, basically.” 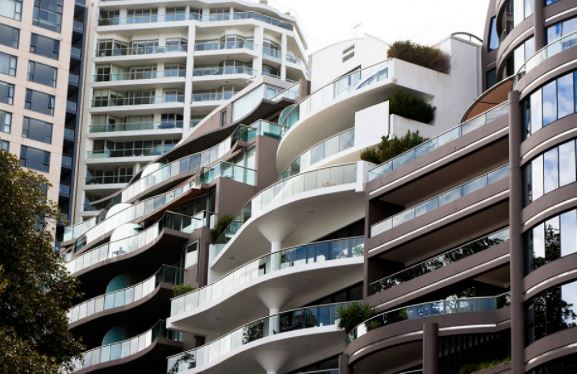 The highs of Australian house approvals have been joined by the apartment sector, with a huge increase recorded.

The number of multi-unit dwellings approved in March jumped 63.6 per cent, the biggest increase since November 2017, according to the Australian Bureau of Statistics.

New house approvals remained at near-record highs, edging up by 0.1 per cent to 14117, an increase of just nine houses on February’s results.

Total dwelling approvals rose in New South Wales by 26.9 per cent, Victoria 24.7 per cent, Queensland 12.1 per cent and South Australia 3.5 per cent, in seasonally adjusted terms.

Western Australia and Tasmania fell -6.4 per cent and -4.8 per cent respectively. 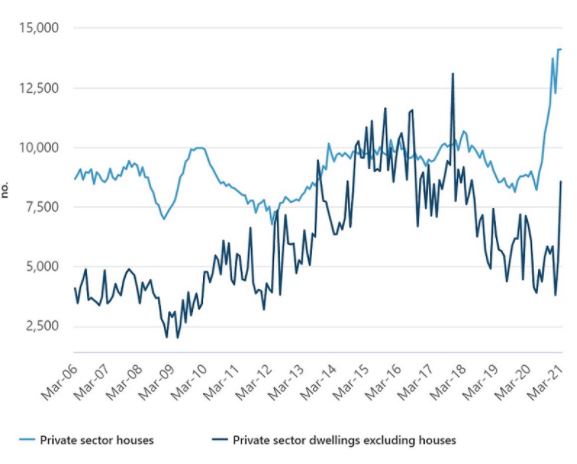 “The total number of dwellings approved in March was the second-highest recorded, only exceeded by the November 2017 result,” Rossi said.

“The number of private sector house approvals also remained at elevated levels due to HomeBuilder. 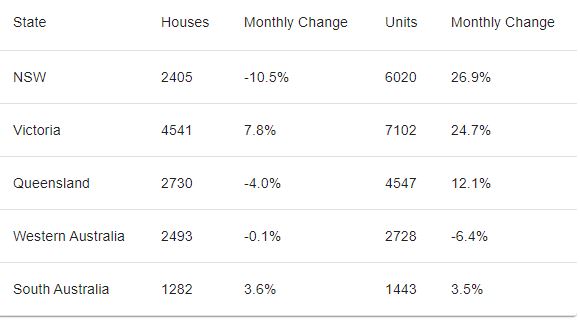 Commonwealth Bank senior economist Kristina Clifton said the end of HomeBuilder on March 31 would have an impact on new house approvals.

“We expect approvals for houses to drop off relatively sharply during the next few months as many people who were looking to build a home would have brought this decision forward in order to receive the grant,” Clifton said.

“Nonetheless, record low interest rates will continue to support the demand for dwellings.”

Speculators back in the game to push up property prices 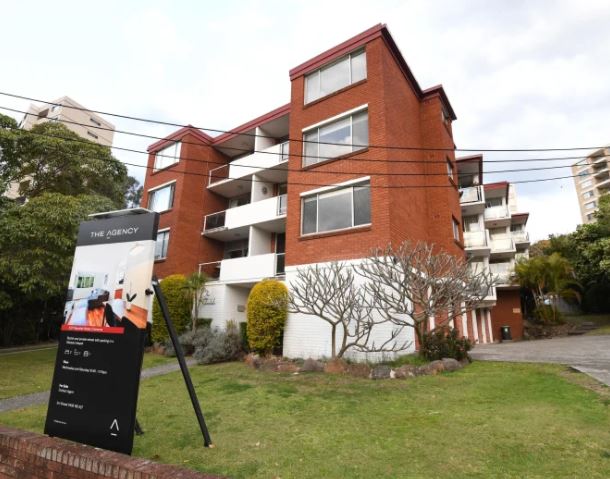 Investors in residential property have come out of hibernation and were the driving force behind the record 5.5 per cent increase in housing finance in March.

Having kept a low profile during the pandemic, investors and speculators are now returning to the market with gusto. And that suggests only one thing – home prices will continue to be pushed higher.

The colloquial definition of what turns a housing boom to a housing bubble is the increasing participation of investors. Judging by the latest numbers from the Australian Bureau of Statistics (ABS) investors could soon replace first home buyers as key drivers of the red-hot property market.

And the phoenix-like rise in housing investors has coincided with early signs of a peak in demand for finance by first home buyers whose participation in the housing market appears to be running out of steam. In March first home buyer finance fell by 3.1 per cent (seasonally adjusted), according to the ABS.

The levelling out of first home buyer demand was only ever a matter of time as this group would ultimately come up against the barrier of affordability.

Government assistance and low interest rates spurred demand from first home buyers last year but as prices have moved up the window of opportunity has narrowed. Meanwhile, some of the robust demand from those making their first move into property is thought to have been pulled forward.

Investors deserted the residential property market in response to COVID as rents and returns fell as did values in the early stages of the pandemic. The apartments segment was hit particularly hard as immigration disappeared.

While rents remain at historically low levels, there are clear signs that rental increases are starting to come through – particularly in the outer suburbs of capital cities, the smaller capitals and in regional areas. In March rents rose by 0.6 per cent in Sydney and by 0.2 per cent in Melbourne according to CoreLogic

But the broader enticement for investors is capital gains on offer in the housing market, which is now in full swing. Prices nationally rose by 1.8 per cent in April and by 2.8 per cent in March and careered ahead 6.8 per cent over the past three months.

For big banks lenders the return of the residential property investor could provide them a new source of demand growth in the event the first home owner market continues to run out of puff.

Despite historically low interest rates, the banks say they are not seeing any deterioration in the quality of their loan books. This is despite intense competition among bank and non-bank lenders to capitalise on the demand for housing finance driven by low rates.

Westpac’s accounts for the six months to March, which were released this week ,showed that only 2 per cent of customers were behind on repayments – a level that has remained the same for a year.

For the most part the banks are arguing that there is no need to apply any macroprudential brakes to the housing market.

But history tells us the rise in investor participation also sets off alarm bells within the regulatory agencies, the Australian Prudential Regulation Authority (APRA) and the Reserve Bank.

Both have been disinclined so far to wade into the rapidly heating property market and introduce measures that will hamper first home owners. But regulators have plenty of form in targeting the more speculative investor cohort with macroprudential tools. And the banks will need to avoid the riskier lending that has traditionally been associated with financing investors.

’The resurgence in investor financing and the continuing surge in owner occupiers who are trading up points to further near term strength in home prices,” according to AMP chief economist Shane Oliver.

“It also points to a further acceleration in housing debt, a further rise in the share of interest only loans and increasing lending at high loan to valuation ratios. All of which is increasing pressure on the RBA and APRA to move to tighten lending standards in order to head off increasing risks of financial instability – which we expect to occur sometime in the next six months.”