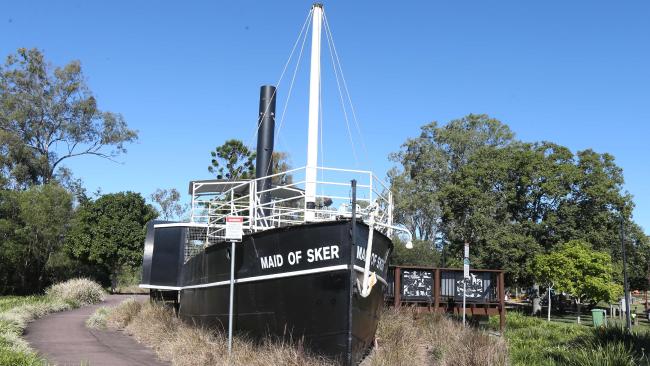 On the gateway to the Gold Coast is Nerang, a residential suburb in the west surrounded by trees and divided by the Nerang River. The picturesque suburb, popular for its lakeside parks, bike facilities and horse trails, is dotted with cafes and boasts historic river relics.

“It’s one of the Gold Coast’s most diverse suburbs of people,” Jane says.

“There are young families, retirees and singles and it has a real country feel about it but it is still incredibly central.”

The Nerang National Park will be an important part of the Commonwealth Games.

“They will have bike trails in the national park for the cyclists competing in the Commonwealth Games,” Jane says. “I’m always seeing kids on bikes, and the BMX circuit is packed over the weekend.’’

Secretary of Nerang Country Paradise Association Martin Collis says the suburb is a residential paradise on the riverbank.

“It is a growing suburb and it is very community-orientated,” he says.

“It has had a bad reputation over the years but Nerang is growing into a family-orientated residence with a mix of million-dollar homes and young families.”

Jane has been selling property in Nerang for the past 28 years and says there is still availability, with new estates opening offering residential blocks.

“It will certainly change the face of Nerang,” she says.

“The suburb has changed a lot, it had a reputation but it has become a hot spot and I think one of the biggest appeals is the M1.”

Proposed development in Nerang includes Burchill Park on the Nerang River which has been earmarked for a 12-storey development featuring two buildings along with an application lodged by developer Nifsan to build one of the largest single developments on the Gold Coast at the Villa golf course site.

According to Martin, the Nerang Country Paradise Parklands was previously a theme park.

“The council bought the land and now it is now run by community groups with over 300 members,” Martin, 55, says.

He says the suburb has retained much of its history, including the 140-year-old Nerang courthouse and river steamboat Maid of Sker.

“The suburb was actually the original settlement of the Gold Coast before Southport,” he says.

The paddle steamer, which sailed between Brisbane and Nerang for nearly 90 years and is thought to be the last of its kind, now sits in a Nerang park.

Martin says the central location of the suburb is its biggest appeal.

“On the weekend I was in Broadbeach one day and Mt Tamborine the next,” he says. “It is very central and I still have a country lifestyle.” 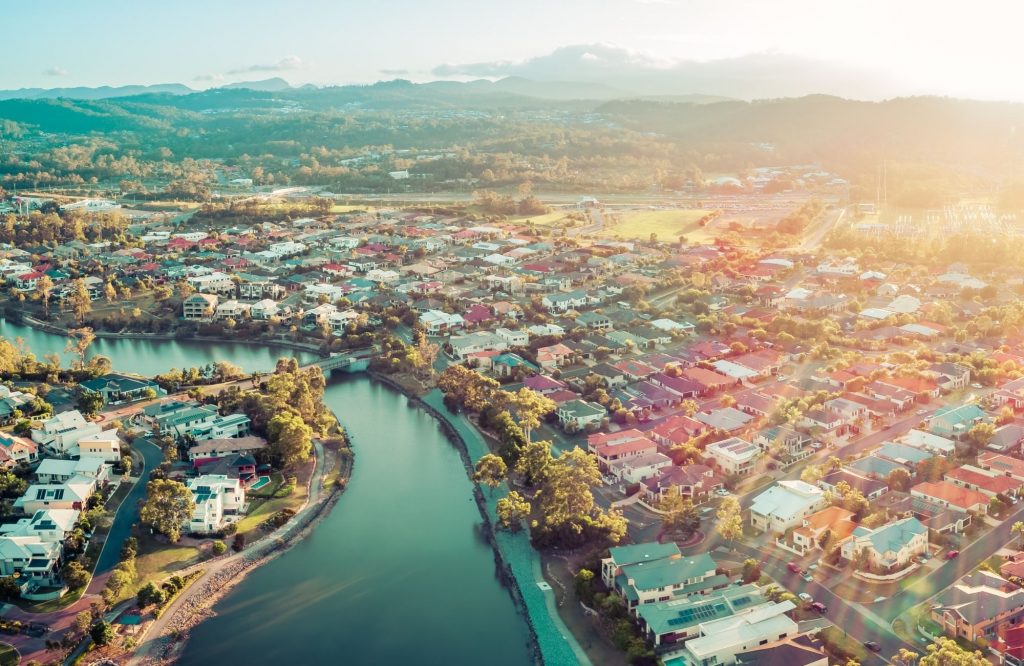 Buyer demand has significantly jumped compared to last year across all capital cities aside from Melbourne.

The Domain buyer demand indicator shows that the market has rebounded in recent months—revealing the top suburbs piquing buyer interest.

Houses and apartments in the outer-suburban areas of Sydney, Melbourne, Brisbane and Perth, were the highest in demand for the month up to 6 September.

This follows a state of hiatus caused by caused by Covid which is ongoing in Victoria where restrictions have stopped inspections and dropped listings.

“The current health crisis has changed the way we use our homes, and for some altered our purchasing decisions and property wish lists,” Powell said.

“And while Covid-19 lockdowns sent buyer demand into a state of hiatus, activity from people likely to buy has rebounded in all capital cities apart from Melbourne.”

Meanwhile major gains have been made in national vacancy rates to pre-Covid levels with outer suburbs also showing the most improvements.

Residential property prices dropped by 1.8 per cent in the latest quarter according to the Australian Bureau of Statistics.

Hobart was the only other city to record a fall in activity over the four week period to 6 September, along with Melbourne, where the most demand was seen for Sorrell-Dodges Ferry and Hobart. 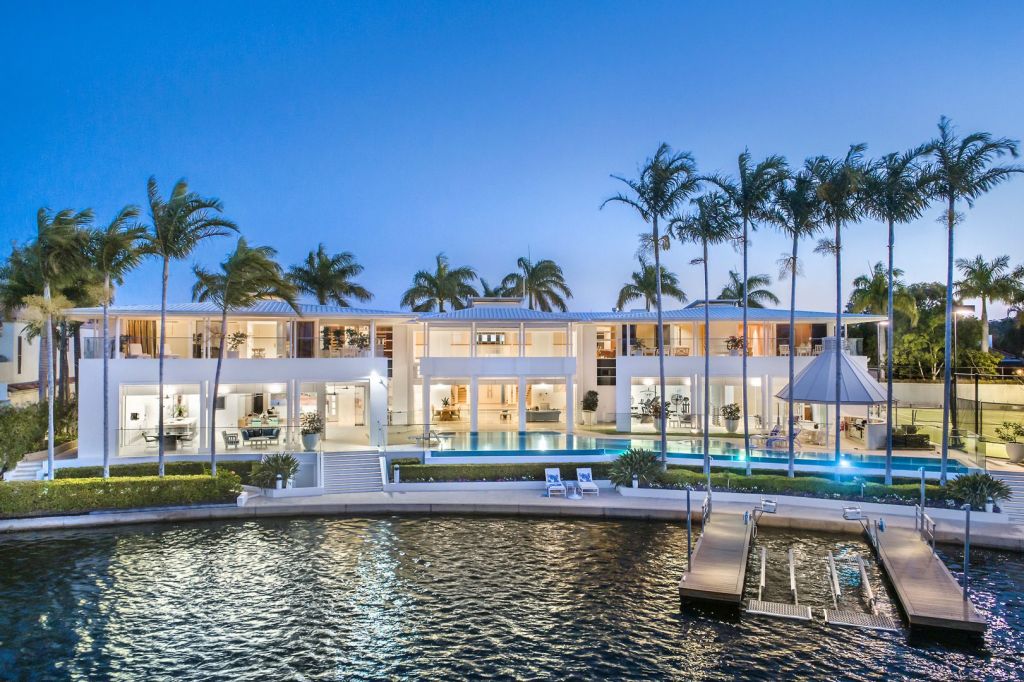 The COVID-19 storm has spawned a hurricane of home sales across some of the Sunshine Coast’s hottest tourist magnets as property punters report unprecedented buyer action from city-based sea-changers in search of a pandemic-free paradise.

The rise of remote work and virtual inspections amid record low interest rates has further sparked the coastal migration with popular hub Noosa clocking millions of dollars in sight-unseen sales alone during the past month.

Adrian Reed, from Reed & Co Estate Agents in Noosa, said buyers from Brisbane to as far away as Hong Kong had pounced on the region’s high-end market, with the agency transacting $60 million in sales from April until August.

“It feels like there’s a gravitational pull towards those idyllic locations … and this trend has continued throughout COVID,” Mr Reed said.

“We sold $26 million in the past couple of months alone sight unseen.

“They are buying from abroad and domestically and then from Brisbane … and I think it’s likely to continue.”

He said the skyrocketing sales action had particularly centred around Noosaville, with $6 million of off-market property sold in the past six weeks.

The agency also clocked the latest Noosaville record for the spectacular mansion at 32-36 The Anchorage, which fetched $12 million. The property features 13 bedrooms and was the former home of the late businessman and founder of Hayco, Donald Hay.

“The average time on market for us has shrunk back to three weeks and most of our auctions are not even getting to auction,” he said.

“We had a sale for an apartment on the weekend where the reserve was expected to be $5.5 million but it sold for almost $6.5 million.

“Our biggest one was the sale of 46 Seaview Terrace which was Pat Rafter’s previous home – and that was sold in excess of [a record] $17 million at the end of May to the Rudds. They just saw the long-term value of Noosa.” 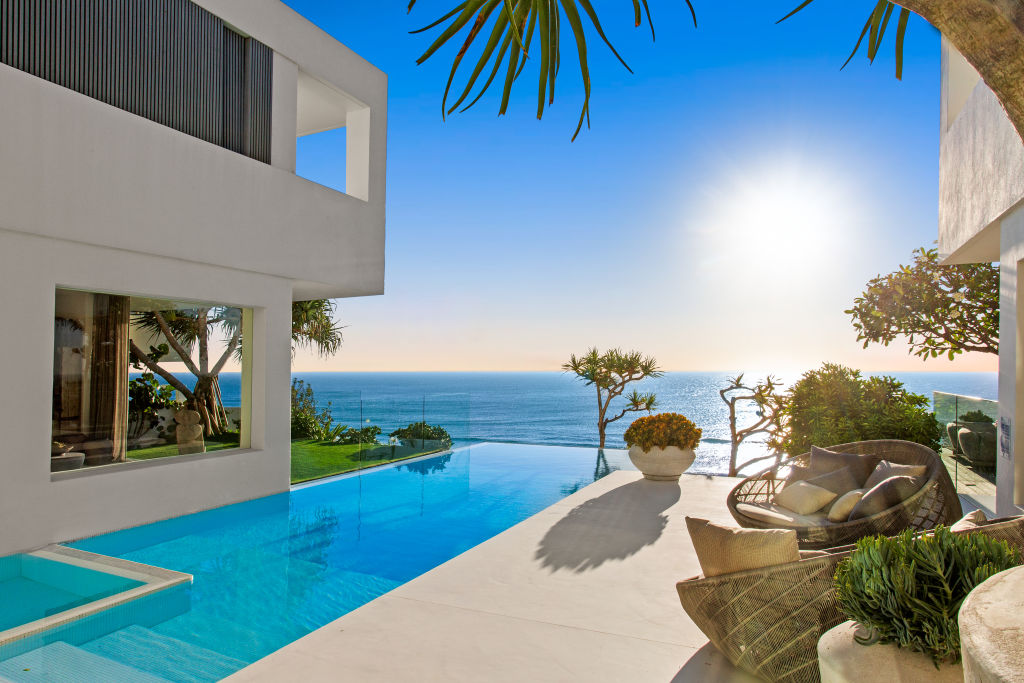 Mr Neylan said interstate buyers were particularly snapping up homes like hot cakes with the agency handling more sight-unseen sales than ever before.

He said many home hunters claimed the growing work-from-home-movement had finally allowed them to have a remote career from an idyllic place – and they were wasting no time pouncing on regional, coastal destinations.

“The future for us is pretty rosy and that’s going to last for the next two or three years and by then the international airport will be finished,” he said.

“This winter was like no other and out of the disruption caused by COVID came a storm of buying activity,” he said.

“We’re also seeing capital growth rates between 10 and 15 per cent … with the hot locations typically on the riverfront and the beachfront.” 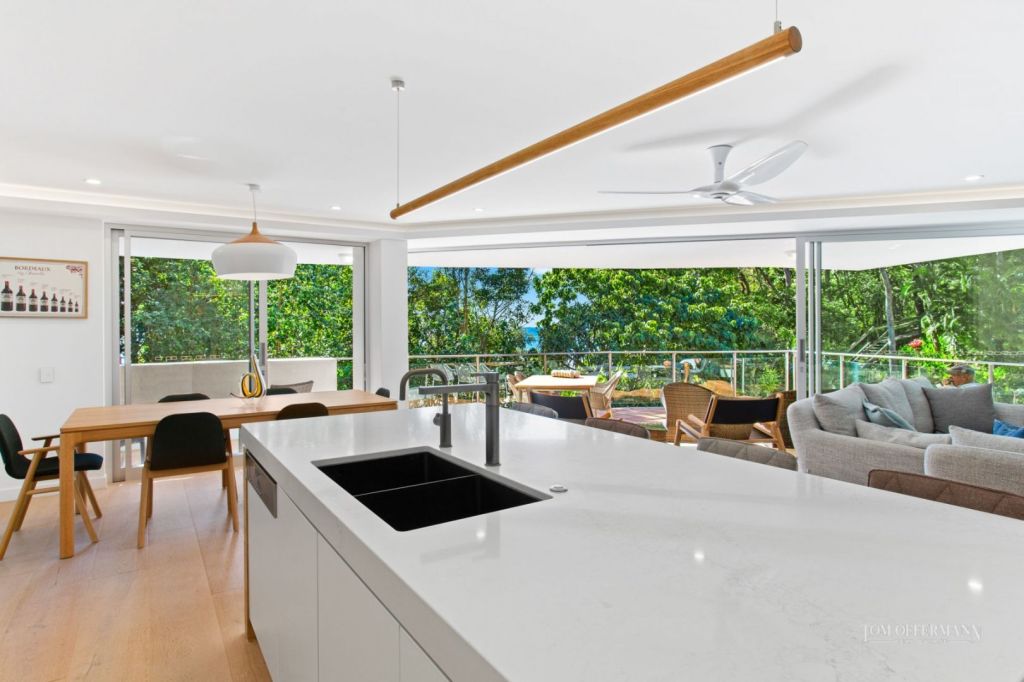 “This sale capped off another very successful week … with a string of high-value sales which included two breaking $10 million.

“There’s also been a string of nine sales between $5 million and $12 million but we can’t announce them yet because they haven’t settled.”

Despite the strong selling activity Mr Offermann said their agency was running at about 50 per cent of their normal stock levels, with nervous vendors still reluctant to pull the trigger amid the global uncertainty 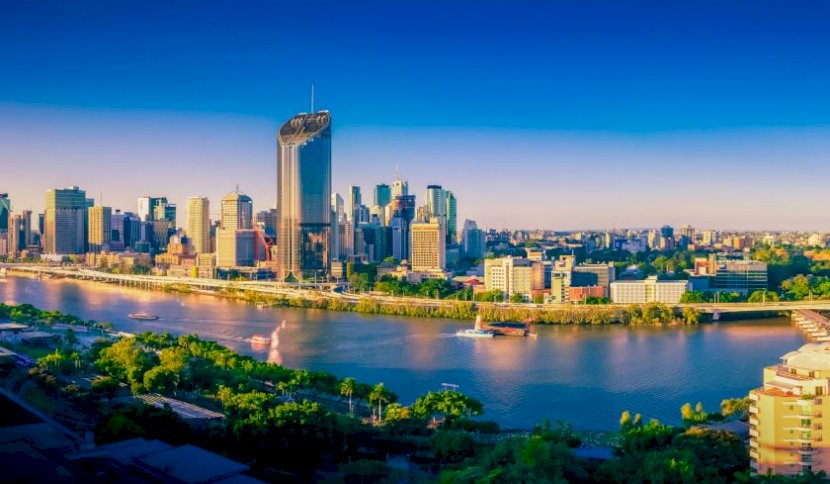 The latest Corelogic Data shows overall dwelling values in Brisbane declined -0.1 per cent, but houses were stable and the decline came from the unit sector, down -0.3 per cent. Since January, Brisbane house values have reported an increase of 1.6 per cent, despite the pandemic, and yet unit values have slipped -1.8 per cent. 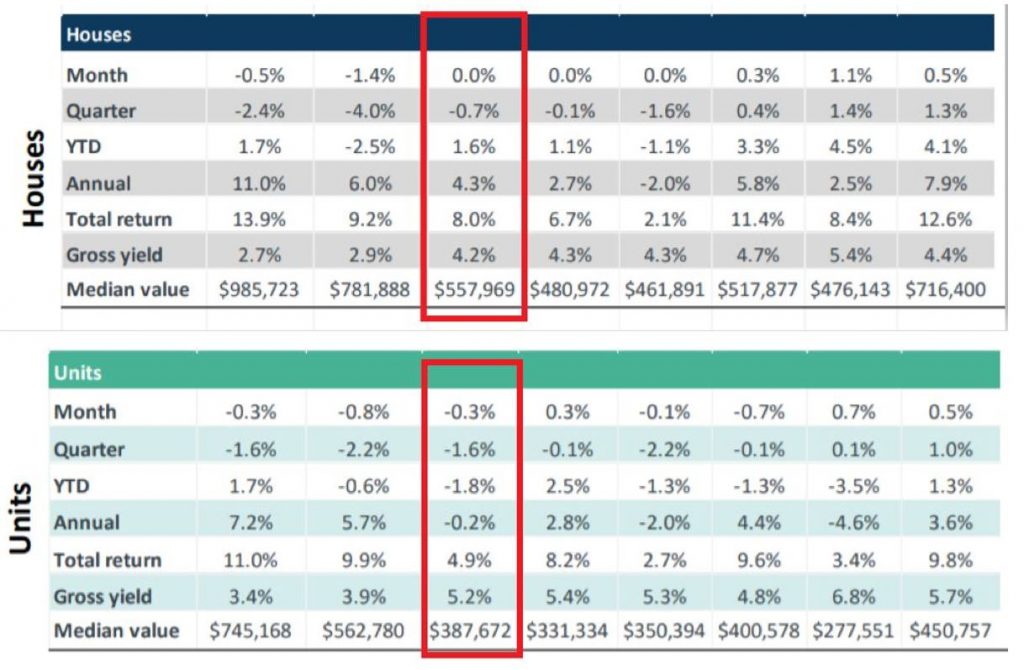 This stability has been seen in Brisbane, despite very early predictions from many of price falls across all Australian markets. The price changes in Melbourne have been more pronounced, with -4 per cent coming off the value of houses and -2.2 per cent off units over the last three months. On this basis, it seems that the performance of the housing market is intrinsically linked to the number of coronavirus cases in a particular region and the subsequent policies in place around social distancing. Stage 4 shutdowns seem to have had a big impact in Melbourne.

That said, in Brisbane, despite small cluster outbreaks from time to time, our strict border control measures appear to be keeping the virus under control. Most of us are able to return to the labour market, sentiment is fairly strong and we seem to be able to move around with a certain degree of freedom. This is all very positive for our local property market as well.

According to SQM Research, listing volumes are still 9.7 per cent lower in Brisbane than they were 12 months ago, and in the last month alone (between July and August 2020) listing volumes were down a further 5.1 per cent so we expect transactions volumes will remain low for some time yet, simply due to limited supply.

New research from realestate.com.au has revealed that Queensland property seekers are the most confident buyers in Australia. In Brisbane the suburbs with the highest views per listing according to realestate.com were as follows:
• Ashgrove Qld 4060
• Kalinga Qld 4030
• Chandler Qld 4155
• Holland Park Qld 4121
• Tarragindi Qld 4121
• Stafford Heights Qld 4053

We can confirm from being on the ground that these areas have strong demand from buyers with many properties going to multiple offer very soon after being listed. These are some of the areas that are outperforming, with upward pressure on prices. The high number of buyers, combined with limited listings, tends to have this effect.

The rental market in Brisbane remains resilient also at this time. We are seeing the vacancy rate at a city level continuing its downward trajectory, after an initial spike from March to April 2020. 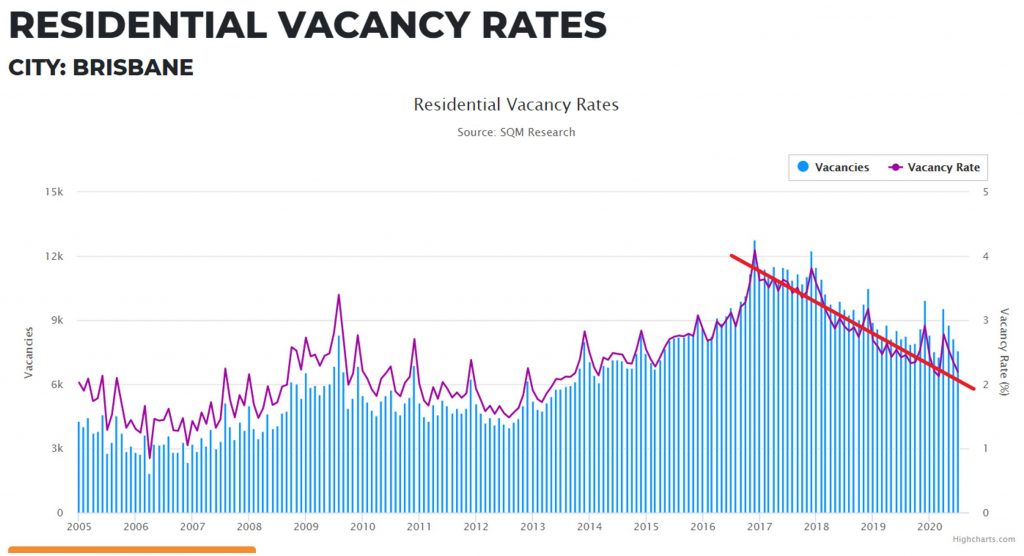 Since then, rental markets have tightened, with many markets across Greater Brisbane experiencing the tightest vacancy for many years. We are also seeing multiple applications from prospective tenants being submitted on properties for rent, illustrating the shortage of quality rental properties available.

There remain some “at risk” locations in certain pockets of Brisbane. For example, postcode 4000 (which includes the Brisbane CBD) has a local vacancy rate of 13 per cent, which is extremely high-risk for an investor who may be looking at buying into that market.

While there is no evidence of distressed properties coming to the market in Brisbane, there continues to be talk about the economic cliff that is apparently ahead of us. Once JobKeeper and JobSeeker payments ease, and mortgage repayment deferrals stop, perhaps some people may need to sell as they are no longer able to hold their property. We remain of the opinion that different markets around Australia will be impacted in different ways.

According to a recent NAB announcement, Australian Home Loan deferrals are broadly in line with the total portfolio spread. This means the exposure of some states to potential “forced selling” is much less than other states around the country.

This provides a greater level of confidence for property owners and property buyers in Brisbane, given our exposure is a lot less than other locations around Australia.

Over recent years, Brisbane’s growth has been underwhelming compared with Sydney and Melbourne, for example. While the other capitals experienced amazing capital appreciation, Brisbane property values remained quite flat. This is because local drivers of supply and demand vary considerably between different locations. Different property markets behave in different ways during various market conditions, so there is no reason to expect the outcomes to differ considerably throughout this pandemic.

Brisbane properties are more affordable and our income-to-debt ratio is a lot lower. The amount of our take-home income that we spend on our mortgages here in Brisbane is also a lot lower. Property markets around the country are all responding differently as a result of the pandemic, and at this stage we remain optimistic about the performance of Brisbane in the months ahead.