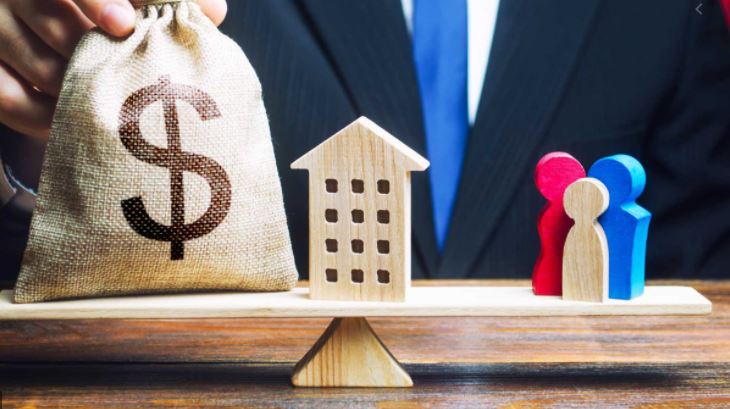 And there could be more home loan interest rate rises to come.

While the Reserve Bank is not expected to lift interest rates until 2024, the cost of long term money for the banks is rising meaning longer fixed-term loans to consumers are already on the rise – with only a handful of lenders still offering the ultra-low rates reached last year.

Rate increases are part of a border trend

In fact, recent Canstar research shows that 38% of lenders on its database have now increased at least one fixed rate in the past two months.

NAB and Macquarie hiked their four- and five-year fixed mortgage rates earlier in May, by 0.25% and 0.30% respectively for owner-occupier loans with principal and interest repayments.

ANZ is now the only ‘big four’ bank not to have increased its rates on fixed-rate loans.

Four-year fixed term rates across the big four banks are now all back above 2%, with NAB lifting its rate last week, following similar moves by Westpac and NAB earlier this year.

Only three lenders are now offering four-year rates below 2%, down from 25 at the start of the year, and they’re unlikely to stay at such levels for long, Sally Tindall, research director at RateCity.com.au told Domain.

Thirty-one lenders have now hiked at least one four-year fixed rate in the last two months.

“Banks are shutting the door on record low four and five-year rates. Three-year rates are likely to be next, potentially in the second half of this year,” she said.

Experts warned back in March that competitive fixed rates had probably reached their lowest point.

At the time, borrowers were warned that bank funding costs would rise after Australia’s $200 billion emergency Reserve Bank funding scheme, put in place to mitigate the impact of the coronavirus crisis, ends on 30th June this year.

That program, which enabled ‘cheap’ three-year funding to lenders to reduce their costs, also in turn reduced interest rates for borrowers.

The end of the program is expected to lift fixed mortgage rates from ultra low levels and also dampen soaring demand for housing.

Tindall said the recent rises were the “canary in the coal mine” for borrowers, showing banks had already started to factor in future  funding cost rises and interest rate hikes.

And the shift shows that owner-occupiers taking out new mortgages need to be wary that their costs would likely significantly increase in future.

Borrowers needed to make sure they would be comfortable with increased repayments in future, particularly those who are already stretching themselves thin trying to keep up with rapidly rising property prices.

At the same time, property investors need to remember they aren’t immune.

While their investment loans are not currently affected by the rate increases, they will move higher eventually.

Despite the rises, home buyers and investors haven’t slowed down their spending, with recent data showing that the property market is as hot as ever.

CoreLogic reported a preliminary clearance rate of 78.2% across 2,845 homes over the weekend as home buyers and property investors squared off at auctions across the country, maintaining a string of 15 weeks above 77 per cent.

By comparison, 2,905 homes were taken to auction the previous week, with a 79% clearance rate.

The results are far higher than data collected the same time last year which showed that a mere 612 homes were taken to auction across the combined capital cities. 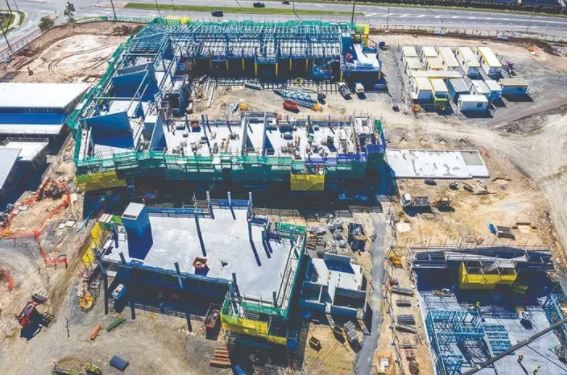 The Queensland government plans to establish a $1 billion housing investment fund according to its 2021-22 budget.

The fund is expected to generate $160 million in four years which will be used to “drive new supply to support current and future housing needs”.

The budget detailed further investment in social housing including $1.8 billion to increase the supply of social housing over four years with $30 million to be spent on fast-tracking these projects this year alone.

This funding along with hospital expansions, new schools in rapid growth areas, infrastructure and a hydrogen feasibility study were some of the key highlights in the state budget.

“It is no surprise that more Australians are flocking to Queensland,” Dick said.

“Our state received 30,000 net interstate migrants in 2020, and we are expecting another 85,000 Australians—the equivalent of a city the size of Rockhampton—to call Queensland home over the next four years. 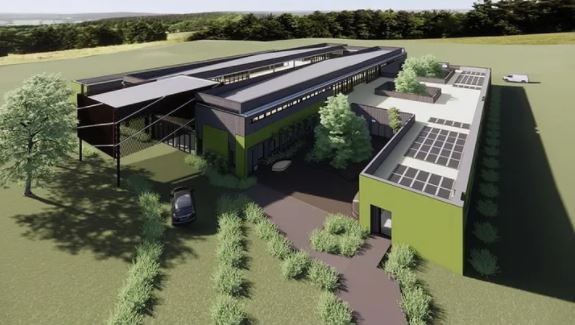 ▲ Planning is under way on the satellite hospitals which aim to free up capacity in acute hospitals and provide virtual health opportunities.

There would be $177 million spent in Springfield to create a new public hospital, while the Caboolture Hospital redevelopment would get $103.5 million, $92.4 million was allocated for expanding Ipswich Hospital and $90 million for Logan Hospital.

Infrastructure funding was also on the cards for Bruce Highway upgrades and $1.044bn to extend Gold Coast Light Rail to Burleigh as well as $1.5bn further funding for the Cross River Rail. 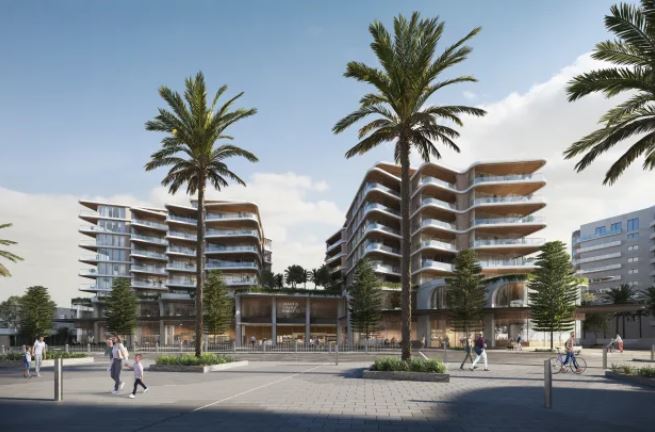 A joint venture with Alceon Group has supercharged the pipeline of Sydney developer Sammut Group, including a $350 million plan to transform the Cronulla CBD in the city’s southern beach suburbs.

The mixed-used urban renewal project, known as Vue, will cover more than 5000 square metres after Sammut Group was able to pull off a complex site aggregation that cost more than $100 million.

“In the past 15 years there’s probably been half a dozen developers try to put the site together through various schemes, but no one has been able to fully secure every single tenant and landlord there,” said Mr Sammut.

“It was quite a diverse range of negotiations and because they’ve been approached so many times, obviously expectations were always high. I would put it down to local knowledge and a one-on-one approach.

“Even though the negotiations were painful and quite trying at times we were finally able to get there.”

It is the third project Sammut Group and Alceon have partnered on – two in Cronulla and one on the Gold Coast – and a fourth is on the way.

Mr Sammut said the partnership had been a game changer for the business, founded by his father 50 year ago, which specialises in luxury apartment and mixed-used developments around the Cronulla area.

“We’ve formed a great bond with Alceon and probably have about $750 million worth of projects under way,” he said.

They are Vue, another nearby development called Parc, and the company’s first interstate project – Coast, a 35-level apartment building at Surfers Paradise in south-east Queensland.

All are in various stages of planning, while the final project with Alceon, back in Cronulla, is on the verge of being finalised.

Sammut Group now had the financial firepower and the ability to grow beyond its Cronulla roots into new markets, Mr Sammut said.

Its first foray outside NSW, the $200 million Coast project at 43 Garfield Terrace, Surfers Paradise, had been an immediate success.

More than 70 per cent of the 43 apartments have pre-commitments at prices of between $3.5 million and $9 million, even though development (DA) approval is still pending.

The sales were achieved in just three weeks, a reflection of the extremely strong Gold Coast apartment market.

In Cronulla, a development application has also been lodged for Vue, on The Kingsway next to Northies Hotel.

Vue includes 112 apartments, plus commercial and retail space featuring flagship launch tenant Harris Farm Markets, which will open its biggest store in Sydney on the site.

Looking forward, Mr Sammut said the company would target lifestyle destinations “anywhere along the eastern seaboard” that are in the sights of cashed-up downsizers. 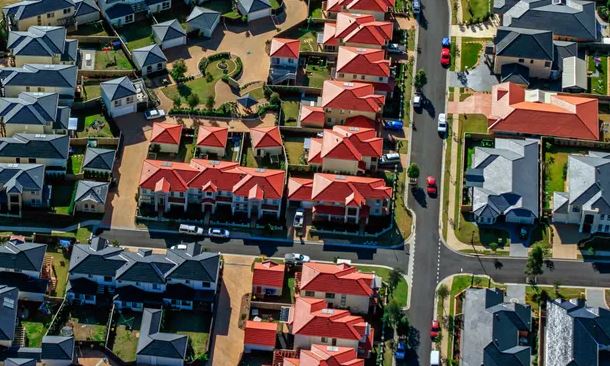 The reserve bank has continued to hold interest rates at a record low of 0.1% as house prices across Australia keep rising.

The national housing market rose 2.2% in May, according to the latest data from CoreLogic, following on from a 1.8% rise in April and a 32-year record rise in March of 2.8%.

In Sydney prices rose 3% in May alone, and prices are now up 9.5% in only the past three months (March-May).

Prices have reached record highs even though borders have been closed for more than a year and immigration halted, with the boom fuelled largely by Australian buyers with improved savings and low interest rates.

Tim Lawless, the research director of CoreLogic, said housing values were up “across every capital city over the month, with both house and unit values lifting across the board”.

He said soaring prices were due to “the combination of improving economic conditions and low interest rates”.

“At the same time, advertised supply remains well below average,” he said. “This imbalance between demand and supply is continuing to create urgency amongst buyers, contributing to the upwards pressure on housing prices.” 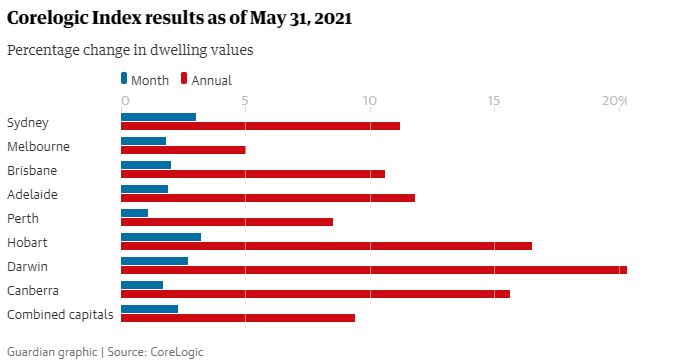 According to CoreLogic, the number of homes listed for sale nationally is 24% below the five-year average.

And even as supply picks up, continuing high demand means that sales still exceed supply.

“The sales-to-new listings ratio remains around 1.1, meaning for every new listing there is more than one sale occurring,” Lawless said. “This rapid rate of absorption is keeping advertised inventory levels extremely low, despite the rise in new listings. As a consequence, vendors remain in a strong selling position while buyers have a weak position at the negotiation table.”

“Such a synchronised upswing is an absolute rarity across Australia’s diverse array of housing markets,” Lawless said.

The CoreLogic report also found that “worsening affordability pressures are likely to impact first homebuyers more than other segments of the market” and “there are already signs that first homebuyer demand is pulling back”.

“Investors, on the other hand, are stepping up their activity across the housing market, motivated by prospects for continued capital gain and low interest rates,” CoreLogic said.

… we have a small favour to ask. Millions are turning to the Guardian for open, independent, quality news every day, and readers in 180 countries around the world now support us financially.

We believe everyone deserves access to information that’s grounded in science and truth, and analysis rooted in authority and integrity. That’s why we made a different choice: to keep our reporting open for all readers, regardless of where they live or what they can afford to pay. This means more people can be better informed, united, and inspired to take meaningful action.

In these perilous times, a truth-seeking global news organisation like the Guardian is essential. We have no shareholders or billionaire owner, meaning our journalism is free from commercial and political influence – this makes us different. When it’s never been more important, our independence allows us to fearlessly investigate, challenge and expose those in power.