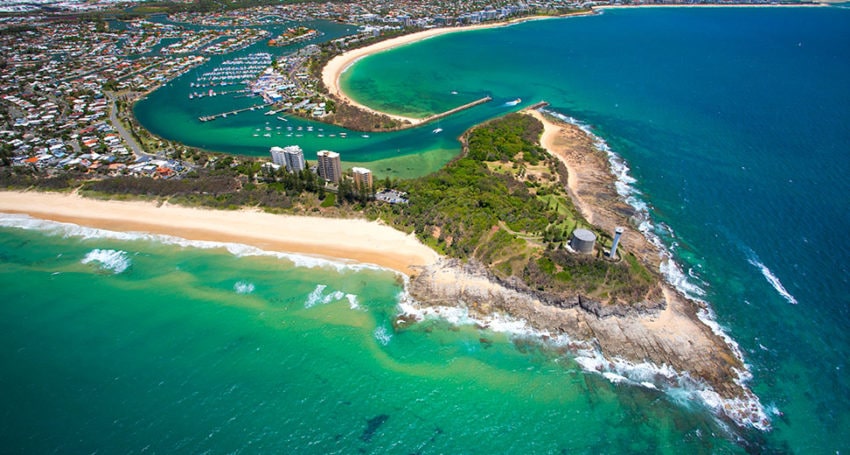 The future development of the rapidly growing Sunshine Coast is likely to swing back from building new greenfield estates to higher density apartment-style housing along major transport corridors after the Sunshine Coast Council decided to scrap its existing planning scheme.

The decision at today’s meeting of the council is likely to kick off a fresh round of debate about the region’s future, with some community groups vehemently opposed to accommodating future population growth with more and bigger apartment-style developments.

All but one member of the council voted to replace the planning scheme, adopted in 2014, in favour of a new document to be produced over the next three years. The new scheme will help shape the development of the region, which is expected to need 87,000 new homes to accommodate a population that will top 500,000 by 2041.

The council is under pressure from the State Government to have most of the new housing accommodated with the existing urban footprint rather than through opening up new areas for development.

However, tensions have arisen over continuing to approve new development without waiting for new infrastructure, particularly transport links.

In a report to council on adopting a new planning scheme, officers said it “will need to have an increased focus on urban consolidation (and in particular consolidation done well and at the right locations) as opposed to continued urban expansion”.

Sunshine Coast Mayor Mark Jamieson said the new scheme would need to respond to emerging issues such as implications of the COVID-19 pandemic, the predicted impacts of climate change and new technologies.

“A lot can change in 10 years, but one thing that remains constant is the importance of maintaining our region’s identity, character and lifestyle,” he said.

“Here on the Sunshine Coast, we’ve been experiencing growth for some decades now – it’s not something new.

The council voted to move to a new planning scheme after two hours of debate, with Maroochydore-based councillor Joe Natoli the only dissenter.

However, other councillors expressed concern about the capacity of the Sunshine Coast to carry every more rapid population growth. Others called for assurances that local residents were consulted on the new plan and educated about what it would mean for future development.

Natoli, whose division is likely to be the focus of much of the new “infill” residential development, also criticised the operation of the existing planning scheme, saying it was full of “compromises left, right and centre” in encouraging larger apartment developments in a “windfall for developers”.

He blasted the state government for imposing more density on the coast.

“We are letting them get away with it and it is time we take control. We should be saying to the State Government: “We’ll accept population growth, but on our terms not on your terms”.

Deputy Mayor and veteran councillor Rick Baberowski said the existing planning scheme had attracted 3000 submissions before it was finalised but he predicted that number would be “dwarfed” this time given the amount of community interest in the region’s future.

Jamieson said the council had to deal with both the legacy of previous planning decisions and its statutory obligations to adopt a fresh planning scheme.

He said the real beneficiaries of a good planning scheme would tend to be the younger families who have flocked to the Sunshine Coast in recent times, changing its demographic profile.

“In 2011, we had almost no development,” he said. “Young tradespeople who lived and worked on the Sunshine Coast had to leave, pack up and head to the mines.”

However, he said, it had taken just 10 years for incomes on the Sunshine Coast to go from 22 per cent below the state average to just eight per cent below and people were moving to the region to have an economic future as well as a lifestyle future. 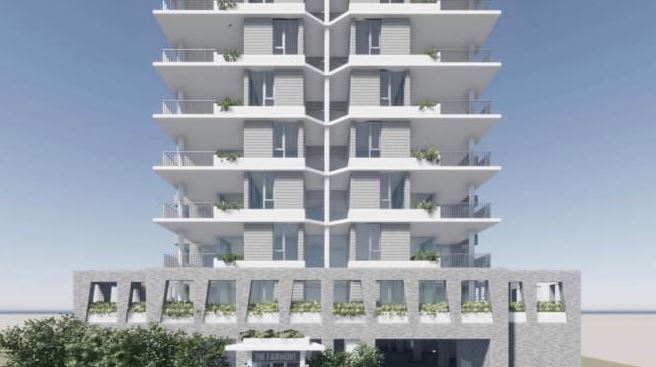 Brisbane’s Indooroopilly is set for a new boutique apartment tower.

A company associated with local developer and Verrecchio Property Group director Sandro Alberti has lodged plans to the Brisbane City Council for a 35 apartment block on Clarence Road.

Alberti paid $3 million for the 1,215 sqm block at 109-113 Clarence Road which had been marketed by Cushman & Wakefield as a boutique mixed-use development site which allows for up to eight storeys. 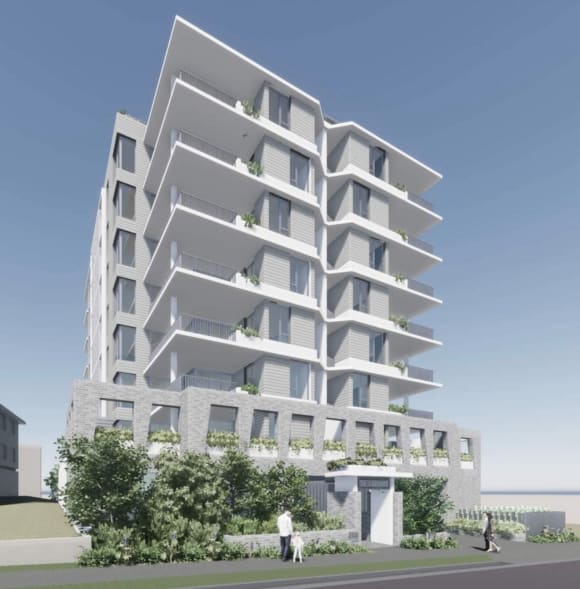 There’s already plans by Prospect Architecture for an eight level tower, not including the two basement levels of garaging. Crowning the development will be a communal rooftop with swimming pool.

The plans suggest the development will be called The Fairmont.

There will be three two bedroom apartments and two three bedroom units on each level. 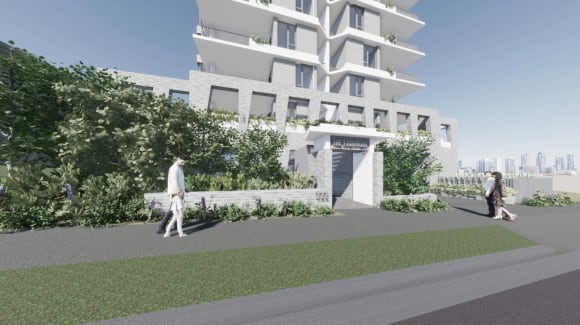 “Visually, the contemporary building design is consistent with the intent and character of the precinct.

“This includes a variety of materials and textures through brick cladding, rendered and painted blockwork, horizontal cladding, and metal battens assisting in the reduction of overall built form.

“The proposed landscaping and open space areas ensure the site is adequately vegetated, providing amenity for residents as well as adjoining neighbours and the relevant streetscape.” 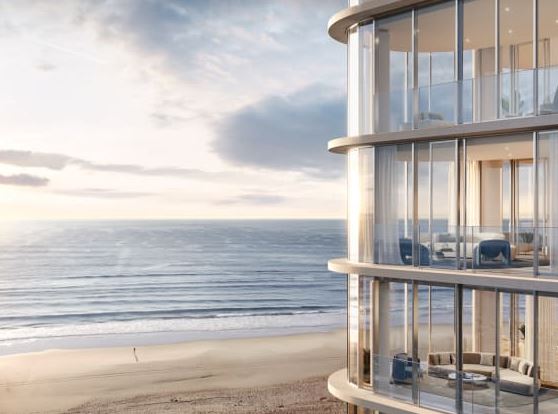 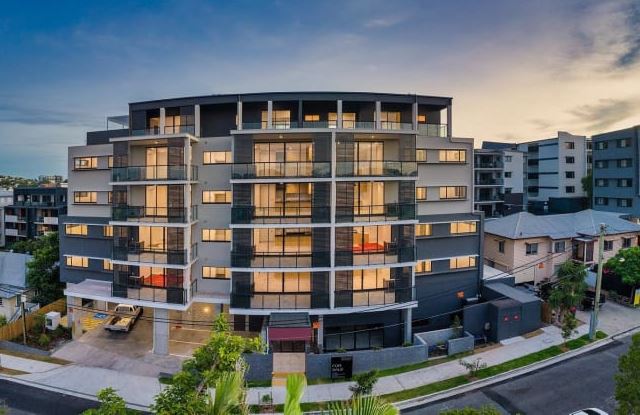 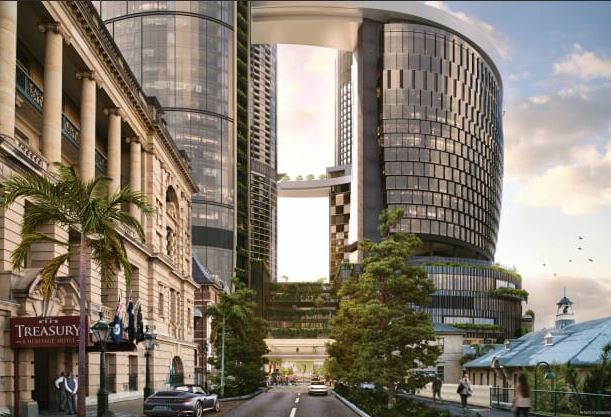 Top projects in Broadbeach on the Gold Coast 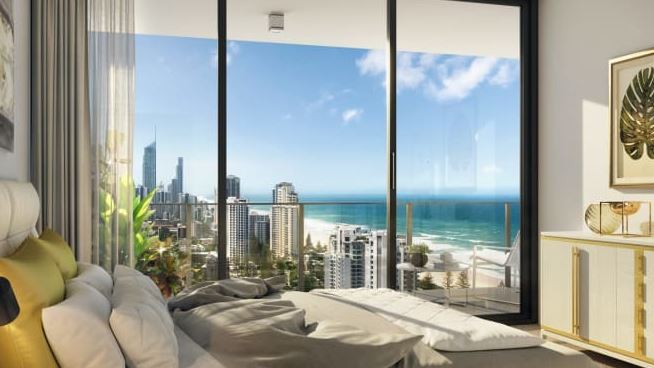 One of the fastest-growing cities in Australia, the Gold Coast has become a great location for investors and homebuyers.

Its residential market is booming thanks to its breezy lifestyle and relaxed atmosphere perfect for families and professionals.

Despite a decline in crane numbers over the last six months, the next six months is expected to see a flurry of sales as demand for apartments in the region continues to gather pace.

Broadbeach residents particularly have the best a suburb in Queensland has to offer, with a home in the laid-back beachside suburb that boasts all of the fun of the Gold Coast.

Many brand-new residences suitable for first home buyers, investors or downsizers offered at an affordable price point are available on the market now. 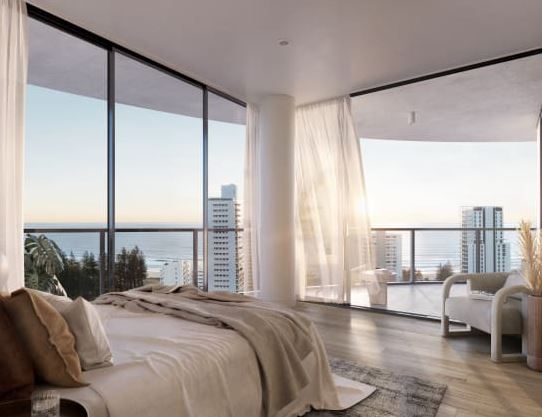 Delivered by family-developer Andrews Projects, Encore boasts a collection of 84 vibrant apartments footsteps from the ocean.

The two, three and four-bedroom apartments are designed by HHH Architects and feature oversized balconies with costal views. 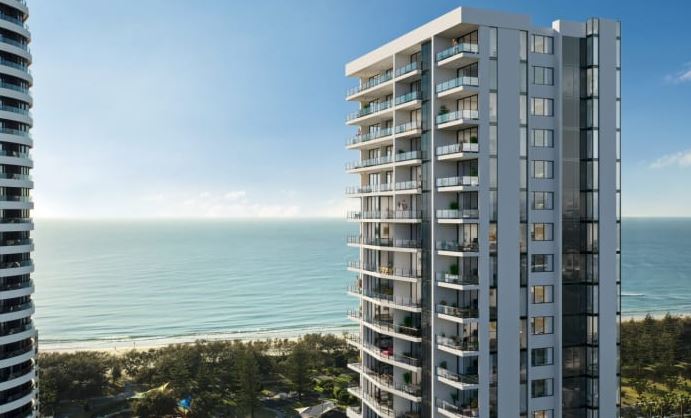 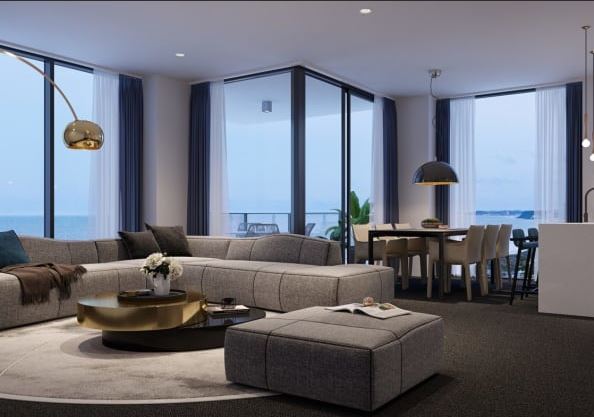 Located in the heart of Broadbeach, Opus provides a great value apartment for investors and owner-occupiers. 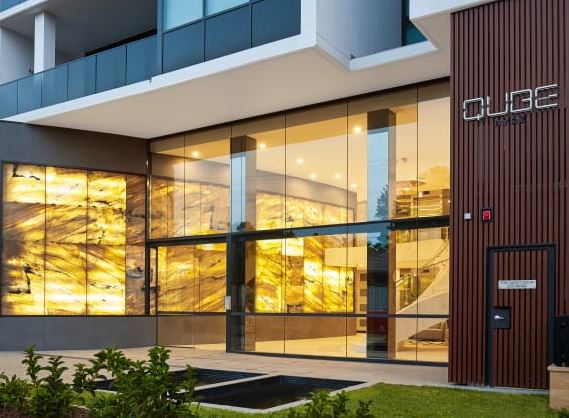 Yet another Morris Property Group development, Qube rises 40 levels and delivers 202 residences in one, two and three-bedroom configurations. Although, only three-bedroom apartments remain. 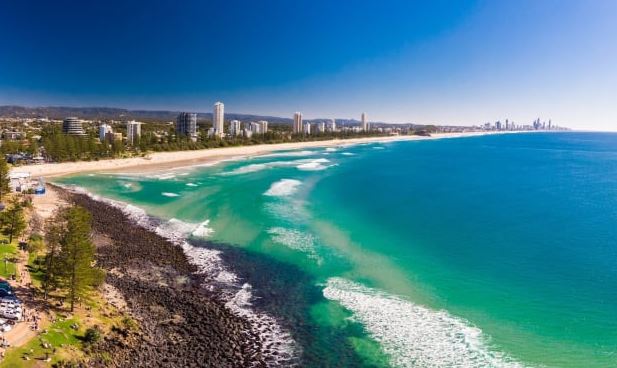 Plans have been lodged for Alba Residences, a $105 million apartment project at North Burleigh.

Developers can’t stay away from the booming Gold Coast market.

The longstanding Queenslander developer Devine Development Group is the latest to join the ever-growing index not wanting to miss out on the current Gold Coast apartment demand.

Set on the dress circle Esplanade facing the beach, the 21 level tower designed by Bureau Proberts will comprise half and full floor residences catering for the top end of the market, with prices starting from $2.25 million.

The Melbourne-based Mim Design are handling the interior. There will be a lifestyle podium for residents where there will be a swimming pool and a gym. 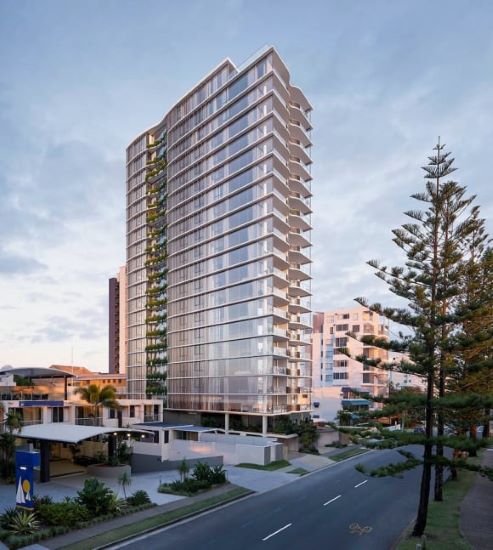 The facade of Alba Residences on Esplanade. Image supplied

It will sit on Esplanade, just down the road from 88 Burleigh, the $90 million tower by Allure Property Corporation.

The seashell-inspired, 17-level tower on The Esplanade, across from Burleigh Heads beach, will home just 31 apartments..

Demand for apartments in Burleigh Heads continues to soar as a surge of interstate buyers is creating a critical shortage of supply, particularly for three bedroom apartments which are being snapped up by downsizers.

Adam Young of Burleigh Heads’ Black and Young Real Estate, who has been selling real estate in the area for over three decades, says he has never seen the market in Burleigh so strong. 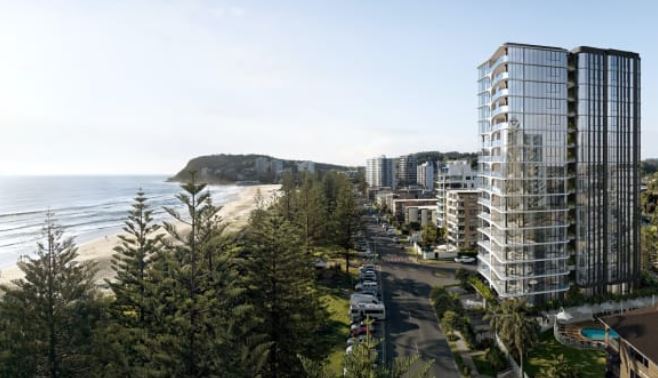 Burleigh is the ‘go to’ destination on the Gold Coast as a lifestyle, entertainment and dining precinct and real estate sales are reflecting the suburb’s newfound popularity.

“The market is very strong, driven by interstate migration and downsizers who see apartment living in Burleigh Heads as under-valued given its central location and the national park setting which is not unlike Noosa,” Young says.

Veteran developer and Devine Development Group head David Devine said Alba would be one of the enduring luxury apartment projects for Burleigh Heads and the timing to enter the market could not be better.

“We have worked for a long time to bring a project together that epitomises beachfront apartment living and Alba is the creation of that,” said Mr Devine.

“We believe is it a fantastic time to enter the market. Burleigh Heads is undoubtedly one of the most sought after residential locations for the luxury downsizer anywhere in Australia and there is certainly currently a shortage of new apartment product tailored to this market.

“Interstate migration to the Gold Coast is very strong as is the value that the Gold Coast offers compared so the southern states. The market is certainly leading the way nationally.”

JLE Projects director Jamie-Lee Edwards says Alba will be the epitome of beachfront living on what is a very tightly held and very high demand beachfront precinct.

“The convergence of sophisticated architectural design and interior styling with uninhibited views and the unparalleled location of Australia’s most recognisable beach, Alba is the pinnacle of contemporary beachfront living.”