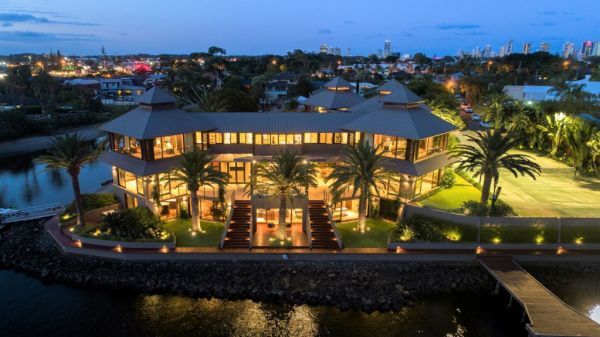 A Gold Coast mega-mansion with a private beach has sold for an eye-watering $11.75 million, blasting the city’s 2020 sales record out of the water and proving property pundits are still willing to splash big cash during the pandemic pandemonium.

Looking less like a home and more like a Thai resort catering to Hollywood royalty, the six-bedroom mansion Riverpoint, at 1-3 La Scala Court, occupies a gargantuan 2623-square-metre block on the glitter strip’s Isle of Capri, while featuring a cinema, seven bathrooms, tropical gardens and a tennis court.

The home was placed under contract by Amir Mian of Amir Prestige, and while co-selling agent Charlon Delos Angeles remained tight-lipped about the buyer, he said the incredibly short time on market was testament to the abode’s star-appeal. 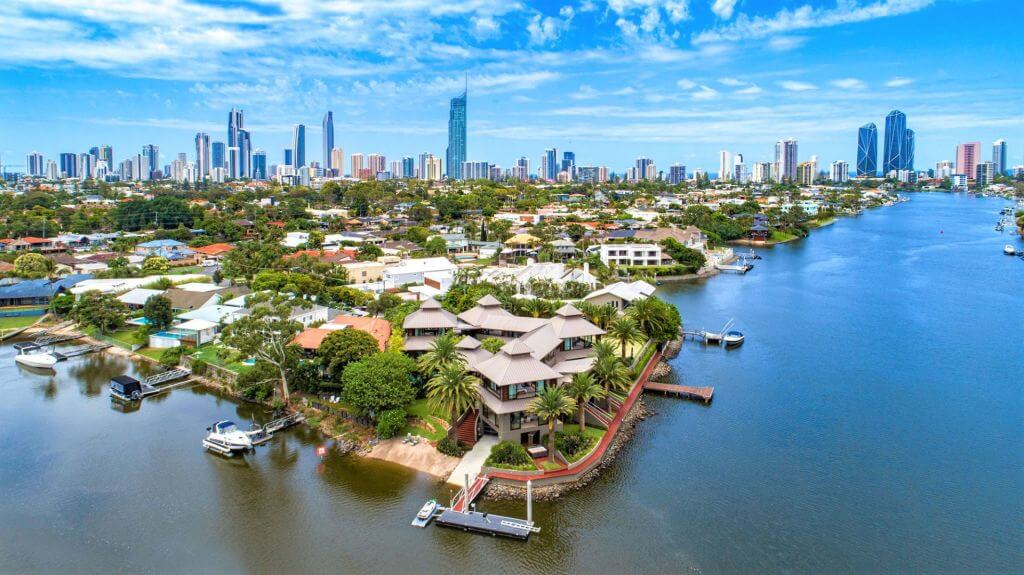 “It was launched just over three weeks ago … so when you’re looking at statistics on high-end properties, there’s only seven sales of this calibre a year and they normally just don’t sell this quickly,” Mr Delos Angeles said.

“We’re surprised it was such a speedy sale but not surprised because it’s such a unique style of home. It’s more of a resort and as beautifully photographed as it is, that’s nothing in comparison to a walk-through.

“There’s this beautiful running stream that feeds into the pool, and even just walking in you can hear it … As soon as you step through those doors, it’s like the overflow of feelings you get all at once. You’re in the middle of suburbia – you’re in Isle of Capri – and then you step into something that should be Thailand.” 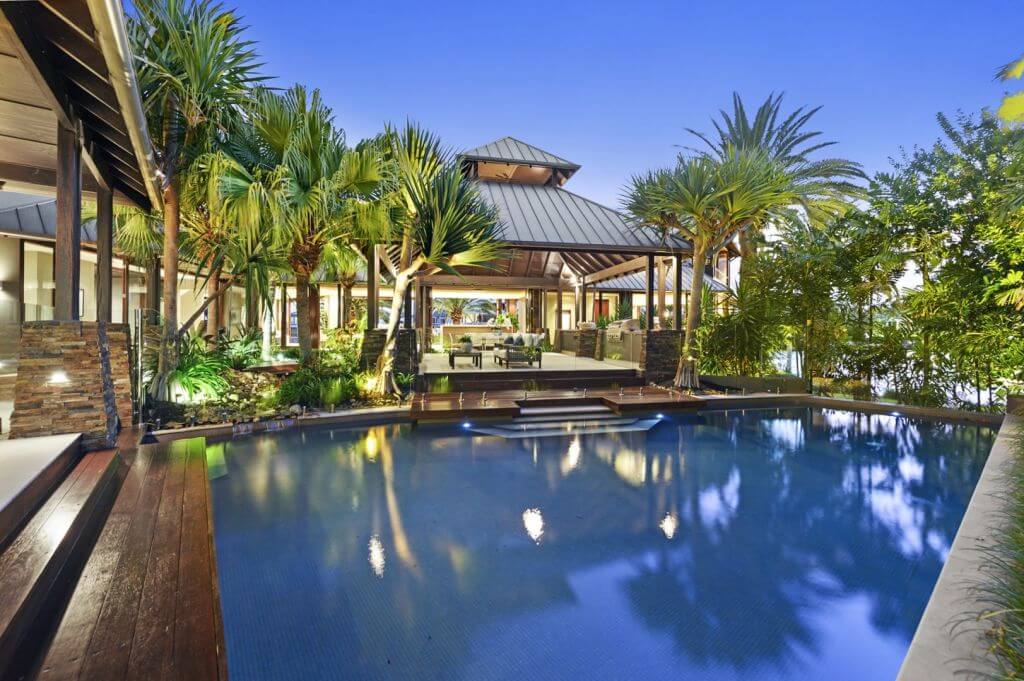 Mr Delos Angeles said everything about the magnificent mansion oozed getaway vibes – from the wellness centre with space for a private masseuse to the countless outdoor entertainment areas that lapped up pristine views.

While that luxury X-factor attracted global buyer interest, he said the city’s prestige market was continuing to enjoy international attention and barely paused for breath during the pandemic.

“We have had increased inquiry and people are starting to look at the Gold Coast as a safe area … and I’m sure that Australia is a really good investment right now because of the dollar,” Mr Delos Angeles said.

He felt the sheer opulence on offer in prime waterfront hotspots was a major pull for the city, and said they were nothing short of thrilled to have clocked such a high ticket sale in such a challenging time. 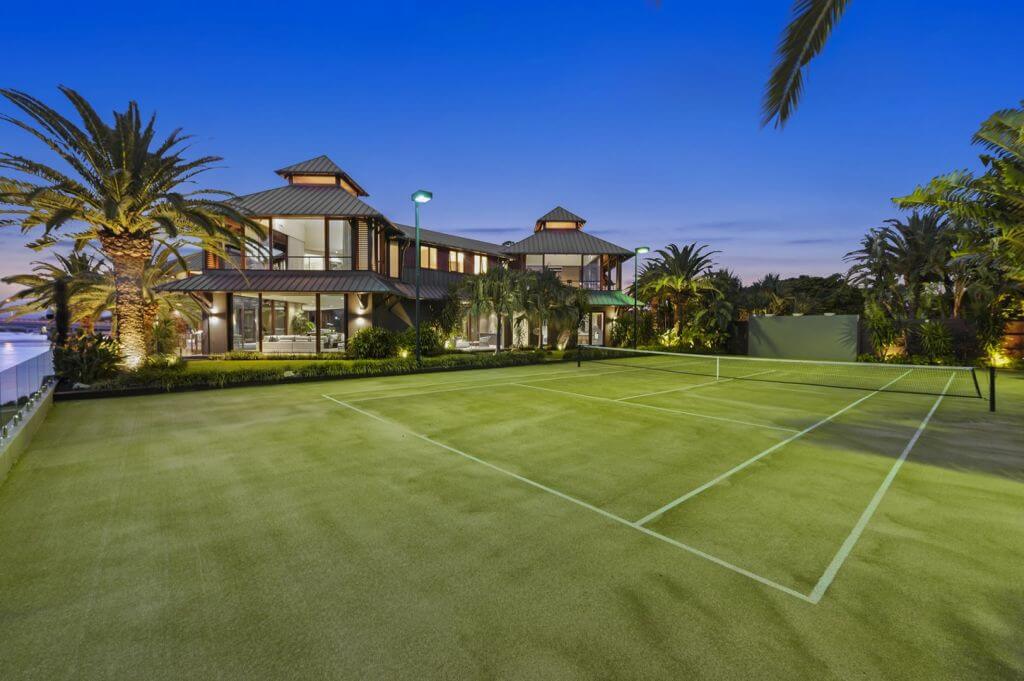 While Riverpoint may be far from the Gold Coast’s overall price record of $27 million (achieved in 2008 at Mermaid Beach), it remains the stuff stay-cation dreams are made of.

To add to the Oprah-level extravagance, there’s also a private beach, a pontoon, a 10-car basement garage and a boat ramp. 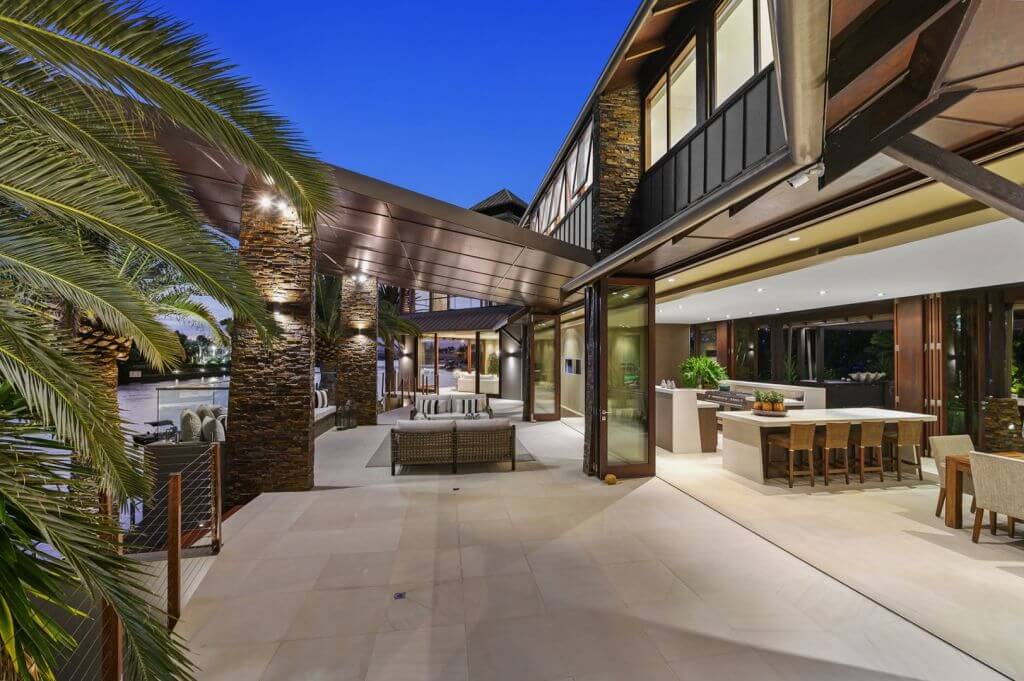 Prior to Riverpoint, the top sale for 2020 on the Gold Coast was a $6.75 million Paradise Point home that was snapped up earlier this year. 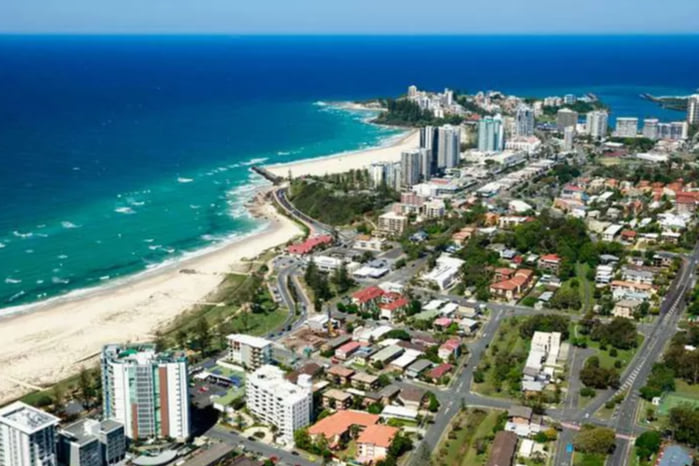 Plans for a 72-apartment residential development spanning 13-storeys in Coolangatta has been lodged with the Gold Coast council.

Gold Coast local Adam Lacey, director of development company Lacey Group, is attached to the applicant name, LGOC Nikkiville, on planning documents lodged with council, and has entered into a put and call option on the Coolangatta sites with the involved landowners.

The town planning assessment report, prepared by Urbis, says the developer is pushing for a 50 per cent height increase for its apartment project, with the current building height code at 29 metres. 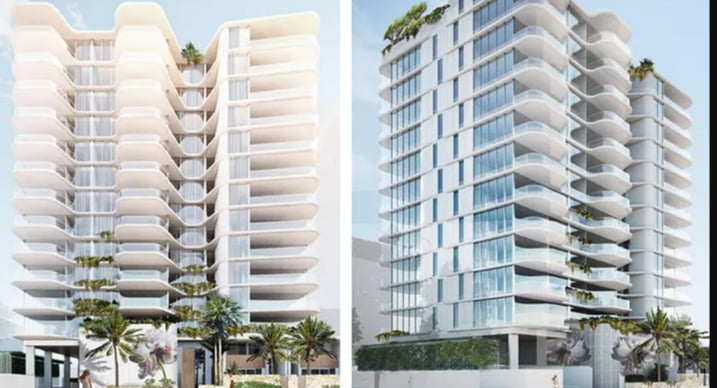 Plans show the Plus Architecture-designed project will incorporate “urban wall art” that will stand five metres in height.

According to the architect’s design response, “urban art has been found to be very successful in creating identity” noting that local artists are to be selected to create the piece.

The 9-11 Miles Street site had hit the market earlier this year in March.

Real Specialists Commercial agent Brad Duncalfe says the southern Gold Coast precinct—stretching from Burleigh Heads through to Coolangatta—has been an active market throughout the pandemic.

“It’s been extremely popular, with enquiries from southern buyers and developers. For developers in that mid-density range stock, they are still able to secure pre-sales.” 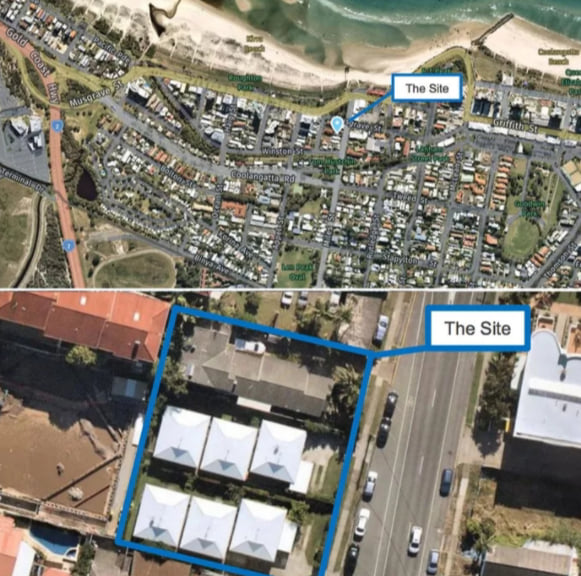 The Gold Coast-based Lacey group is behind a range of projects in the area, including a six-storey development comprising 20 apartments at North Kirra, and a 33-dwelling estate at Currumbin Waters.

Lacey is also the son of surf lifesaving champ, Peter Lacey, who was also a well-known property developer.

Recent approvals in the area include The Kirra Beach Hotel, by KTQ Development, which will comprise three towers of a maximum 15-storeys in height. 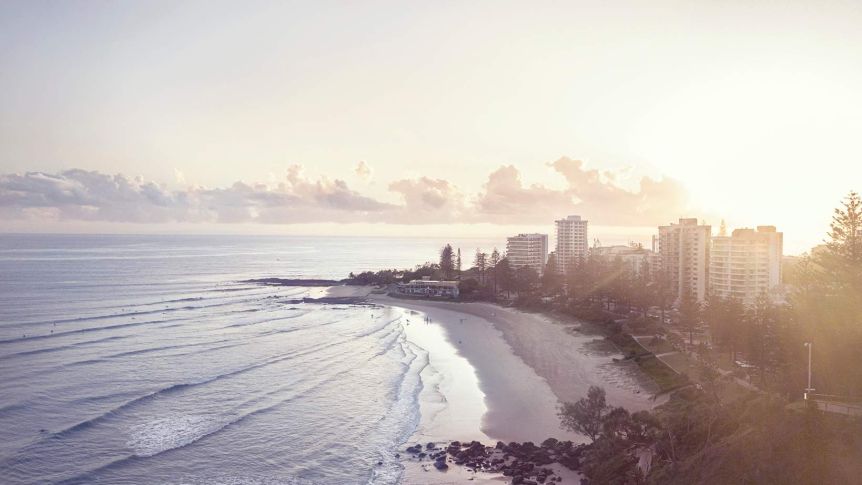 The approval of a luxury residential development in Rainbow Bay that generated $70 million worth of sales in just two months, should have faced greater scrutiny from council’s planning committee, according to councillor Gail O’Neill.

The 12-storey Flow Residences sold 80 per cent of its 22 apartments within 24 hours, with prices ranging from $1.17 million, for a two-bedroom apartment, to $10.6 million for the penthouse.

Director of KM Sales and Marketing Jayde Pezet, who handled the Flow Residences, said he was “extremely optimistic” about the potential for more high-end developments along the “trendy but sophisticated” southern Gold Coast.

“It’s the Gold Coast’s time to shine and everything is adding up,” he said.

But Councillor O’Neill said the project’s impact on view corridors should have been discussed in council’s planning committee.

The code assessable application was approved on Monday via a special delegation of chair of the city planning committee Councillor Cameron Caldwell, CEO Dale Dickson, and Mayor Tom Tate. 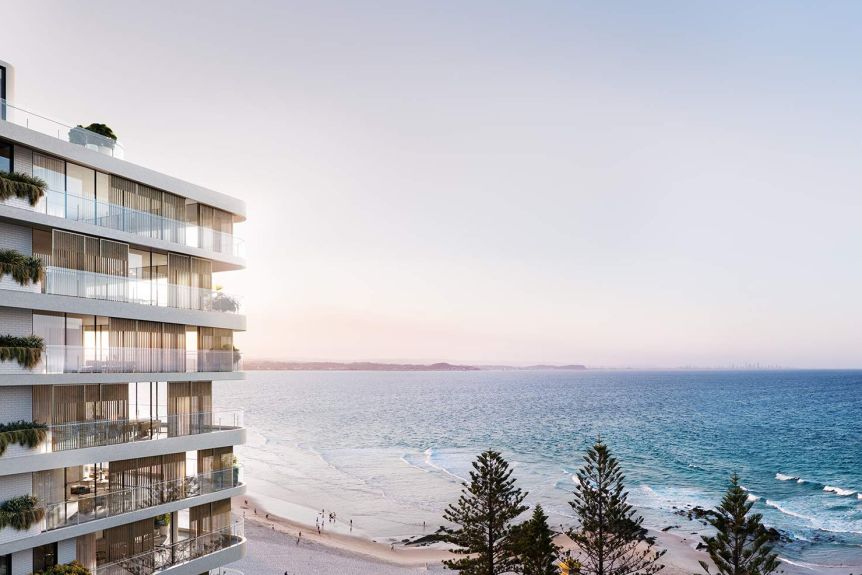 Code assessable applications are not required to be voted on by councillors.

But Councillor O’Neill said the loss of views for nearby residents and possible disruptions to traffic safety meant Flow should have been at least discussed by councillors in the planning committee.

“[It’s] the chance for anybody living in that area, especially if they’ve got concerns about safety, it gives them a voice,” she said.

“Just to see if we could get any changes to make it a little bit more palatable for them.”

Councillor O’Neill said while “the proper processes have been followed” it highlighted the need for changes to the city plan.

‘Something the Gold Coast hasn’t seen before’ 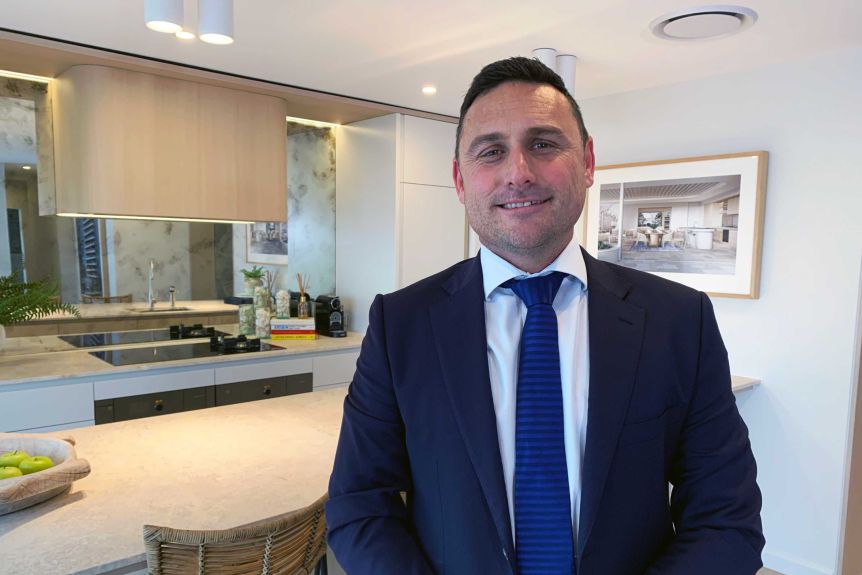 “Rainbow Bay, as such, is a north-facing beach, very much the same as Byron Bay and Noosa and if we look at properties there, they’re so tightly held and have expensive square metre rates,” he said.

Complete with wine and surfboard lockers, Mr Pezet said the development was “something the Gold Coast hasn’t seen before” with “major interest” from Brisbane-based and interstate buyers for properties in the $3 million-plus range.

“The Gold Coast has always had a little bit of a stigma about it with people from interstate but that’s certainly not the case at this point,” he said. 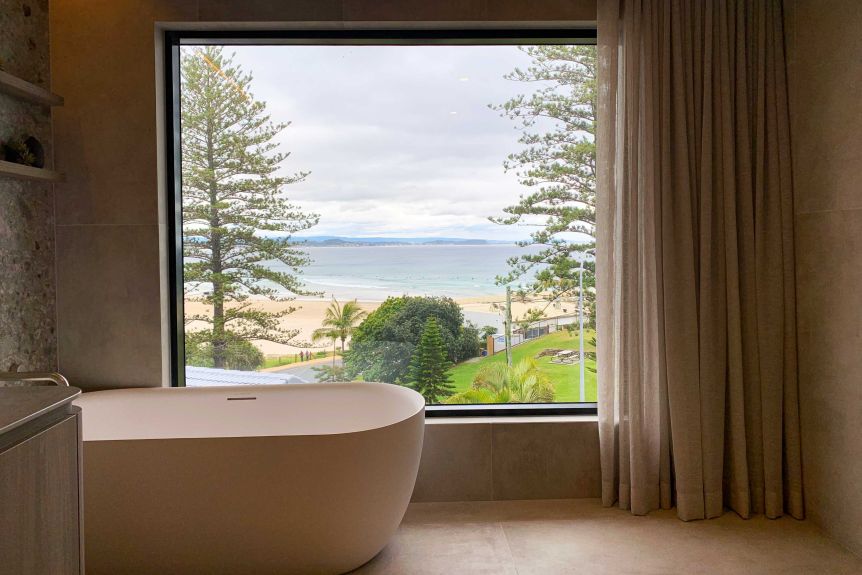 “Eateries that have now come to town, and a lot of interstate operators — that just adds to the appeal.

“We’ve always had the beautiful beaches but now we’ve got that real urban side of things, the real gentrification that’s occurring along the southern Gold Coast.”

The development, from S&S Projects, is due to be completed by early 2022, supporting around 1,000 construction jobs. 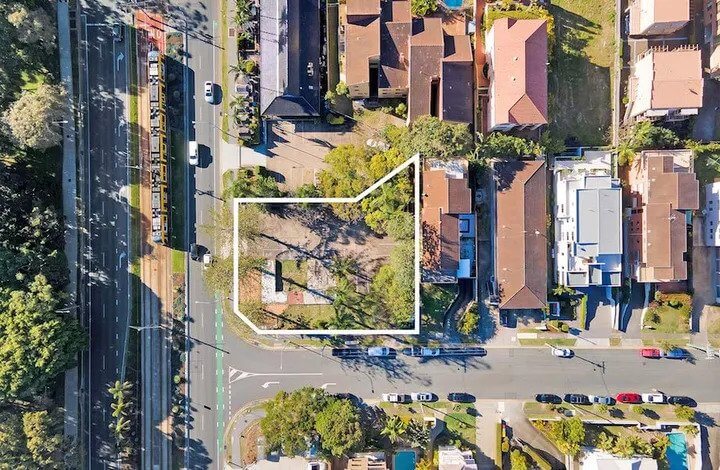 Located on the corner of Rosewood Avenue and Gold Coast Highway, Broadbeach the site is zoned for apartments in a prime corner location only metres from the beach and opposite the picturesque riverside park, Cascade Gardens.

Zoned high-density residential, the site offers a development-friendly envelope of 1235sq m, along with two street frontages on a corner position.

Situated between Surfers Paradise and the heart of the Gold Coast, GV Property Group’s Antonio Mercuri said an abundance of view corridors are on offer—ocean, coastline, skyline, and hinterland.

“And in terms of lifestyle potential, the Broadbeach locale is surrounded by the Star Casino, the convention centre, the recently-refurbished Pacific Fair shopping centre, Oracle Boulevard and the popular Oasis shopping and dining precincts—all within a short distance.”

Making for easy transport along the coastline and soon further south down to Burleigh Heads, G-link light rail stations are located within 500m of the site.

The site has current development approval for a 39-level high-rise with 186 apartments, including restaurant and retail space, and has approval for podium levels of above ground parking. Further details on the approval will be provided on request.

The planning framework supports the establishment of a both residential apartments and short-term accommodation, with scope for a mixed-use development, subject to council approval. 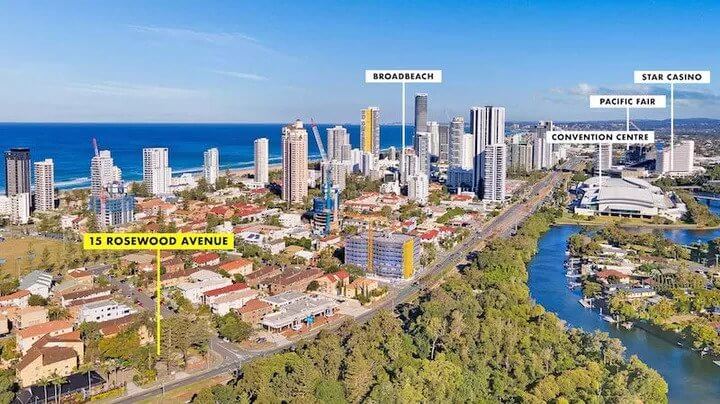 Under construction with cranes in the sky are two nearby Broadbeach sites successfully marketed by GV Property Group: The Gallery by Raptis Group in Second Avenue, and Encore by Andrews Projects in Britannia Avenue, both of which also performed well with off-the-plan sales.

15 Rosewood Avenue is being sold via an expressions of interest campaign, closing 29 September 2020. Please contact Antonio Mercuri on 0434 629 521 or email antonio@gvpropertygroup.com.