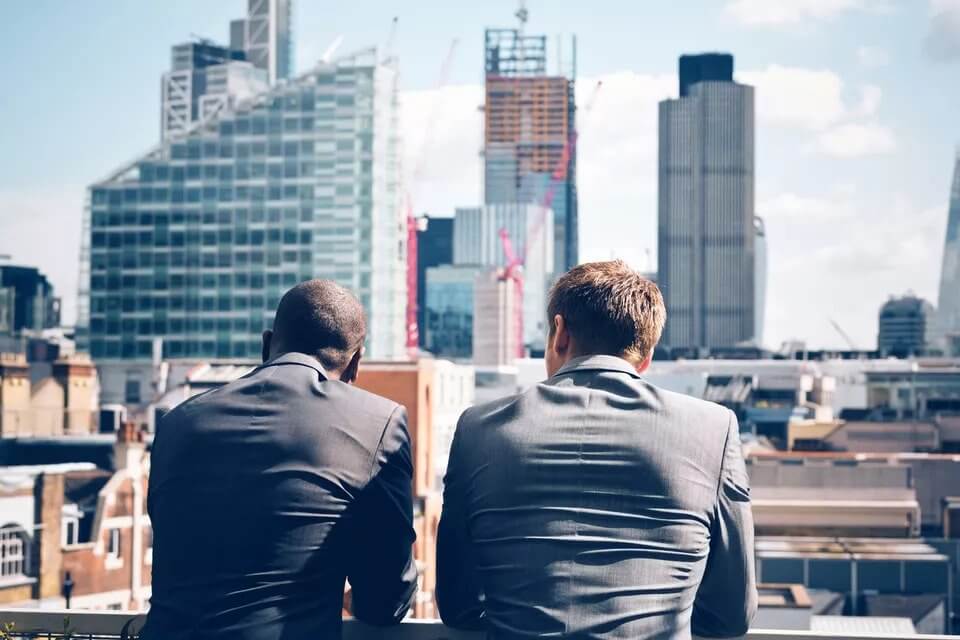 Three factors that delivered much-needed oxygen into the market were the easing of various APRA regulations, a surprise election result favouring the industry and a residential property market that appeared to be turning around.

In Australia, the bushfire crisis has undoubtedly been a tough curtain-raiser to open the new decade but there are still signs of optimism in the residential property market, one of the most notable being new buyers (including first home purchasers) welcomed back into the market.

As we look ahead to what the remainder of the year has in store, Development Finance Partners director Matthew Royal gave us his top five predictions for 2020.

What developers should do

Developers undertaking projects funded at competitive interest rates, close to new planned infrastructure and growth areas, and provide stock in the more affordable end of the market will be well-positioned to start the new decade strongly.

Contact Development Finance Partners to discuss how DFP can help you turn your plans into reality or follow them on LinkedIn to stay up-to-date on the latest property market news and innovative property development financing models.

The COVID-19 pandemic has put a plan to direct billions of dollars towards south-east Queensland projects over the next 20 years on hold.

The plan would commit local, state and federal governments to fund specific areas to cater to a population that will grow by 1.9 million people in the next two decades.

The Property Council of Queensland and the Committee for Brisbane described the delay to 2021 as “a cruel blow” for south-east Queensland, where citizens “deserved better”.

“To be fair, we would have expected a few months’ delay on the basis that COVID-19 has had an impact, but to simply kick the can into next year seems too much of a delay,” Mr Mountford said.

He said other states were doing a better job of locking in private-sector investment as part of their economic recovery plans.

“Queensland is really slow out of the gate on this front. We are not seeing much of the critical role that private investment will need to play in that,” he said.

“I think if they were still negotiating the Western Sydney City Deal, I am fairly confident the NSW government would not be tolerating a pause.

“They would more likely be saying, ‘we want the investment faster because we want that investment sooner’.”

“We were the only state to record a decline in our unemployment rate last month, and recent transaction data from the Commonwealth Bank shows Queensland private-sector spending has recovered faster and higher than any other state.”

“The reality is that the SEQ City Deal would do nothing to improve these numbers in the COVID environment because it’s about projects that only deliver years away,” Mr Dick said.

“This includes things like the 2032 Olympics, a process which is currently on hold given the IOC has delayed the 2020 Olympics.”

Cities Minister Alan Tudge signed a statement of intent in Brisbane on March 15, 2019, with Queensland’s then-treasurer, Jackie Trad, and former Brisbane lord mayor Graham Quirk, who was chair of the South East Queensland Council of Mayors at the time. 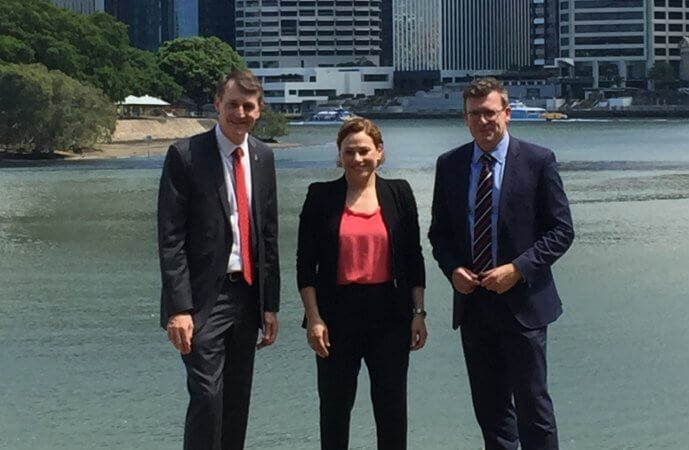 The formal South-East Queensland City Deal was expected to be signed in mid-2020, before the COVID-19 pandemic struck.

However, a decision to delay planning was agreed by all three levels of government, according to a joint statement released on Tuesday.

“The Australian Government, Queensland Government and Council of Mayors (SEQ) have agreed to extend the negotiation of the SEQ City Deal into 2021 while we focus on recovery from the COVID-19 pandemic,” the statement reads.

“As governments focus on the COVID-19 impacts it will be important to assess new priorities in the context of the recovery at a later date.

“This will ensure all levels of government have greater clarity of the impacts on the SEQ region and that new and emerging priorities are considered to ensure we have a solid foundation for our future SEQ vision.”

Mr Mountford said the effect of the coronavirus pandemic on the state’s economy “should provide added impetus to a City Deal, now”.

He and Committee for Brisbane chief executive Barton Green said in a joint statement an SEQ City Deal should be the centrepiece of recovery.

“The decision to postpone all the hard work done to date is confusing and disappointing.”

The statement from the Property Council of Queensland and Committee for Brisbane asked governments to reconsider this decision.

“Deliver on the promises made to south-east Queensland residents to fund and prioritise City Deal projects that will support our growth and our economy.” 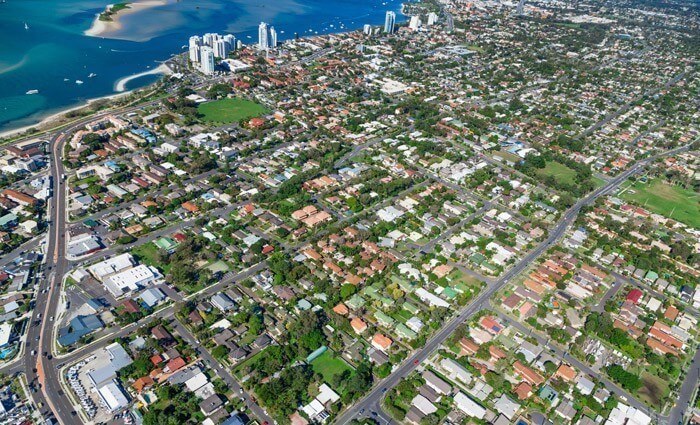 The key message for property investors right now is that there are many growth markets across Australia.

There’s a tendency in mainstream media to extrapolate the situations in Sydney and Melbourne to the whole nation. If the big cities are in decline, then Australian real estate is in decline, according to news media.

This is seldom true – and it’s certainly not the case right now. Some of our smaller capital cities are pumping strongly and, in particular, regional Australia has many growth markets.

Last week I made this comment: “Regional Queensland has achieved something that few jurisdictions across Australia have managed: it has maintained its previous high levels of well-performing markets in defiance of Covid-19.”

I wrote that I rated the Sunshine Coast one of the strongest economic and real estate stories in the nation and that it continues to produce solid results in its property markets.

The anecdotal evidence from people at the coalface of the Sunshine Coast property industry is that sales are happening, vacancies remain low and there’s no evidence of values falling.

The latest data on prices and vacancy rates confirms that – with evidence of notable growth pockets.

Most of the postcodes across the Sunshine Coast region, including Noosa (which is a separate local government area), have vacancy rates between 1% and 2%. While some of the capital city CBDs and tourism-dominated locations like Surfers Paradise have had big blowouts in their vacancies, the Sunshine Coast has resisted this trend.

Although tourism is an important industry to the Sunshine Coast, its economy is insulated by the ongoing massive spend on infrastructure, including the evolving medical precinct, the new CBD now under construction, the billion-dollar highway improvements, the upgrade of the local airport to international status and the subsea internet cable link to Asia – among other projects.

And this is bolstering the local property market.

The top end of the market in particular has been boosted, thanks in part of the influx of well-paid medical specialists working in the new medical precinct, based around the $2 billion university hospital.

The two most expensive suburbs in the region, Sunshine Beach and Minyama, have both experienced notable uplift in prices recently. The median house price for Sunshine Beach, just outside Noosa, has risen 16% in the latest quarter and 27% in annual terms, to reach $1.8 million. Minyama is up 7% in the most recent quarter and 23% annually – and typical houses are now above $1.1 million.

The median house price for Noosa Heads has risen 8% in the past year, including 1.4% in the most recent quarter.

Other locations throughout the Sunshine Coast region, including Mooloolaba, Maroochydore, Coolum and Pelican Waters, have recorded more moderate growth, but nevertheless have achieved price uplift in both the past 12 months and the most recent quarter – and a time when the big cities are feeling the negative impacts of Covid-19.

Keep that in mind the next time you hear one of our chattering economists telling us that “Australian property prices” are falling.

The Sunshine Coast is a standout example among many thriving regional markets. 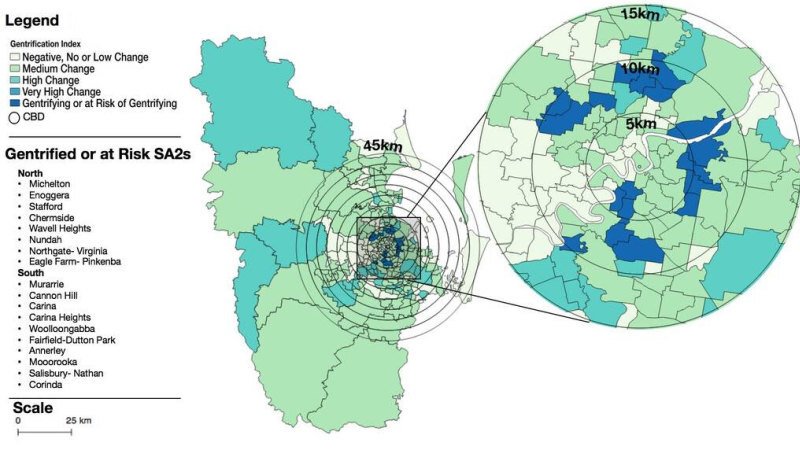 Gentrification has moved from the CBD to the suburbs of Australia’s three largest cities, in a trend researchers say shows the country’s housing system is “broken”.

A University of Queensland team mapped urban renewal and population demographics from 2006 to 2016 to see how the process had spread through Brisbane, Sydney and Melbourne.

Broadly, gentrification is the process of wealthier people moving into previously poorer areas, pushing out people who already live there as the price of rent, housing and other cost-of-living measures rises.

UQ urban planning expert Dr Dorina Pojani, one of the authors of the research, said the data showed gentrification stabilised in the CBDs some years ago, with suburbs as far as 15 kilometres from the city centre now going through the process.

“This was quite surprising to us, because the conventional wisdom is that you get high levels of gentrification in the centre of cities and less the further out you go,” Dr Pojani said.

“Instead we found the inner cities are actually pretty stable. They’ve seen a little bit of change but not nearly enough to call it gentrification.” 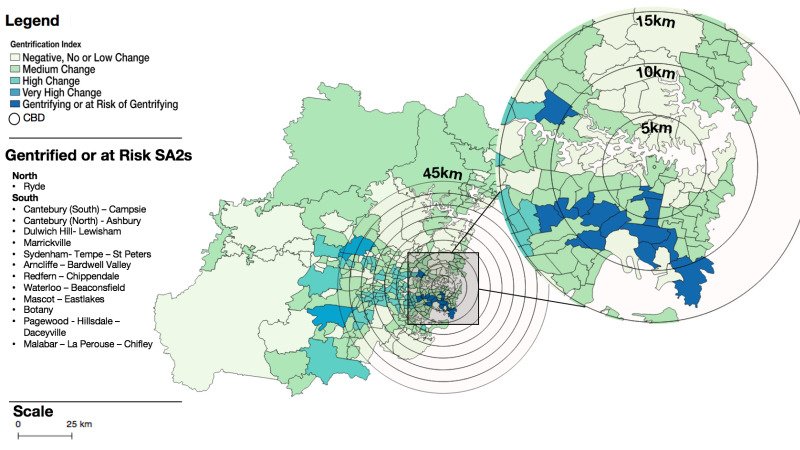 In particular a ring of suburbs from about five kilometres to 15 kilometres outside the CBD seemed to be either fully gentrified or rapidly gentrifying.

Dr Pojani said the phenomenon was relatively uniform across all three cities and showed what she believed to be the result of Australia’s focus on housing as investment and not necessity.

“The fact that there is any gentrification is an indication of a broken housing system,” she said.

“We need to fix the housing system so this phenomenon is removed from geography and urban planning. 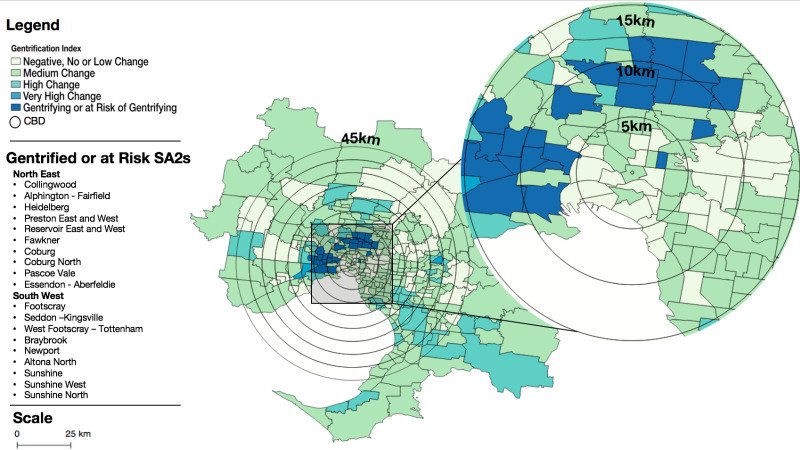 “We need to instil in our policy makers the concept that a house is a place for living. It’s not a place to store or showcase wealth.”

She said viewed through that lens, resistance to gentrification in the inner ring of the three major capitals suggested more of a drive to preserve the “character” of suburbs for wealthier residents, rather than a concern for poorer residents.

“Some of it is pure NIMBYism, people who don’t want new development no matter what, they want to keep their property prices high and one of the ways to do that is keep supply low,” Dr Pojani said.

“Gentrification has moved out from the CBDs steadily, so there might be people who want to live closer in but they just can’t afford it.”

She and the other researchers suggested stronger planning approvals across the country, rather than trying to “patch” gentrifying pockets on an ad hoc basis.

In Brisbane, suburbs such as Fairfield, Moorooka, and Sunnybank, which have had historically high immigrant populations, are now seeing more affluent groups move in, while Wooloongabba is seeing rapid change due to its proximity to the CBD.

While Brisbane has an almost perfect ring of suburbs rapidly gentrifying, Sydney’s gentrifying suburbs are mostly in a large southern strip, the research found, while the northern suburb of Ryde had been the target of infill development policies.

Melbourne has two main gentrification clusters located five-to-15 kilometres to the north and west of the CBD, typified by suburbs such as Footscray and Sunshine. Much like in Brisbane, the historically migrant populations of those areas are being replaced by more affluent residents.

This data was sourced from the Australian Census as well as local council data and Google Maps.

The research has been published in the journal Australian Planner.