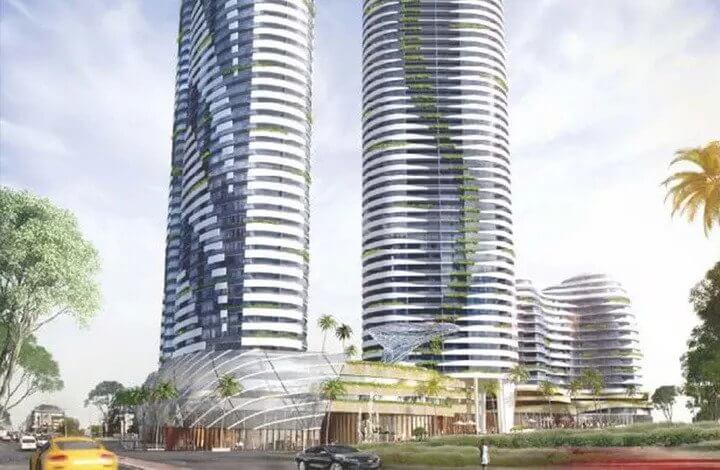 Only one submission was made against the proposal relating to traffic impacts for access to a neighbouring property.

Council officers also noted traffic concerns for the area with infrastructure updates and sewerage improvements earmarked for site which sits within the Southport Priority Development Area.

Council said they would provide $4.9 million toward the upgrade of the sewerage system however the final estimated infrastructure charge for the development is expected to cost $26.86 million.

The developers previously planned 1,500 dwellings on the site across five towers however this was changed after pre-lodgement meetings with council officers.

Aland also has plans for 366 apartment tower at 16 Parkes Street, Parramatta which they purchased from Singapore-listed CWG International for $40 million in late 2017.

They also own Peak Towers which was located next door to the plagued Mascot Towers.

The Southport development would occur over four stages starting with the shortest tower at 18-storeys and a podium.

Stage two will include a 50-storey tower, basement carpark and the rest of commercial space before the final stage commenced with the construction of a 62-storey and 71-storey tower.

The project involves the $175 million connection and refurbishment of the former Health and Forestry Buildings located at 155 Charlotte Street and 150 Mary Street—acquired in 2017 for $66 million—into a cross-block hub comprising a commercial tower, with a public laneway connecting both streets.

Rather than using the conventional method of joining the existing 20-storey buildings by a skybridge, the buildings have been merged from top to bottom using a base podium and exterior, to provide large campus-style 2,500sq m floor plates.

The infill is locked in by a new level 20 slab supporting an additional six levels above, to form the single 26-storey tower currently being constructed by Hutchinson Builders—who, like other “essential services” have continued work while adapting to Covid-19 social distancing measures.

“Through good design, we have given new life to the buildings in a somewhat unconventional but highly innovative and technically considered manner.

“We’re leading the way for more environmentally-friendly adaptive reuse while meeting commercial objectives in creating large floorplates that would otherwise be unattainable in this CBD location,” Curzon said.

Compared with a demolish and rebuild scenario, Midtown Centre’s infill achieves a claimed 231 per cent cumulative impact reduction across all environmental indicators, including a 37 per cent carbon dioxide reduction compared to a new build.

Curzon said that although the successful merging of the structures in the Midtown development rests partly on the fact that the two buildings’ original designs mirror each other, the technique was transferable.

“The infill has afforded significant environmental savings, adding to the viability of this technique and its potential to be implemented across other buildings that sit side-by-side.”

“Despite nothing of this scale or nature taking place in Australia previously, we have found a way to add value to the site through a cutting-edge architectural process that is exemplar for Brisbane and beyond.

“Our work at Midtown Centre is focused on bringing the buildings in line with today’s needs, increasing net lettable area and producing environmental sustainability through the design of commercial assets,” Mills said.

Even before coronavirus created the new normal of social distancing, which in turn is set to have transformative impact on office design—Ashe Morgan chairman Michael Moss predicted the “customised office solution” prescribed for Rio Tinto would “create a benchmark for workplaces of the future”.

The centre features a level 20 “sky garden”, landscaped garden terrace atop the podium and “green seam” encasing the tower along with landscaped areas across the development totalling in excess of 3,000sq m.

With the Midtown centre slated for completion in mid-2020, the next phase of construction involves the addition of six levels to create a single tower from the new level 20 slab. 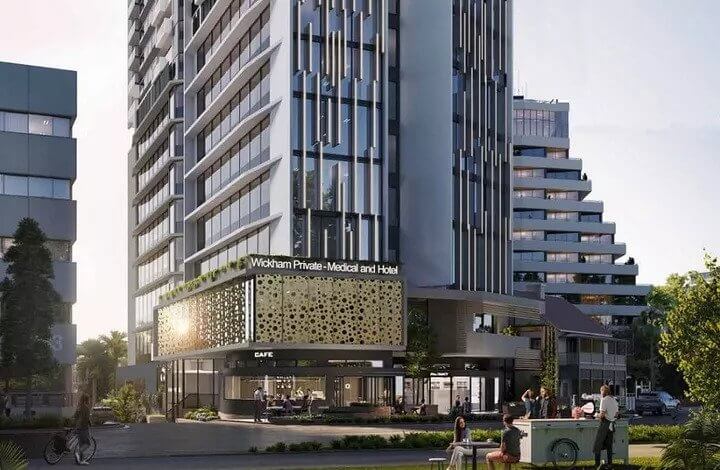 It was the second medical facility application lodged in the Brisbane CBD fringe suburb after Silverstone Developments revealed plans for a nine-storey commercial and medical building last week.

It includes 5,307sq m of health care floorspace, 186sq m of retail, a hotel with 46 rooms, conference rooms, a business lounge and a rooftop communal area.

The 1,370sq m site opposite Roma Street Parklands was in the midst of a community and residential precinct including multiple medical facilities as well as St Joseph’s College, Brisbane Central State School and Brisbane Grammar School. 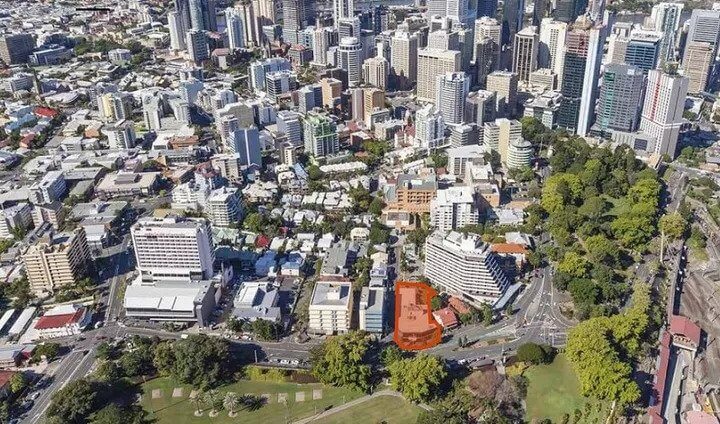 The decision to lodge the plans was spurred on by Covid-19 according to the development application by Barber Property Group under the guise of St Lucia Enterprises.

“The current public health situation has highlighted the need for health care services in south-east Queensland, both now and into the future,” according to the application.

The new plans were consistent with an existing approval from 2015 with the amalgamation of lots, realignment of the road behind the site and construction of a new road. 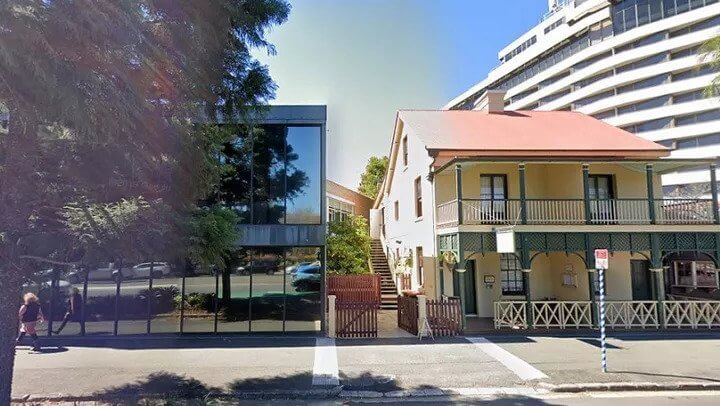 The Arkhefield design was described as contemporary and had to be mindful of the historically-significant Theosophical Society Building next door; an 1860s duplex which was converted into medical suites by notable architect Robin Dods in 1912.

“The new podium references the composition and elements of the vernacular verandah forming part of the heritage building, through inclusions within podium facade such as columns, batten screening and trellis,” according to the application to Brisbane City Council.

The design had a focus on natural light and ventilation with large windows and a breezeway on the tower levels beside the lift.

Barber Property Group have completed over $150 million worth of projects in the past 30 years in south-east Queensland such as the Jephson Hotel in Toowong and Quest on Story Bridge. 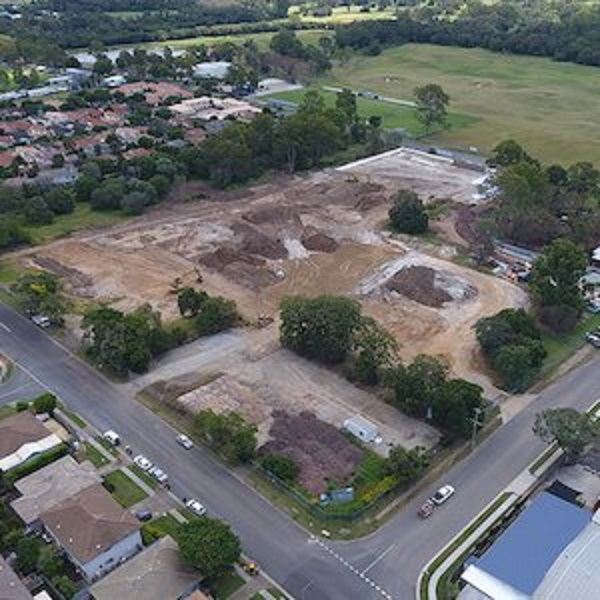 The 5.2 hectare residential community, developed by Frasers Property Australia, is scheduled for completion in early 2022.

Once finished 480 people are expected to call Minnippi Quarter home.

“We are thrilled to be involved in such a prestigious project that boasts a great combination of land, terrace home product and outstanding amenities in a highly sought-after area,” says Condev Construction managing director Steve Marais.

“It’s been terrific working with Frasers Property Australia again and it’s rewarding to continue being a part of their expansion.

“Condev have experienced significant success on the Gold Coast and it’s our strategy to further establish ourselves as a construction company of choice in the Brisbane area.”

Around 25 per cent of the community, which will border Minnippi Parklands, will be dedicated to green space and resident amenity.

Some of the amenities planned for the community include car and dog wash facilities, secure parcel lockers, private dining room and entertainer’s kitchen, 6,000 square metres of private parkland and a pool pavilion with BBQ dining.

This article is republished from www.businessnewsaus.com.au under a Creative Commons license. Read the original article.