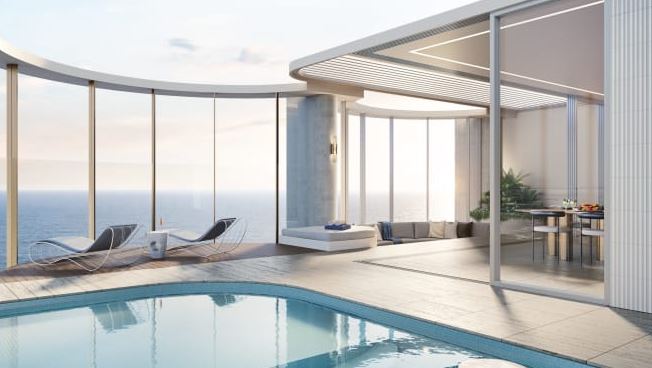 A locked-down Sydney buyer has snapped up the penthouse in the Gold Coast’s own apartment principality – The Monaco – for $9.5 million, as developer Ignite Projects pushes forward with construction next week ahead of an imminent sell out.

The Monaco, which has been two years in the making, is being developed by Ignite Projects and built by McNab Builders, opposite the Southport Yacht Club at the doorway to the much-loved Spit.

The Sydney-based buyer of the expansive two-level 630 sqm penthouse was impressed by the design and unrivalled location, and plans to use it for his ‘forever home’.

The penthouse sale caps off a buying rush with all but one of the 24 residences in the $110 million building sold with an average sale price of $4.6 million. 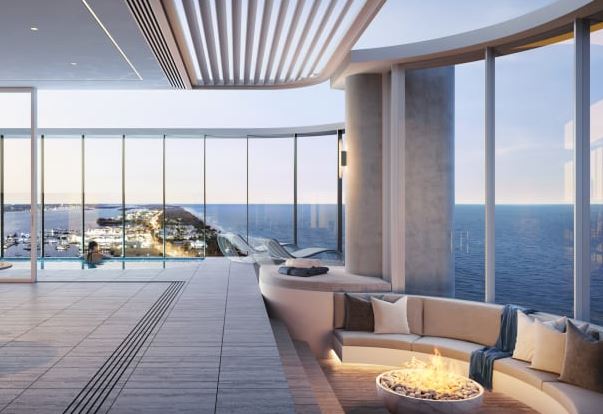 Ignite Projects managing director Josh Foote said buyers in the opulent development will have the veritable keys to the kingdom when construction is completed in 2023.

“The Monaco in many ways represents the renaissance of Main Beach, with the building replacing an aging unit block and a well-known house, referred to locally as the ‘container home’,” Mr Foote said.

“The building is setting a new standard for the suburb, which is getting a well-deserved facelift thanks to the $205 million revitalisation of the Spit to turn it into the Gold Coast’s version of Hyde Park and a 300-berth marina at The Southport Yacht Club.”

Mr Foote said buyers have been attracted to the attention to detail and customisation options available in the residences.

“Buyers can customise their apartment, including their entire kitchen and have access to first-class facilities including a 24-metre heated pool alongside a private dining area and virtual golf simulator,” he said.

“I liken each apartment to an art gallery because of the thought that has gone into every aspect from the Greek marble and Spanish handmade wall tiles in the ensuite through to the designer cocktail bar and fluted columns throughout. It is all about luxury and refined living.”

“Each apartment in The Monaco has the feel of a penthouse with unrivalled luxury,” Mr Erwin said.

“The apartments in The Monaco have sold really well and to be almost sold out before construction even starts is an amazing achievement.”

“Buyers have come from interstate and locally within Main Beach, which is the home of luxury apartment living on the Gold Coast.

The Monaco contains a collection of 25 full-floor and half-floor residences at 2-4 MacArthur Parade, Main Beach. 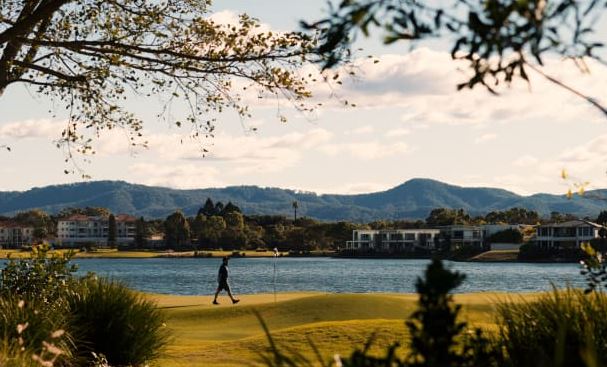 Whether you’re a fan of golf, enjoy boating, or dream of spending weekends relaxing by a pool, then you’ll love the property we have to show you today.

PENINSULA COLLECTION AT A GLANCE 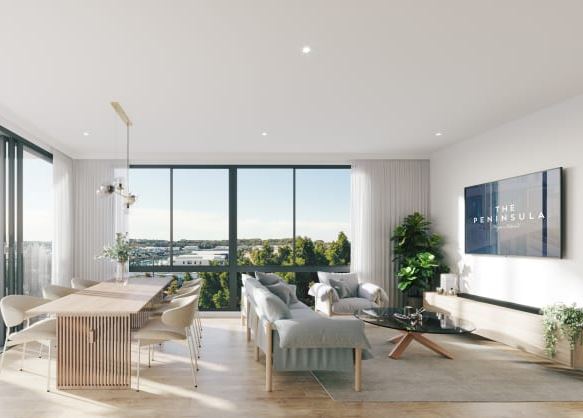 Peninsula Collection is the final release within the Hope Island Resort, following the sell-out-success of Peninsula Terraces.

Securing a home within this prestigious gated community isn’t an opportunity that comes around often, which is why we are excited to share this property with you.

While the display suite may be small, the resort is anything but – with 5-star amenities already built and ready for you to enjoy.

Swap your rush-hour commute to a cruise on your very own golf buggy, as you navigate from the pool to the tennis courts, or around the three championship golf courses, the island has to offer.

Another aspect we love about Peninsula Collection is the convenience of its location.

You’re just a stone’s throw to Hope Island Shopping Centre as well as the marina – which offers boaters and yachters bridge-free and open-ocean access.

Plus, you’ve also got the added comfort of an in-built security button and 24-hour medically-trained security on site.

You’d think homes like these must come at a premium; however since they are community strata-titled apartments, you get to enjoy a spacious, brand new home in a great location with world-class amenities for a fraction of the price.

Not to mention, all Peninsula Collection residences are FIRB exempt – allowing you to tap into the global market for potential capital gains.

A three-bedroom home with two bathrooms and a parking space starts at just $565,000, one of the lowest price points on the Gold Coast market. 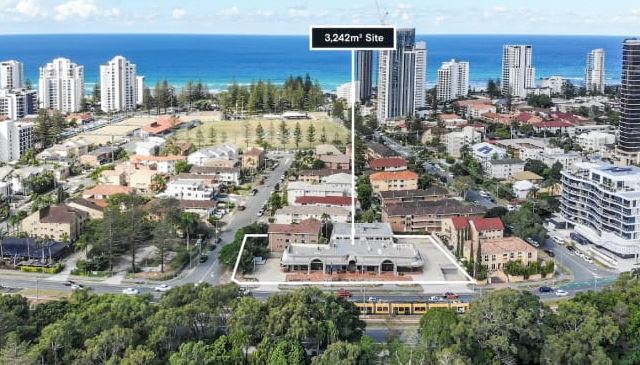 Sites have become invaluable, and it’s a case of picking off the old, tired buildings on prime land which will make way for new, flashy apartment towers

Large development sites on the Gold Coast are in as short supply as the apartments at the moment, with Urbis data suggesting there are just over four months of supply of apartments if sales rates continue as they are and there are no new projects released.

Sites have become invaluable, and it’s a case of picking off the old, tired buildings on prime land which will make way for new, flashy apartment towers.

GV Property Group founder Antonio Mercuri, who started the company around six years ago knocking on doors, along with his right hand man Luke Reaby, are starting to see an uptick in apartments vendors willing to band together to get the maximum price they can from developers, who are coming from all over the country to build apartments on the Gold Coast.

Within a week, Mercuri and Reaby managed to take the site a step further, amalgamating the site next door by contacting the owners of the adjoining six apartments at 16 Rosewood Avenue, adding a further 647 sqm to create the huge 3,242 sqm corner site which has unlimited height zoning. 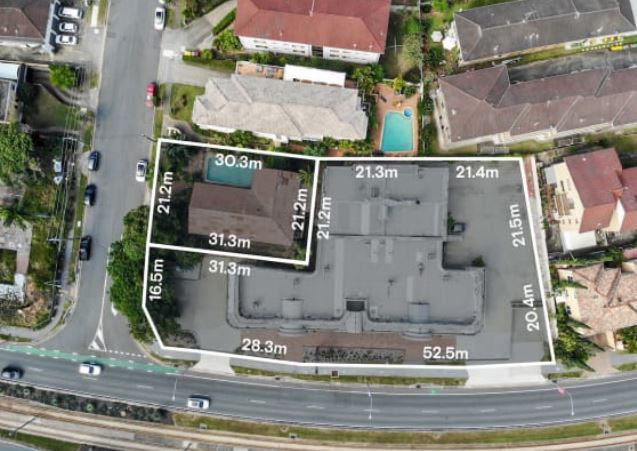 2769 Gold Coast Highway and 16 Rosewood Ave is for sale via expressions of interest, closing October 8. For more information,

Reaby advises that the maximum tower floorplate on the Gold Coast is typically 750 sqm, suggesting ‘the site could accommodate two towers which would fit perfectly within the site cover guidelines.

There’s also a rare proposition of having two or three podium levels, which would create a striking facade from the street level and above ground parking.

Dual tower developments have seen great success in the past in the area, with Meriton Suites and Oracle still popular at Broadbeach.

And there’s plenty of mega-developments in the pipeline with more than one tower planned for these larger amalgamated sites, with the aim to create a sky-high resort for residents.

The Shanghai-headquartered international property developer SPG Land, in a joint-venture with Australian developer Gordon Corp, has lodged $800 million plans for nearly 800 apartments to be built across three towers in the heart of Surfers Paradise.

They will be anchored by a new ground-level retail and dining plaza at the street level Ferny Avenue. The 1.15 hectare site will be bounded by Ferny Ave, one of Surfers main streets, as well as Surfers Paradise Boulevard, Pandanus Avenue and Ocean Avenue near the Surfers Paradise North light rail station.

The latest was of course the $1.25 billion plans laid by the Melbourne-based developer Gurner, led by the high-profile developer Tim Gurner, just up the road.

The 11,000 plus sqm site at 108 Ferny Avenue will be known as La Pelago, and will comprise four huge towers with nearly 1,000 apartments, around a quarter dedicated to a hotel.

There’s been international interest for a massive 5,726 sqm site at 3006-3016 Surfers Paradise Boulevard, which already has development application application for Orion Towers, a mixed-use development with two towers and over 1200 apartments.

But Reaby reckons there’s a great opportunity for a build to rent operator, with current vacancy rates at all time lows.

“The site would allow for well over 200 apartments for a build to rent operator”, Reaby says, however admits the likelihood is of two residential towers, or one hotel and one residential tower. 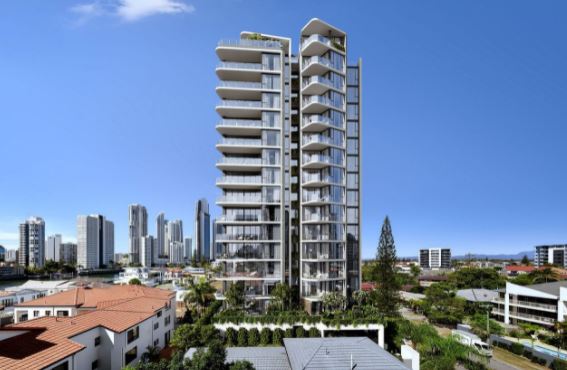 Brisbane-based developer Siera Group has lodged plans for its maiden development on the Gold Coast, a $75-million apartment tower on Chevron Island.

The 1500sq m site, an amalgamation of three addresses between 39 and 43 Darrambal Street, was purchased off-market through a local agent for a combined price just shy of $5 million.

Leaning into the work-from-home phenomenon, the development will also include a 70sq m private office space including a boardroom, kitchen, hot-desking and video conferencing space as well as on-site printing facilities.

Siera Group managing director Brent Thompson told The Urban Developer it had worked closely with a team of Gold Coast-based consultants to deliver a product for local owner occupiers while supporting local businesses and the local economy.

“Over the last 18 months we have begun transitioning our business from townhouse projects towards medium-density apartment projects, particularly on the Gold Coast,” Thompson said.

“We’ve spent a lot of time looking at developments coming online from Surfers Paradise right down to the NSW border to understand the types of developments that are being brought to market.” 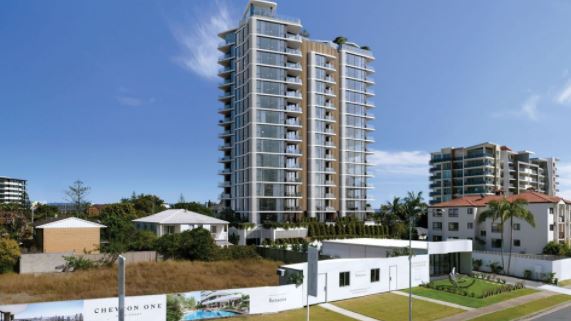 ▲ The Benson Family Group is currently forging ahead with plans for a 40-storey tower, known as Chevron One, on a neighbouring site on Stanhill Drive. Image: BDA Architecture

Chevron Island, on the doorstep of Surfers Paradise, the Southport Golf Club and the Home of the Arts (HOTA) precinct, has become a hotspot for development with up to 15 mid-rise developments currently approved or under construction.

Demand on the Gold Coast has been fuelled by recent migration led by pandemic-inspired sea-changers and intrastate downsizers which has led to record apartment sales and supply levels falling to historical lows.

Since 2014, Siera has forged a track record of building projects purely for owner-occupiers—typically living within three to five kilometres of its projects.

“There’s currently a lot of high-end, expensive, on-beach apartment projects going up and we saw a lot of opportunity for special sites, off the beach,” Thompson said.

“These sorts of sites are still very centrally located to all the amenities the Gold Coast has to offer while being within reach of local owner occupiers.

“As a developer, we are tuned into the wants and needs of this demographic and we have identified, over our many years within the industry, the areas of importance to build into our projects.” 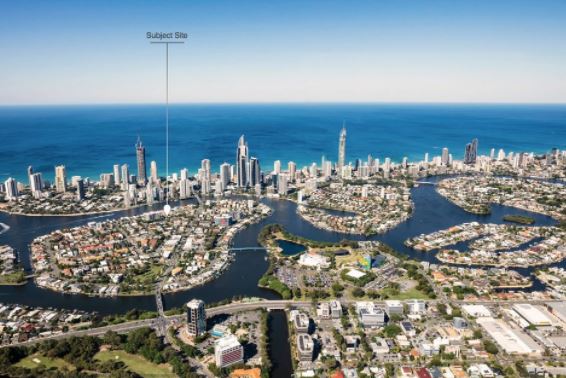 ▲ Siera zeroed in on the site due to its connection to the beaches and amenity of Surfers Paradise as well as to the cultural hub of the HOTA precinct.

The developer has engaged local artist Tania Blanchard to commission a painting for the lobby that symbolises the interwoven connection between community, river, hinterland and beach.

“Chevron Island really is an emerging cultural precinct with a great sense of local community and the aim of this development is to deliver it at a really good price point for the local market,” Thompson said.

“The development celebrates the Gold Coast’s urban fabric and pays homage to the neighbouring HOTA precinct which the Gold Coast council is investing heavily in.

“It will act as a continuum of the arts precinct, offering a lot of soul and artistic integrity firstly through its architecture, but also in its amenity by showcasing local art within the building.”

The group, which has acted as both developer and builder on all of its prior projects, has engaged an external Gold Coast-based builder to deliver the project.

If approved, the project is expected to launch to market later this year with completion earmarked for late 2023.

Siera currently has a second site on the Gold Coast with plans being finalised and expected to be lodged to council in early 2022.