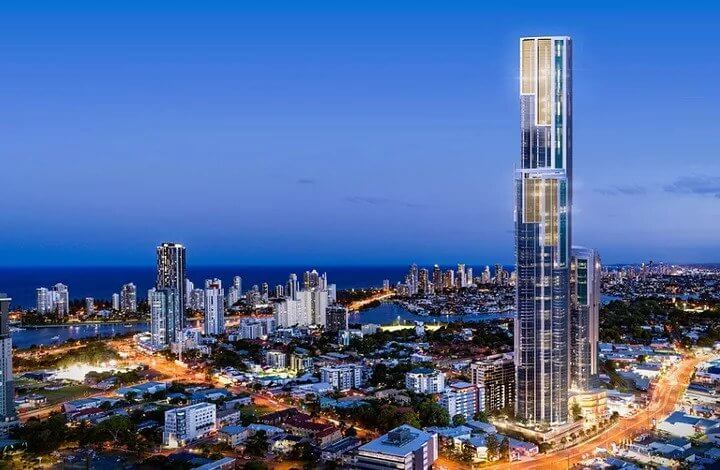 Azzura Investments is set to commence construction on the
$2.3 billion Imperial Square project on the Gold Coast, which includes a 108-level super tower set to be one of Australia’s tallest buildings.

Stage one plans in the Robert Badalotti-led development comprise an 18-storey tower with 145 apartments and a boutique 200-room hotel at 59-73 Meron Street, Southport.

The development application for the $155 million tower was approved in January with preliminary approval given to the rest of the build in 2016.

It is the smallest of the four towers planned on the site, with construction of the tallest building at least five years away.

Stage one, Regal Residences, had a mixture of one, two and three-bedroom apartments including two rooftop penthouses, an infinity pool, gymnasium, spa, executive lounge and restaurants. 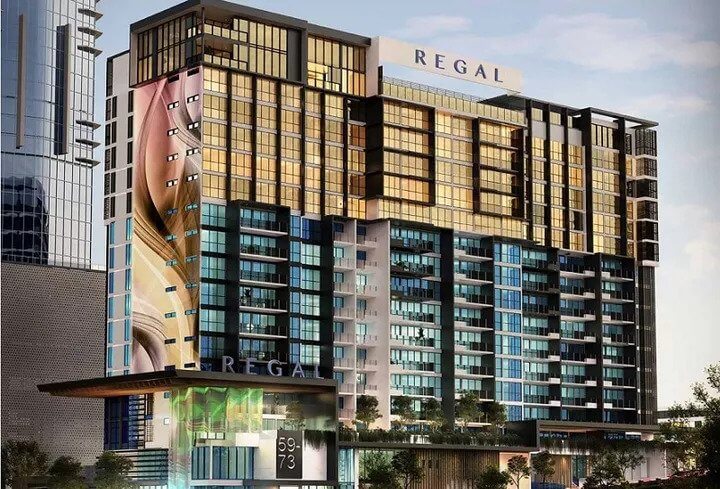 Azzura originally planned for a 210-key hotel and 420-room student accommodation on the site, however amendments were made to the plans in 2019.

The new plans designed by Kris Kowalski Architects also include 222 car park lots, space for 132 bicycles and a pedestrian link from Gillian Lane to a future plaza at the back of the development site.

“We are absolutely delighted to be bringing a project that has been the subject of meticulous planning and design for more than three years,” Badalotti said.

“This is a defining project not only for Southport city’s cosmopolitan hub but for the Gold Coast in general, taking advantage of the enormous infrastructure such as the light rail, the new Gold Coast Hospital and Griffith University.”

Member for Southport Rob Molhoek said the only way was up for the area, which had suffered a blow from Covid-19.

“[There are] an expected 300 jobs in this stage alone and a huge investment in our Southport CBD,” Molhoek said.

“It is great to see such confidence in our city with the very uncertain year we’ve been having.”

Restrictions on travel during the pandemic hit the holiday destination hard, however a $1 billion state tourism campaign encouraged Queenslanders to holiday at home and support the industry.

Domestic travel is expected to replace the international tourism industry, although the sunshine state is yet to open its borders to the rest of the country. 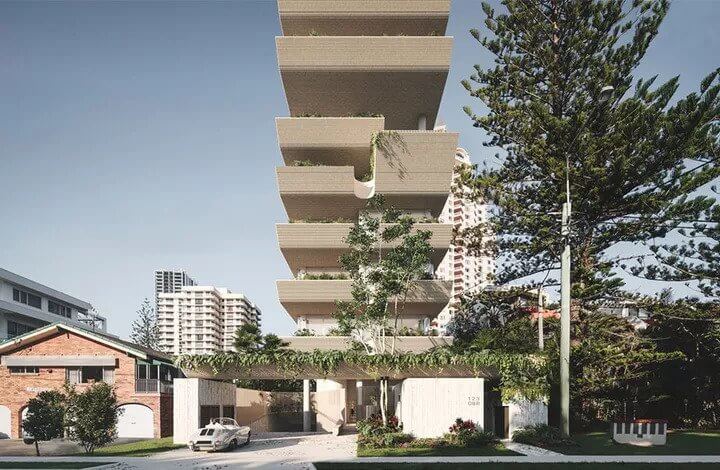 Development plans for a high-end 17-storey residential building on Broadbeach’s Old Burleigh Road have been given the go-ahead by Gold Coast council.

The project comprises 14 “vertical beach houses” across 17 floors, with the developer vying to attract buyers from the luxury segment of the market when the project launches in September.

Bottega is working with planning partner Urbis and builder Hutchies on the project, dubbed 123OBR, after securing the site for $3.25 million.

Bottega Group managing director Nick Malloch said construction is pegged to start early next year, but could begin earlier subject to a run of successful pre-sales. 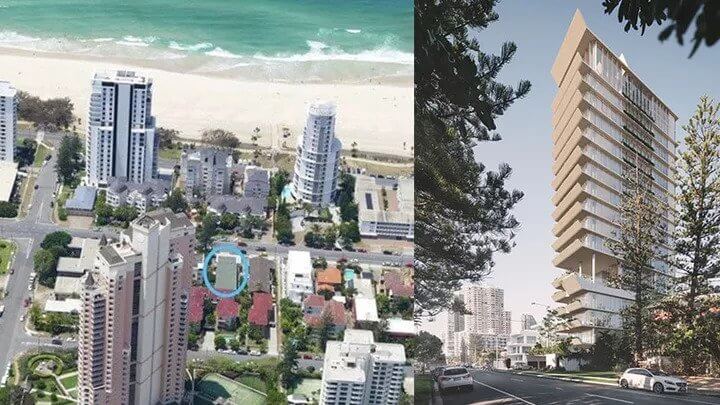 Malloch describes the Woods Bagot-designed project as a vertical stack of beach houses with a nautical reference.

“Our vision is to truly unlock creative freedom with our project partners through collaborative design,” he said.

In its most recent quarterly survey, Urbis said the Gold Coast apartment market had recorded 265 sales in the first quarter of 2020, this sits above the two-year quarterly average of 238 sales.

Construction activity under way at the Gold Coast includes work on Robert Badalotti’s mega $2.3 billion Imperial Square project—which comprises a series of skyscrapers including the 108-level tower set to be one of Australia’s tallest buildings— expected to start in Southport.

And Sunland Group, which recently offloaded a 46.4-hectare subdivision site at Pimpama for $29 million, is tracking with sales at its $250 million high-rise project at Mermaid Beach.

Located on a 1,821sq m waterfront site, Sunland’s Soheil Abedian said it has sold 90 per cent of its 98-apartment tower project at 272 Hedges Avenue. 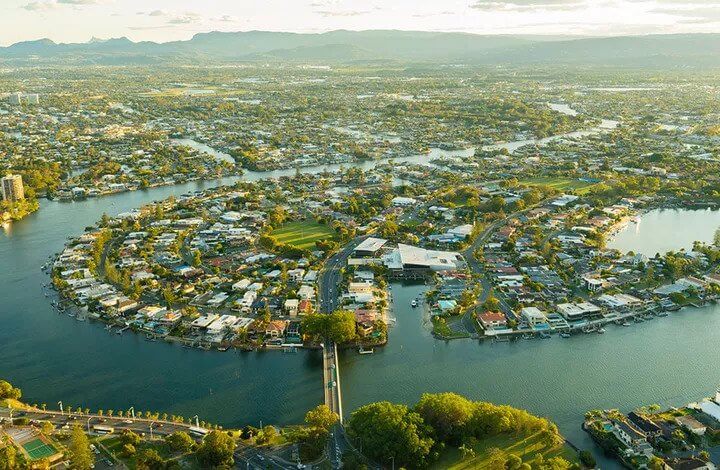 Regional Australia attracted more people than it lost to capital cities during the last census, reveals a new report, which also found Sydney lost more millennials to the regions than it gained between 2011 and 2016.

The report unpacks population trends around the country, taking in national census data from between 2011 and 2016.

The research places an emphasis on millennials—people aged between 20 and 35 years at the 2016 census date—because the cohort is likely to have young families, be working at early-mid career levels or in trades, and is also increasingly likely to purchase residential property in regional areas.

“Like all Australians who moved between 2011 and 2016, the mobility of millennials reflects a ‘voting with their feet’ to find the mix of work and lifestyle that they value,” Ritchie said.

Sydney was the only city to see a net outflow of millennials between 2011 and 2016. All other cities saw net inflows of millennials, with Brisbane and Melbourne each seeing the largest inflows, more than 10,000.

The top three regional destinations for millennials to move to during the last census period were the Gold Coast, Newcastle and the Sunshine Coast.

Movement between capital cities and regions

“From 2011 to 2016, our two biggest cities, Sydney and Melbourne, lost more residents to regions than they gained—and this was well before Covid-19,” Ritchie said.

“Over the last few months, we’ve all had to change how we work and this has allowed staff and employers to see that location is no longer a barrier for where we choose to work.

“As a country, we are an extremely mobile nation, and we have a propensity to change our address at twice the rate of people in most OECD countries.

“If location is no longer a barrier for employment, it’s possible that the trend line over the next decade could see an even greater swing to regions,” she said.