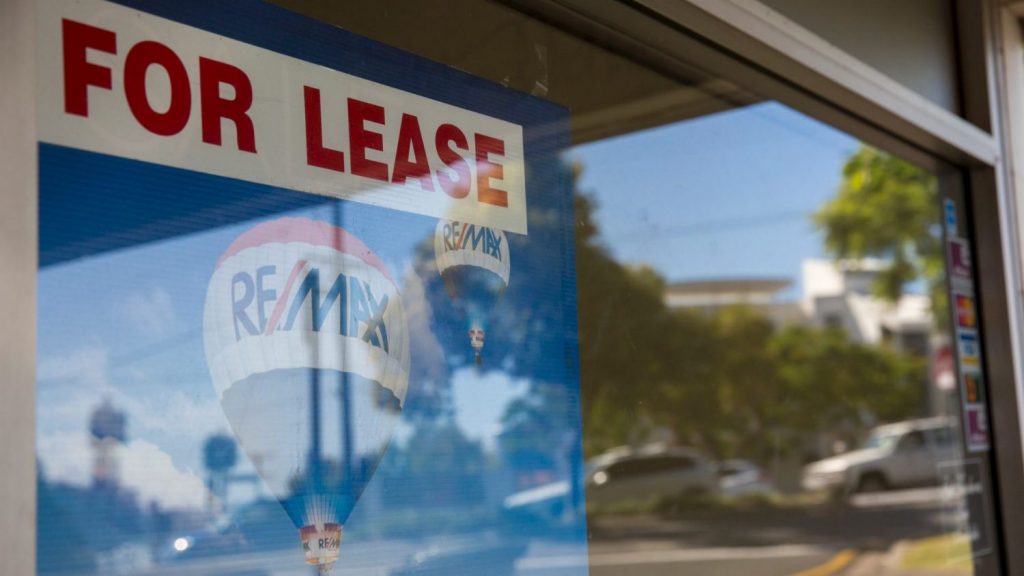 It will take a large shift in Brisbane’s housing market if investors are to see any increase in rents in the near future, experts say.

It comes as the latest Domain Rental Report shows rents were flat in Brisbane over the December quarter.

The median asking rent for houses is still $400 a week, with no yearly or quarterly change. Units rents are now slightly weaker, at $370 a week, down from the same time last year, when landlords were asking $375.

Domain data scientist Nicola Powell said stagnated rent had been the norm in Brisbane for five years or more. Dr Powell didn’t expect that to change any time soon.

“I think it will take a large shift in the market. These tighter lending conditions will make it harder for investors to get finance,” she said. “It will take a while to see an output in terms of increased rents.”

Dr Powell said housing stock was tightening, but not enough to counteract the recent influx of apartments.

“We’re already seeing the advertised stock in the greater Brisbane area decline and that is for houses and for units,” she said. “In the unit market they’re still impacted by oversupply.”

“The last 12 months has seen a number of new accommodation precincts come out of the ground. What that does is drag down the median price,” he said. “They’ve offered huge incentives and it’s left mum and dad investors unable to compete.”

Mr Cush said until landlords were financially pushed into a corner, they wouldn’t be too concerned about the flat rents. “They’ve been a little more accepting of lower rents and may not be expecting year-on-year growth,” he said. “At the moment it’s easier for a decrease to happen in the market, because of the low interest rates.

“But if there was a rise in interest rates, landlords would be more bullish.”

Dr Powell said that it wasn’t all bad news for Brisbane though. Despite flat prices and declining yields for both houses and units (down 0.3 per cent and 0.2 per cent, respectively), she said the river city still had the benefit of the third-highest yields in the country. 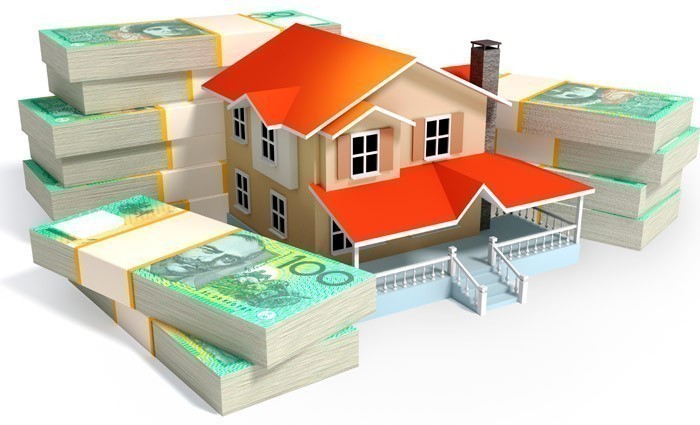 Australian proptech startup :Different has announced it raised $3.5 million in its latest funding round to continue its national expansion.

The fund raising coincides with the company’s launch into Brisbane today.

:Different is a full-service property management startup where property owners pay a fixed fee of $100 per month instead of a percentage based on the rental price of the property.

The appeal of :Different is their tech base which automates the everyday tasks of a property manager.

Over the last 12 months, :Different’s customer base has grown five folds with more than $700 million worth of properties now under management across New South Wales and Victoria, while its team has quadrupled to 32.

The latest funding round supports :Different’s ambitions to expand into new markets, further enhance its tech platform and continue to build its team of expert property managers, said Mina Radhakrishnan, Co-Founder at :Different.

“We’ve already had huge success since launching in Sydney and Melbourne, and we’re thrilled to offer the same great offering to Queenslanders,” Radhakrishnan said.

“We have big growth ambitions for :Different. This latest funding round will help us continue to rebuild property management in Australia and beyond.” 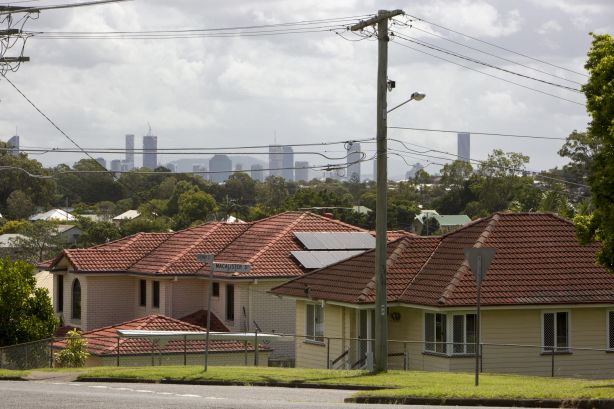 Brisbane landlords are now back in the driver’s seat, with asking rents holding at record high prices, new data shows.

The median asking rent for houses increased from $400 a week to $410 in the December quarter, lifting for the first time in nearly three years – and the latest Domain Rental Report released on Thursday showed those prices continued to hold strong over the first quarter of 2019.

It’s great news for Brisbane landlords, potentially signalling the end of what had been a tenants’ market for a number of years. 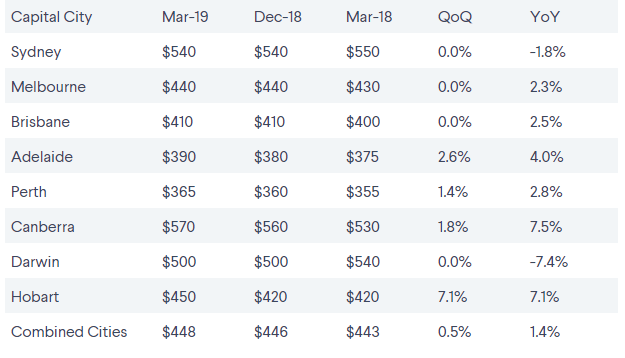 “We know what Brisbane went through was a period of heightened rental supply, thanks to that development boom, but that stock is now being absorbed because the boom is over.

“Added to that is Brisbane’s relative affordability and rising job prospects, which continue to draw residents from interstate. Major infrastructure projects are set to inject significant economic benefit through job creation and spending in the coming years.

“So Brisbane tenants are going to find the rental market is entering new territory. Because the stock is shrinking, the competition to get rentals will increase.” 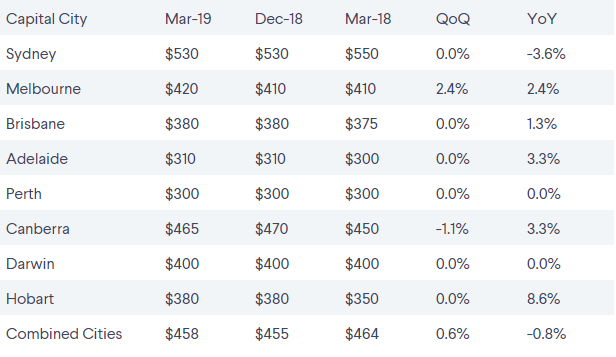 But Dr Powell said the pendulum would not swing in landlords’ favour overnight.

“Look, it’s not going to be an instant turnaround for landlords, they’re not going to suddenly see soaring rents — but what we know is that tenants are already finding the choice is narrower,” she said.

“It’s going to be a slow burn as that stock gets absorbed … but all signs point to a tightening of the rental market.”

Brisbane rents may be on the rise, but it is still one of the cheapest capital cities in Australia to rent a house or unit, even coming in more affordable than Hobart for houses.

Only in Adelaide and Perth is it cheaper to rent a house or unit.

The Gold Coast remains Queensland’s most expensive place to rent, with a median rent of $500 a week for houses and $430 a week for units. It’s also one of the tightest rental markets in the state, with a lack of supply continuing the drive in price increases. Houses and units are up 2 and 2.4 per cent respectively over the year.

Eadan Hockings, principal of Living Here Cush Partners at Teneriffe, said most of Brisbane’s rental market was performing really well but was being held back by smaller, investor-led developments.

“The feeling is definitely that good quality product is certainly leaning in the landlord’s favour now,” he said. 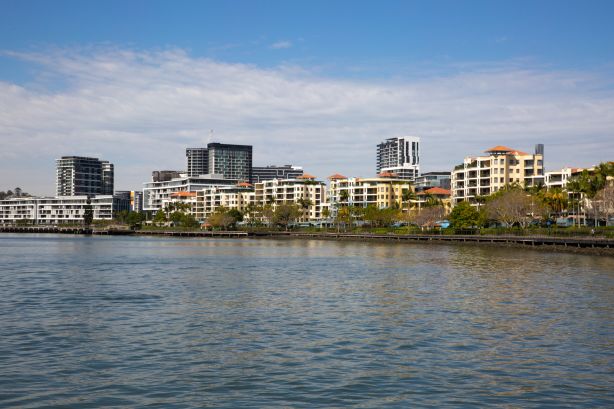 “If it’s a nice, spacious unit or a well-renovated home, there are several people turning up to open homes and making their applications more attractive to secure the tenancy.

“However, what we are still seeing is that units of a smaller dimension built by the developers with the intention of maximising profits are still not renting well at all.

“My feeling is that that is holding the whole market back — the rest of the market is performing as well as I’ve ever seen it.”

Mr Hockings said most of the smaller, cookie-cutter units that developers targeted at investors had not recovered from the rental price falls from a few years ago, which had a flow-on effect to better properties. 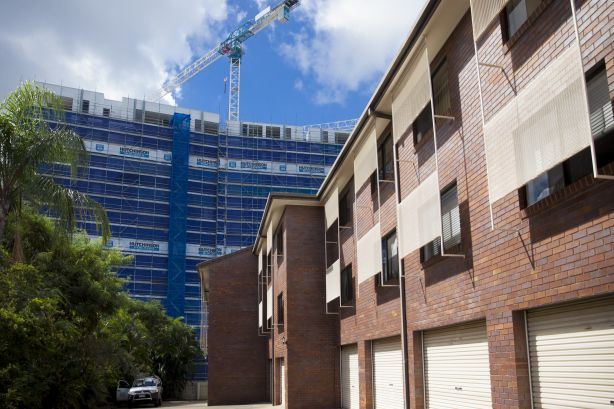 “That’s a style of product in particular that is going really poorly. They haven’t recovered yet,” he said.

“What that means is that, even when you’ve got a really nice quality unit, tenants are still of the opinion that it’s ‘their market’, so they’re still going hard negotiating with the rent, simply because they’re used to it.”

However, Brisbane’s rental yields remain some of the strongest in the country, with units achieving an impressive 5.23 per cent.

Houses are yielding 4.61 per cent, one of the highest yields of any capital city in the country.

Dr Powell said the tightened supply and increased demand from interstate migrants would continue to put pressure on the market, eventually driving up prices and yields.

“The federal budget’s infrastructure focus, which includes the announcement of fast rail connecting the Sunshine Coast, and the Gold Coast, to Brisbane, will help to boost local confidence, attract interstate residents and place additional demands on the rental market,” she said.

How to attract and keep top tenants in your rental property 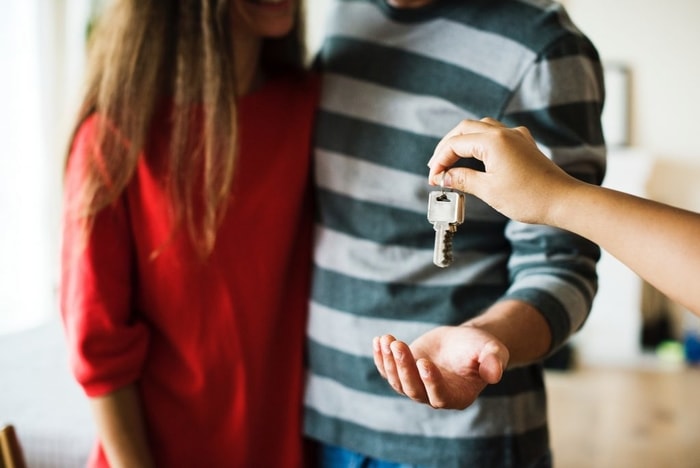 Being a landlord isn’t always easy. Dealing with tenants who are bad payers or appear to be on a mission to turn your rental property into a rubbish tip can be time consuming and stressful.

Renters currently have the upper hand in many Australian cities. Inner-city Brisbane, for example, has experienced a high volume of apartment construction in recent years and landlords have had to reduce rents and offer incentives to lock in leases.

With renters able to pick and choose, landlords need to try harder to ensure they attract –and keep – top quality tenants.

Here are some tips for achieving this:

The way you present and market your property will influence the type of interest you receive. If a rental property appears dirty and unkempt, prospective tenants may assume you’ll be equally lackadaisical once they’re in residence. This may be appealing to those who share your ‘relaxed’ approach to home and garden care, but it’s likely to be a turn-off for renters who keep things in proper order. The better the home looks and feels, the higher the calibre of applicants you’ll attract (and the higher the rent you can potentially command).

Faced with the choice between your dwelling and another that’s broadly equivalent, tenants are likely to go for the property that offers extras that add to their comfort. Installing air conditioners in the living room and main bedroom may tip the balance in your favour, or deter good sitting tenants from considering their options during the summer sizzle. Similarly, a dishwasher in the kitchen and freestanding wardrobes in bedrooms that lack built-ins are modest investments that can make a big difference.

Not everyone has a green thumb. Ensuring garden maintenance is as easy as possible can make your house or townhouse appealing to renters who may be good payers, but don’t have the time or inclination to mow and prune. Consider providing a green bin, include a monthly or quarterly yard clean-up in the rent and plant shrubs and trees that require minimal TLC.

If you want tenants to take good care of your property, it pays to demonstrate that you’re committed to looking after their personal property too. Installing security that’s appropriate to the home and the neighbourhood can provide peace of mind and make it cheaper and easier for tenants to obtain contents insurance.

Having to ask repeatedly for something to be fixed is irritating, particularly if the request is reasonable. Attending to repairs as soon as possible tells good tenants you respect them and value the relationship. Conversely, making them wait weeks for maintenance requests to be actioned may result in them looking elsewhere for a landlord who can keep up their end of the bargain.

The market will determine the rent you can charge. If what you’re asking isn’t on par with equivalent dwellings in the same area, renters will assess their options. Should a lease be due to expire and you’re happy with the tenant, it’s wise to be realistic about rent rises – or open to the possibility of a reduction if the market has dropped. Keeping a good tenant is usually easier than finding a replacement