The developer, led by Tim Forrester, has identified the region for its growth, and lack of five-star hotel accommodation limiting the range of tourists visiting the Sunshine Coast.

The region is also set for massive change through the construction of a new $225 million runway at the local airport which will facilitate direct flights to and from Asia and bolster development of the new CBD in neighbouring Maroochydore.

Aria’s latest approval, located at 1 The Esplanade in Mooloolaba —opposite Mooloolaba Surf Club, draws on its previous projects on Brisbane’s Edward Street and the emerging Fish Lane precinct.

The 2,591sq m site, including retail and two small stand alone houses, was amalgamated and bought back in 1991 by Rod Forester.

Aria has been working on this project for over a decade and intensively for the last five years. 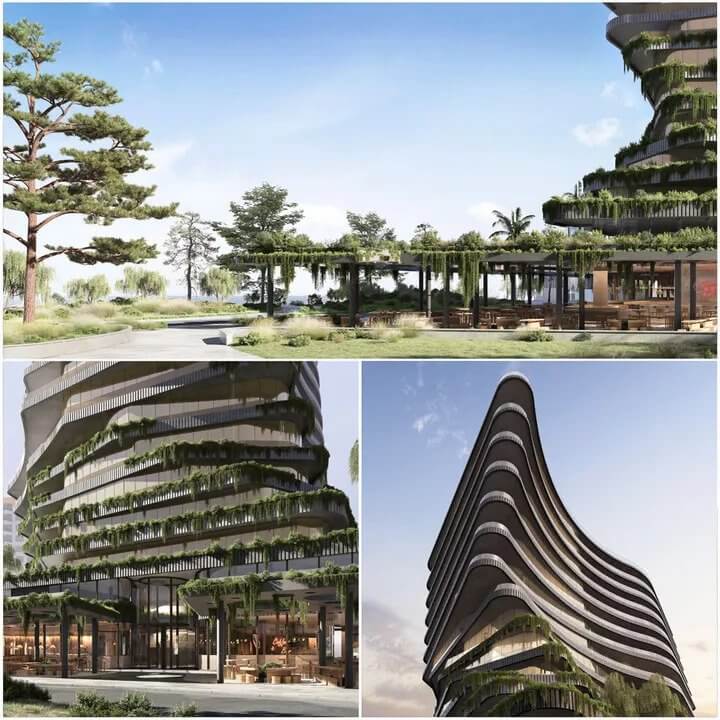 In a tentative lending market, the five-star development will be tailored to owner-occupiers with 66 residential apartments, as well as an international standard hotel comprising of 139 guest rooms.

The developer tapped architecture firm Elenberg Fraser to design the tower, which is located on the last available section of the Mooloolaba Esplanade.

The integrated resort will feature 1,764sq m of retail and restaurants, a day spa, conference facility and publicly accessible roof-top bar and restaurant.

“Both Tim and I grew up in Mooloolaba, and for us it is home,” Aria development director Michael Hurley told The Urban Developer.

“It’s incredibly rare to find a beach within Australia, that’s north facing, protected by the headland, bounded by the spit, river and harbour.

“This combination with an amazing array of beachfront accommodation, quality dining options, retail, amenities and activities already in place creates the perfect mix for anyone to live or holiday in Mooloolaba.”

The project’s rooftop will reference iconic buildings like the Marina Bay Sands in Singapore, W Hotel Barcelona and One Hotel South Beach Miami.

“We are starting to see and feel a real buzz beginning to happen in town, and you just have to look at the amazing things that the Matt Evans & Dirk Long have done in transforming the Wharf into a thriving retail and dining precinct, SCRC embarking on stage one of the Mooloolaba Masterplan with its new boardwalks and carparks,” Hurley said.

“All of these projects are a real credit to the leadership and vision of the council.”

Aria now aims to release residential units for sale in 2020 ahead of a 2021 construction start.

Earlier this year, Aria lodged plans for a 13-storey, 127-apartment residential tower in Brisbane’s Kangaroo Point, where Aria Living will be enacted. 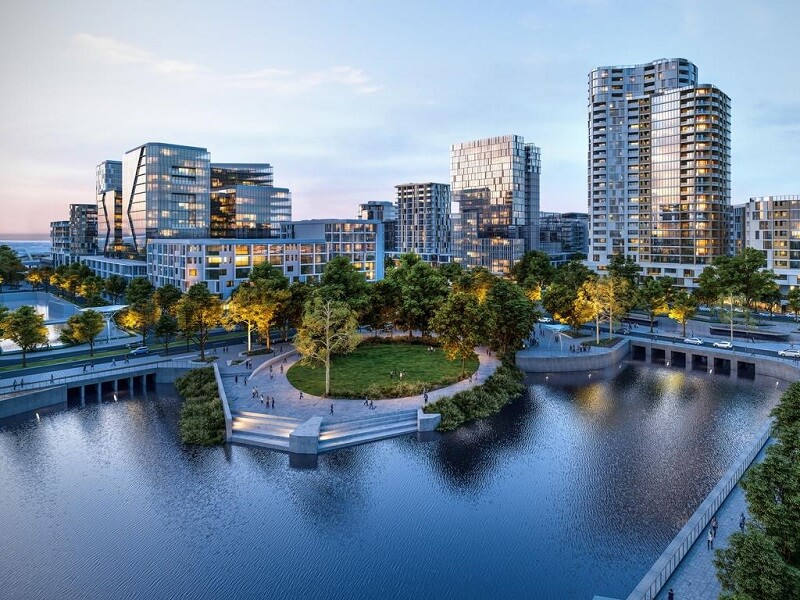 The new city center of Maroochydore is slowly taking shape and, according to developer SunCentral, is already helping to drive real estate growth in the nearby Sunshine Coast suburbs.

The new Maroochydore City Center is located on a former 53 hectare golf course and is one of the largest CBD projects in the green field in Australia.

John Knaggs, SunCentral’s chief executive officer, said that the project, when completed, would deliver commercial, residential, retail, and mixed-use projects along with public green spaces such as parks, squares, and waterways.

“Maroochydore’s new CBD is expected to create more than 15,000 permanent jobs on the Sunshine Coast and bring in more than $ 4.4 billion to the local economy,” Knaggs said.

“The total construction cost for the 20-year project is estimated at $ 2.1 billion.”

After more than a decade of planning, the first stage of the Maroochydore City Center was officially opened to the public in August. The first buildings are under construction.

“Maroochydore’s CBD will be at the heart of a region where unprecedented investments in private and public infrastructure are being made,” said Knaggs.

“The confidence of companies on the Sunshine Coast is strong as the economy is growing four times faster than the Australian one.”

According to a real estate report by analyst Terry Ryder, average property prices in the Sunshine Coast suburbs have risen by up to 37 percent. These include the Twin Waters suburbs, which grew 21 percent last year, and Mooloolaba, which grew 14 percent.

“The new CBD is at the heart of this growth. It provides a center for the growing economy and employment opportunities of the Sunshine Coast while helping to boost housing price increases in the region,” said Ryder.

The local government districts of Sunshine Coast and Noosa are expected to reach 580,000 residents by 2041.

“In fact, the region is now tending to shortage of new housing. The Property Council of Australia warns that the Sunshine Coast cannot keep up with demand.” 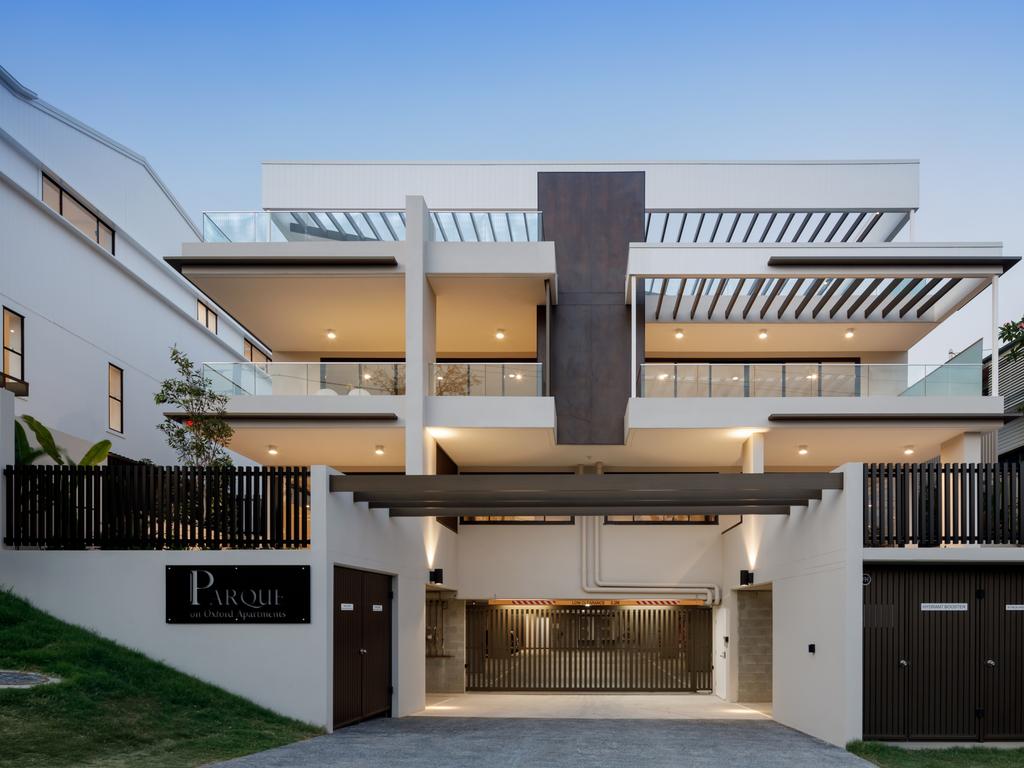 They say that size matters – and for some, it certainly is when it comes to buying property.

The privacy, storage and contemporary design of the Velocity Property Group’s Parque on Oxford apartments and townhouses give downsizers good reasons to put Taringa on the coveted location list. The sales were already made in the recently launched development.

With the completion of the 3-room apartments, the emphasis on warehousing was well received by buyers.

A focus on large, open living and dining areas and an airy, bright ambience thanks to clever design that makes optimal use of the urban view were also a success.

The Parque on Oxford Apartments were designed in a modernist style to create sophisticated, large executive residences that could be anywhere in the world.

The building designed by HAL Architects in Brisbane appears solid, slim and solid and has a sculptural design piece that anchors the two sides.

The Parque on Oxford Apartments offer pergolas for natural light and shade as well as privacy, great views and a captivating breeze.

Five of the seven apartments are still available in the housing estate on Oxford Terrace. The focus is on privacy as well as the low-maintenance design and the beautiful surfaces. The apartments range in size from 183 to 254 m² and cost USD 995,000. Most have a media room or an office.

The 11 townhouses were designed with a subtropical, modern Queensland feel to capture the height and elevation of the place.

With three levels, excellent surfaces and plenty of storage space, thanks to forward-looking planning and architecture in some residential buildings, they also offer the option of including elevators for the future.

In addition to the Parque on Oxford, the Velocity Property Group also built condominiums in Ellerslie Crescent in Taringa to take advantage of the city view and elevated location. Only two of them are left.

Ms. Humbert said there were four main ingredients that downsizers were looking for in townhouses or apartments, all of which would be delivered at the Parque on Oxford.

“The first ingredient is storage, storage and more storage. Downsizing is not about sacrificing everything you have collected over many years to move to a smaller residence. It’s about bringing what you really love to your new home and storing it comfortably, ”said Ms. Humbert

“The second thing that downsizers are looking for is the best possible results. Many downsizers consider this phase of their lives to be their final home forever. They therefore want to enjoy the best kitchens and bathrooms they have ever had.

“The third ingredient is to lock yourself up and lose your life. Downsizers have time to pursue their interests and travel, and ensuring that their home is safe and does not require maintenance while they are away is a priority.

“The last ingredient is the location. Downsizers want to be close to the services, stores, and lifestyle factors they enjoy. Taringa ensures proximity to the city and a wealth of dining, shopping and more options in the heart of Brisbane’s Inner West.

“The Velocity Property Group is reviewing a number of locations in Brisbane in 2020 to create more desirable residential homes for downsizers, just like those in Parque on Oxford, Taringa.” 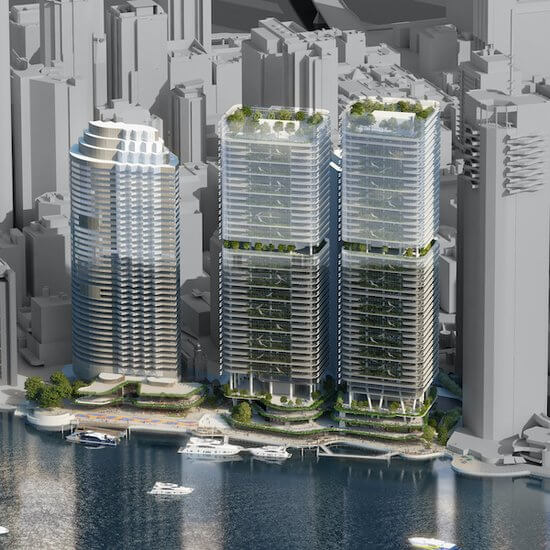 Two sparkly new office towers, a variety of restaurants and shops, a green open space, and enhanced riverbank facilities are on the cards for a $2.1 billion Brisbane waterfront master plan.

Announced this morning by the Queensland Government the development will be helmed by property group Dexus who will transform the city’s Eagle Street Pier into a premium business and leisure destination.

The property developer estimates 1120 annual construction jobs will be created over the next 10 years, with an additional 916 operational jobs supported once construction has completed.

In addition to the office towers and the riverfront restaurant and shopping precinct is a new and revitalised public space.

The space will feature around 7900 square meters of open space, incorporating a market square and steps, urban veranda terraces, the extension of the City Reach Riverwalk, and a new ‘green’ corridor connecting Eagle Street to the riverbank. 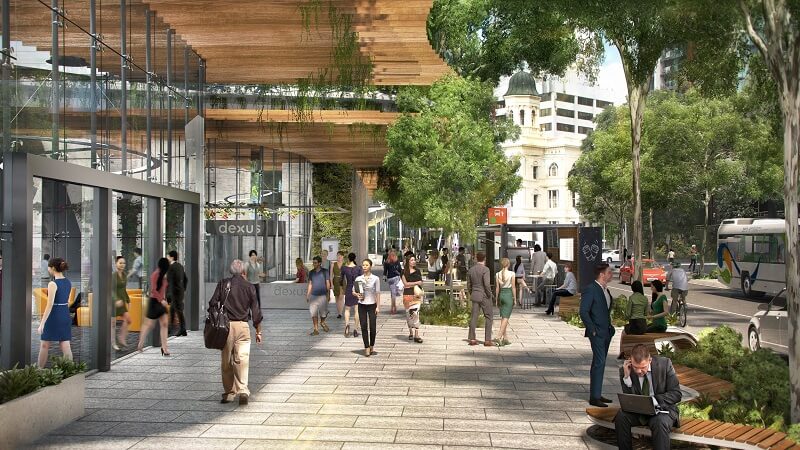 Minister for State Development Cameron Dick says the project will not only beautify the Eagle Street precinct but be a major boost to the city’s economy.

“This is a landmark project that’s estimated to provide a $5.7 billion boost to Queensland’s Gross State Product over the next 40 years, including $230 million in value and add to our state’s construction and professional services sectors,” says Dick.

“The Waterfront Brisbane proposal is a city-shaping development for Brisbane’s CBD and one that the Palaszczuk Government is proud to facilitate with Dexus for the benefit of the Brisbane and Queensland community.” 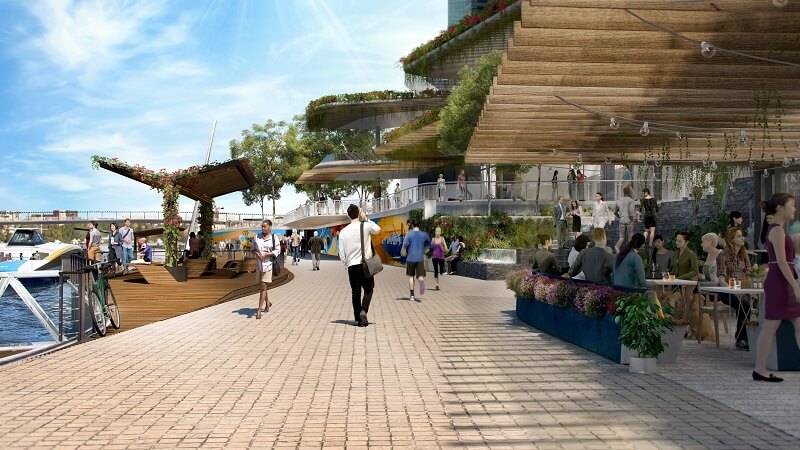 “This is a significant milestone that unlocks the considerable potential in this Brisbane CBD gateway site which has set under-developed for almost 30 years,” says Du Vernet.

Construction on the site is expected to commence in 2022, with the first tower to be completed in 2026. 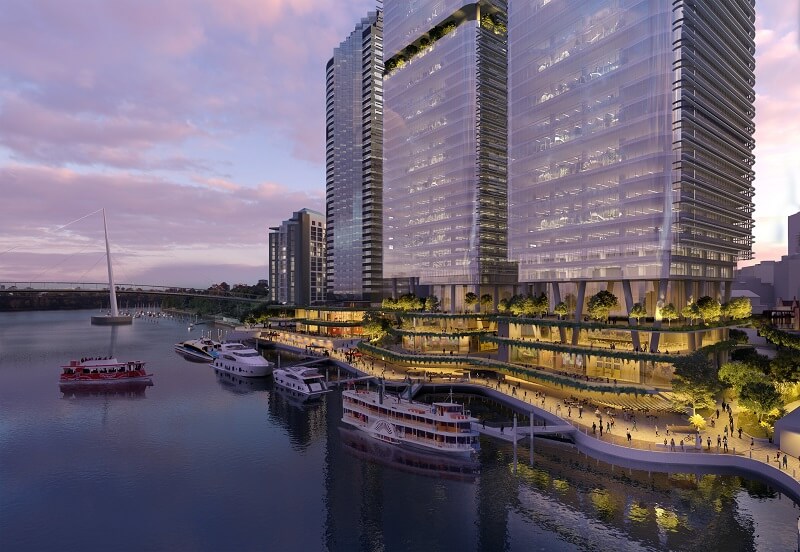