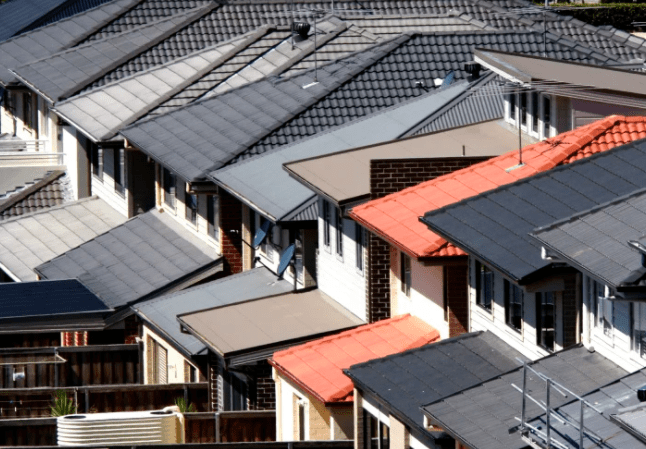 Banks will be required to set aside more capital for higher risk interest-only and investor mortgages, under long-planned changes to regulation that are aimed at making the sector more resilient to future shocks.

The Australian Prudential Regulation Authority (APRA) on Monday finalised its new framework for bank capital, which acts as a critical buffer to protect the financial system in economic crises.

The new regime, which APRA has been consulting on for four years, will start in 2023, and it will cement reforms that originated in the 2014 financial system inquiry led by former Commonwealth Bank chief David Murray.

APRA said its new framework would not force banks to raise more capital, but confirmed that it would impose higher capital requirements on mortgage lending deemed to be higher risk.

The changes are unlikely to come as a shock to banks, as they had been repeatedly flagged to the market. In response, banks have in recent years charged higher interest rates to property investors, interest-only borrowers and customers with smaller deposits. At the same time, banks are offering the lowest rates to owner-occupiers with larger deposits who are paying principal and interest.

Bank capital refers to funds held by the bank that can act as a shock absorber against risks, such as borrowers defaulting.

APRA said Australian banks’ top-tier capital had roughly doubled since the global financial crisis to more than $260 billion, and its new framework was aimed at reinforcing this strength.

In mortgages, the largest asset class for Australian banks, the regulator said its new framework would aim to better distinguish between higher and lower-risk lending.

To do this, it is changing the banks’ “risk weights” – financial models used to determine the riskiness of a loan, which influences how much capital is set against different types of lending.

Banks have already incorporated these changes into their pricing in recent years, but APRA’s new framework is likely to embed these practices permanently.

APRA chairman Wayne Byres said the changes were aimed at ensuring the nation’s banking system remained strong compared with banks overseas. “Capital is the cornerstone of the banking system’s safety and stability. It protects depositors during periods of stress, ensures banks can access funding, facilitates payments and helps banks to keep lending to their customers during good times and bad,” Mr Byres said.

“Although Australia’s banking sector is already strongly capitalised by international standards, the new capital framework will help ensure it stays that way,” he said.

APRA said its new framework tried to better support competition, but it had not closed the capital gap entirely between the “advanced” banks and others because it supported giving lenders an incentive to invest in advanced modelling.

Investment returns tipped to be lower in 2022 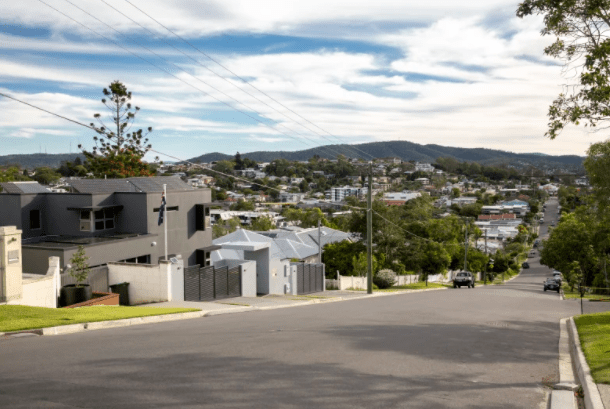 It is the start of a new year and financial market experts are making their annual fearless forecasts for the performance of share and property markets.

If the pundits are right, returns from major asset classes will not be anywhere near what they were last year.

Australian share prices, as measured by the benchmark S&P/ASX 200 Index, ended 2021 about 13 per cent higher. After adding dividends, the total return was a stellar 17 per cent.

He is forecasting the S&P/ASX 200 to finish the year at about 7800 points – about 5 per cent higher than its current level.

CommSec says Australian shares could outperform their global counterparts in 2022, supported by strong relative economic growth and higher dividend yields. However, it is a bit more conservative than AMP in its forecasts, tipping the S&P/ASX 200 to end the year with a gain of 200-400 points from current levels.

Property had a stellar 2021 and experts are predicting further price growth this year, albeit at a much slower pace.

However, the most recent CoreLogic figures show the tide is turning.

AMP economists expect property prices to rise just 5 per cent nationally this year, with prices likely to fall by 5 to 10 per cent during 2023.

Commonwealth Bank economists expect dwelling price growth of 7 per cent nationally in 2022, before a 10 per cent fall in 2023.

However, the national forecasts likely mask a wide price divergence between the big cities and regional areas.

Simon Pressley, the founder of Propertyology, says detached house prices in Adelaide, Brisbane, Hobart and Canberra could “easily” grow by more than 30 per cent over the next two years. He says that some regional locations could do even better.

Pressley says the price growth in the regions is being driven by net migration from the cities and the work-from-home phenomenon, which he reckons is likely to become a permanent change.

Economists at Russell Investments are forecasting official interest rates to remain unchanged this year. That is mostly because the economy has not yet seen the same levels of wage pressure as other countries.

If they are right, that will mean bank deposits continue to pay next-to-nothing. That would help support the sharemarket, which is expected to pay a grossed-up dividend yield of about 5 per cent.

Of course, there are plenty of issues that could derail any of the above forecasts.

The worry list includes the ongoing COVID-19 pandemic and the risks of other new variants, a rise in inflation and interest rates, any fragility in Chinese economic growth, and tensions between Russia and Ukraine.

Then there is the no small matter of a federal election, which must be held no later than May. 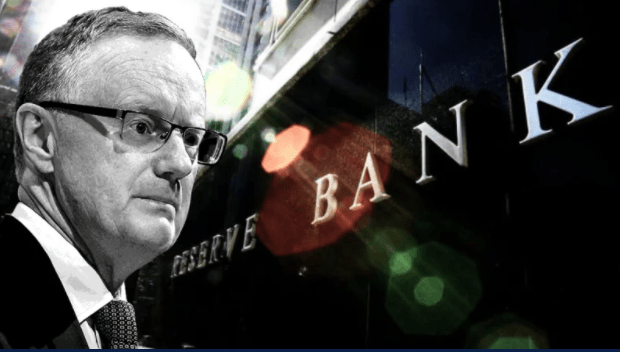 Chatter about rising interest rates is set to slow property price growth in 2022, although the cash rate is expected to stay on hold until late in the year or 2023, economists say.

After years of ultra-low interest rates, slashed to near-zero to support the economy through the pandemic, the next move is likely to be up.

The timing will be closely watched, and could come earlier than the Reserve Bank’s previous cautious suggestion of 2024.

Retail banks have already been increasing fixed mortgage rates from their trough below 2 per cent to cover their costs, but an official hike – likely the first in a series – will reduce borrowers’ budgets at auction. 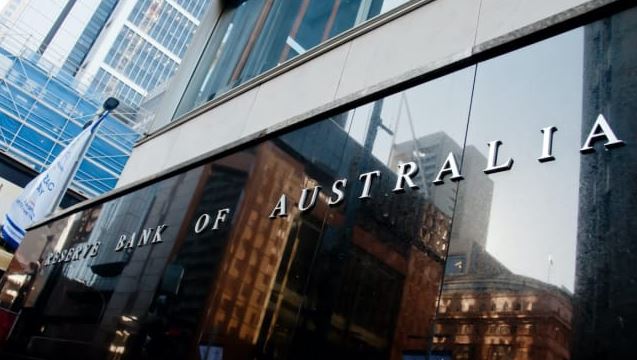 The Reserve Bank will be patient before lifting the cash rate. Photo: Louie Douvis

“The days of sub-2 per cent mortgage rates are over for the time being,” she said.

“It will mean that we do continue to see this slowing of house prices, and that’s why eventually we think that by 2023 prices will start to turn down.”

The Reserve Bank wants to see a sustained improvement in wages growth and inflation before it lifts the cash rate, as moving too early could derail the economic recovery.

Ms Emmett expects this won’t be until the first half of 2023, but not everyone agrees.

“There are a lot of people out there that think the RBA will have to move earlier,” she said. “There is a risk the RBA starts to price in rate rises much more quickly than we and the RBA are expecting.”

Westpac senior economist Matthew Hassan said although the central bank will be patient before lifting the cash rate, the case for change could be there by late 2022, ready for a rise in February 2023.

Some traders are expecting an earlier move, but he said wages growth can take time as awards and enterprise agreement negotiations can move slowly.

“Housing is super sensitive to interest rate moves and it’s really run well ahead of the wider economy,” he said. 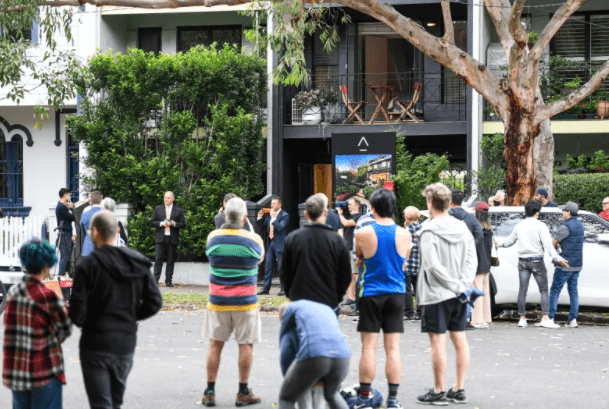 “The housing market has pretty much ignored Delta and had a strong surge before the economy has regained its pre-COVID levels … it will be much more sensitive to the tightening prospects in 2023.”

He expects housing price growth to flatten by the second half of 2022 as expectations of a rate hike build, and for the property market to fall the following year as interest rates climb.

Commonwealth Bank head of Australian economics Gareth Aird expects the cash rate to start rising at the end of 2022 and increase gradually to 1.25 per cent by the September quarter of 2023.

“There are a lot of households carrying a lot of debt,” he said. “The RBA should get a fair bit of mileage out of the hikes.”

Historically, property prices have lagged cash rate moves, he said, but this time property market momentum will pull back significantly by the time the central bank makes its much-anticipated move.

He expects property prices to peak in the second half of 2022, with growth already restrained by regulatory moves to cut the maximum amount buyers can borrow, and the higher costs of paying back a fixed-rate loan.

RateCity.com.au research director Sally Tindall said regardless of when the cash rate goes up, fixed mortgage rates are likely to keep moving up albeit at a slower pace, and some banks could even lift variable interest rates out of cycle.

Over the month to mid-December last year, 52 lenders hiked their two-year fixed rate products and 64 hiked for three-year loans, she said, compared to 11 and one who cut respectively.

And the moves are set to hit hip pockets – an average borrower with a $500,000 variable rate loan would face $103 extra on their mortgage each month if their rate rose 40 basis points.

“Hikes in the cash rate will make it more difficult for people [to buy], it will limit how much they can borrow from the bank,” she said. “However, it could also help cool property prices.

“Banks are conscious of not lending out eye-watering amounts of debt that people potentially can’t afford to repay, particularly with interest rate rises looming.” 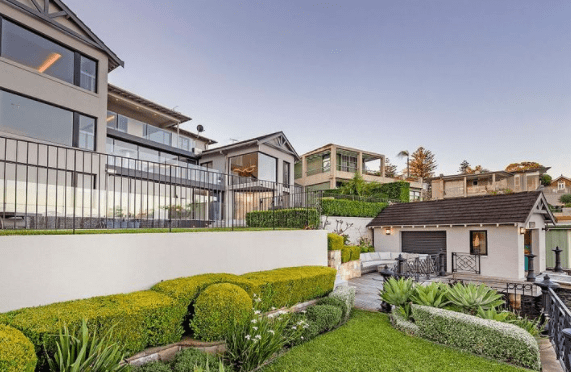 As well, owner-occupier loans are still well ahead of pre-pandemic levels.

Investor financing was the standout in the latest Australian Bureau of Statistics results, up 89.6 per cent on last year, slightly higher with a 1.1 per cent increase on October.

The lure of Queensland for investors continues, with commitments rising 8.9 per cent to a record high of $2.1 billion while interest in NSW and Victoria also remained elevated.

Although total housing commitments fell 2.5 per cent for the month, it was 32.2 per cent higher than last year as owner-occupied financing continued to drop from its peak in May at 4.1 per cent.

Meanwhile, the more volatile financing data for business construction rose 3.6 per cent for the month and 21.9 per cent over the year. 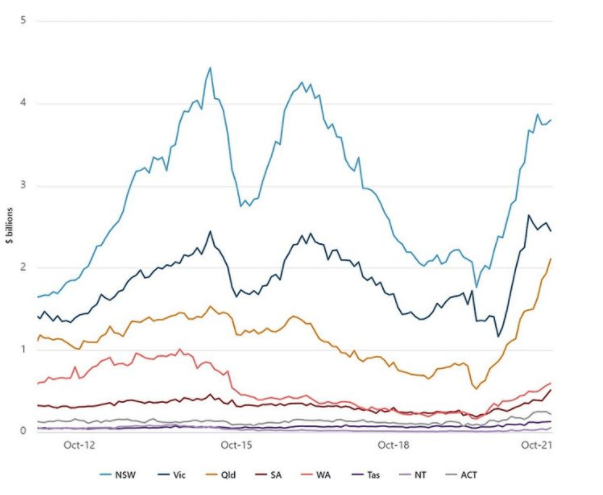 ABS head of finance and wealth Katherine Keenan said investor lending was at the highest level since its record peak in April 2015.

“The value of new loan commitments for investor housing has grown for 12 consecutive months, reaching $9.7 billion in October 2021,” Keenan said.

Real Estate Institute of Australia president Adrian Kelly said it was positive news to see the return of mum-and-dad investors who were particularly active in Queensland, South Australia and NSW.

“The housing market has seen significant growth over the past year … a sign this sector provided strong returns and future growth in many states and territories,” Kelly said.

The REIA president said this was creating further concerns around housing affordability with this group accounting for around 20 per cent of all new loan commitments in October.

“Of interest is that the drop in the number of owner-occupier first home buyer loan commitments was seen across most states and territories,” Kelly said.

“The ABS reporting Western Australia saw a massive fall of 13.8 per cent while Queensland fell by 6.3 per cent and New South Wales by 4.3 per cent.

“Small increases were recorded in Victoria, which rose by 1.9 per cent, while the Northern Territory increased by 6.0 per cent showing these sectors remain in high demand.”