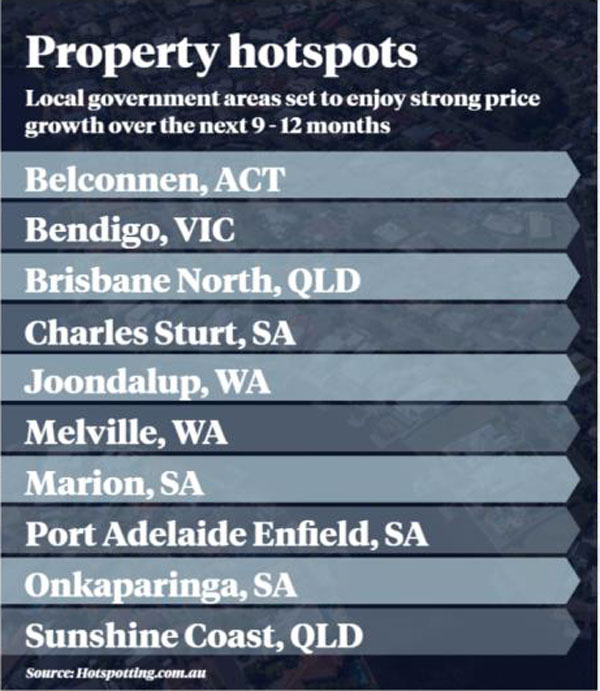 Reaction to the first property price increase since October 2017 has been mixed, to say the least.

To some, it was the first step on the long road to recovery.

To others, it is the by-product of modest demand meeting extremely limited supply.

To others still, reason for regulators to edge their feet closer to the brake pedal.

Whatever your interpretation of the median price movements, though, Terry Ryder considers it irrelevant.

The founder of hotspotting.com.au says sales volumes are a better predictor of future growth than median price data. And he’s encouraging investors to look beyond Sydney and Melbourne.

He has tipped suburbs such as Dunlop on the outskirts of Canberra, Epsom in Bendigo, Little Mountain and Landsborough on the Sunshine Coast, Flinders Park and Seaton in South Australia, and Ballina and Kooringal in regional New South Wales to do particularly well over the next nine to 12 months.

“Property markets arise out of what’s happening locally – it’s not so much about national factors. It’s not really about lower interest rates, it’s about the dynamics of local economies,” Mr Ryder said.

“There’s a lot of growth markets in regional Victoria, because Victoria as a state has a very strong economy and strong population growth.

“And, in Queensland, the Sunshine Coast has been strong because the local economy is really bumping. There’s been big spending on infrastructure and new industries have been created, like the new medical precinct.”

Mr Ryder included the 10 local government areas in the winter 2019 edition of his Price Predictor Index – a report aimed at investors that breaks down the price prospects of suburbs in all states except the Northern Territory.

Mr Ryder said the seasonal index, which highlighted Adelaide as the state capital with the strongest growth prospects, shows the idea of a national property downturn is misleading.

“The way economists talk about the property market as one market is a huge piece of misinformation,” he said.

“They’re now talking about the Australian property market recovery, but many markets aren’t recovering because they never dropped.”

And “renewed confidence and employment opportunities” meant there were plenty of longer-term opportunities in Perth, too. 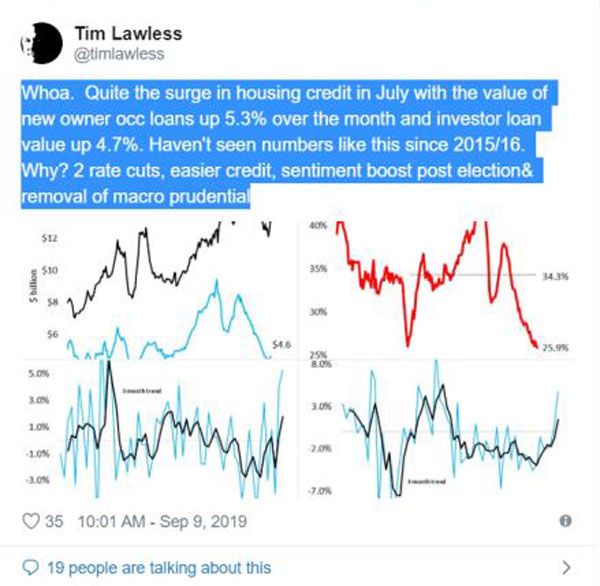 “Some of the areas we really like in Canberra are suburbs in and around Gungahlin … one because you’ve got a lot of good services and amenities, but also because you’ve got the new trams that pass through,” Ms Porter told The New Daily.

“In Adelaide, there are areas that are a little undiscovered 25 minutes south of Adelaide CBD … Morphett Vale and Woodcroft, even up as far as Edwardstown – they are affordable, they have good rental demand, they have good infrastructure and facilities, and they have lots of jobs.”

Ms Porter said the key to picking the next growth suburb was to look at vacancy rates, the suburb’s median price movement over the past 12 months, and the median number of days it took for properties in that suburb to sell.

“We analyse a whole lot of other statistics,” Ms Porter said.

“But I’d say to anyone looking to get their head around a market, that’s where you’d start.” 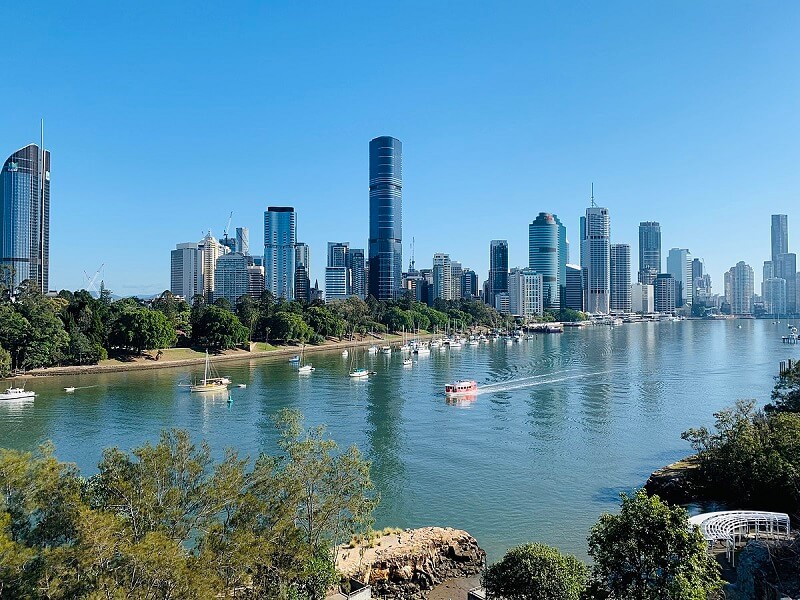 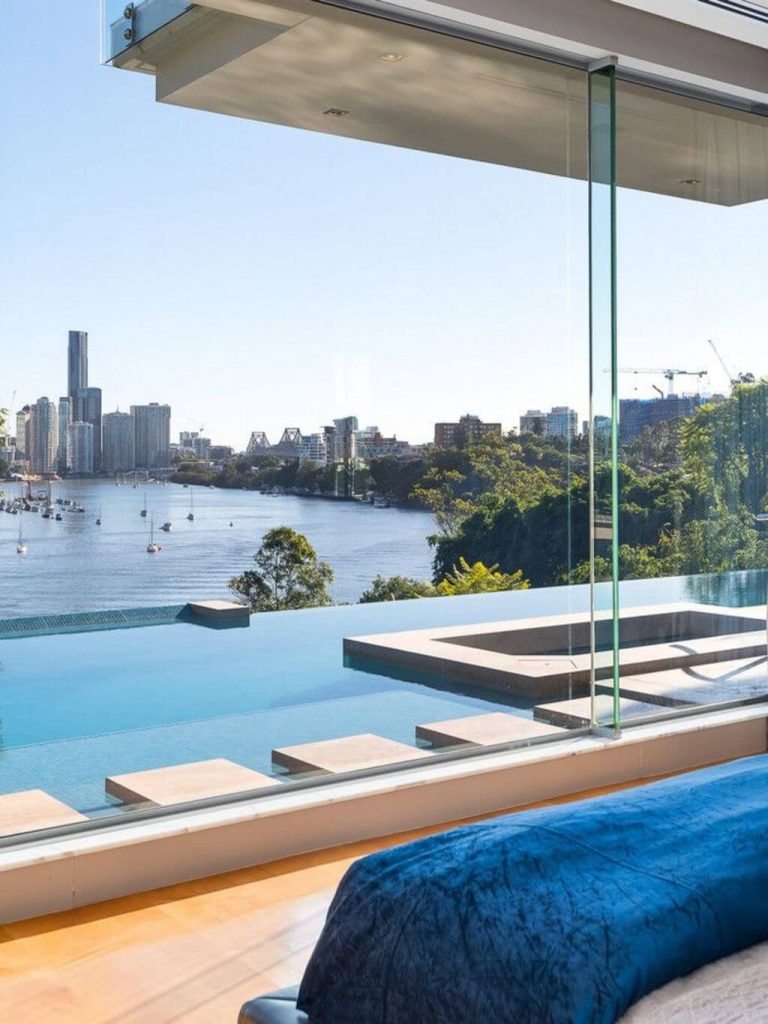 Brisbane is predicted to see some of the biggest house price rises in Australia over the next two years, according to new forecasting, rising by a whopping 8 per cent over the next 12 months alone.

In 2021, Brisbane could lead the price rise charge nationally, with predictions of an additional 7 to 9 per cent house price hike.

Domain economist Trent Wiltshire’s 2020 and 2021 predictions placed the Queensland capital in equal second with Melbourne for median house price growth and just two percentage points behind Sydney over the coming year. In 2021, it’s even better news for Brisbane, with house prices predicted to rise by a further 7 to 9 per cent. 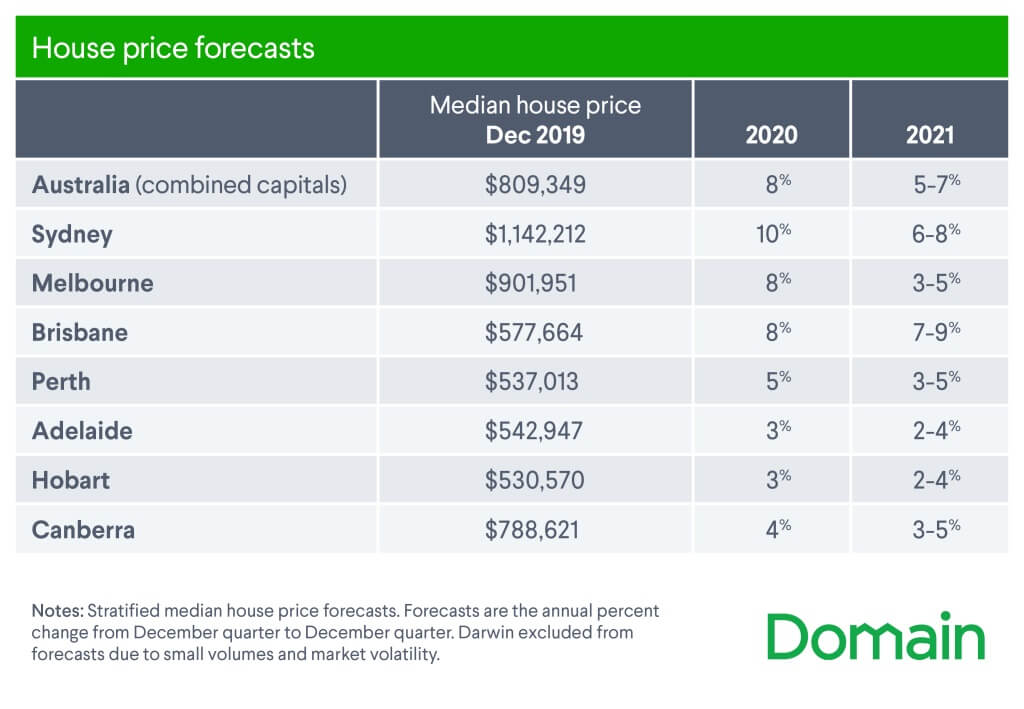 Mr Wiltshire placed the incredible market turnaround largely down to lower interest rates that he said could not only drop further, but stay there.

“It’s also probably feeding off what’s happening in Sydney as that generally spills over into Brisbane and south-east Queensland,” Mr Wiltshire said.

“Brisbane has been pretty sluggish over the past few years and this is going to be the most significant price growth [the city has seen in some time].

“The forecasts are also showing a population growth of 2 per cent in Brisbane … and this has picked up from interstate and overseas.”

In positive news for the apartment sector, Mr Wiltshire predicted a 6 per cent rise in Brisbane’s unit market over the next 12 months and said the end of the construction cycle boom for units was rapidly coming to an end. 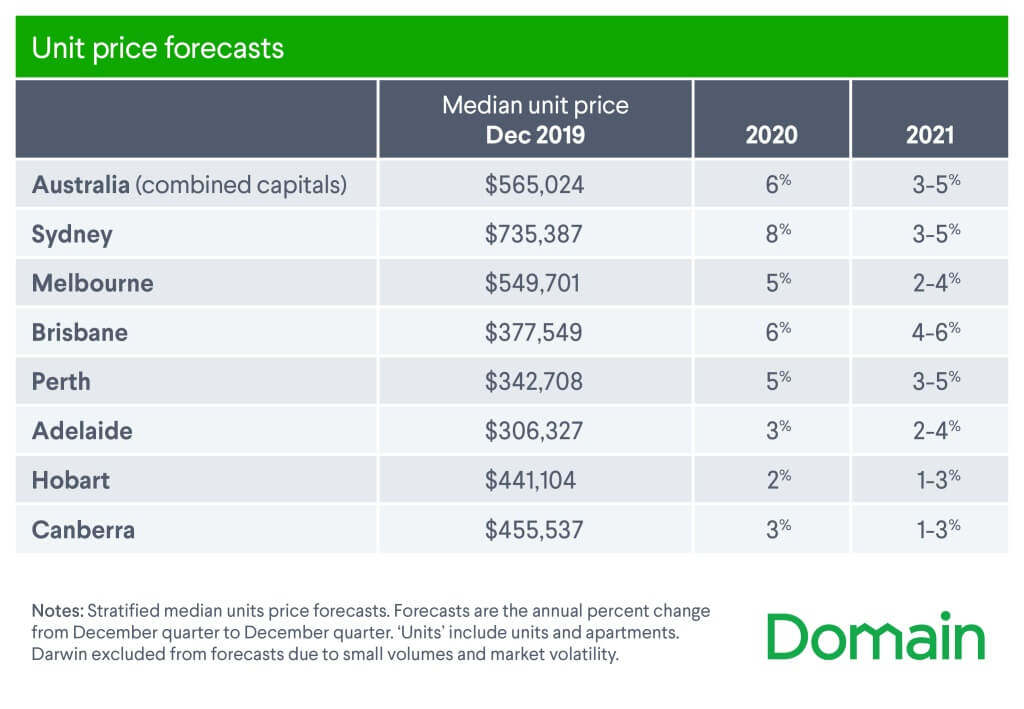 “This will support a much-needed price growth [in the unit sector],” he said.

While Mr Wiltshire’s report could spell tales of champagne wishes and caviar dreams, he said external factors such as the coronavirus would impact on the market.

“I’ve based my forecast on the most likely scenarios [of these external impacts] so the first one is the coronavirus and it’s going to have a strong but short-term impact.

“If those forecasts are wrong and it does worsen, it will hit Brisbane and Perth hard.”

Following one of the busiest months for buyer inquiry in a decade, Christine Rudolph from Ray White New Farm said she wasn’t at all surprised by Brisbane’s long-term price predictions, with a plethora of key factors placing the city in property watcher’s sights.

“Brisbane is seen as stable … and we have certainly been having a quiet confidence in the city for the past two years,” Ms Rudolph said.

“Seventeen per cent of our buyer inquiries are from interstate purchasers [from Melbourne and Sydney] who are relocating for lifestyle and 8 per cent are from Australian expats who are looking to relocate. This is driven by a few factors such as Brisbane being seen as stable and we have great long-term projections.

“Banks have also softened lending criteria and all those factors are definitely key drivers.” 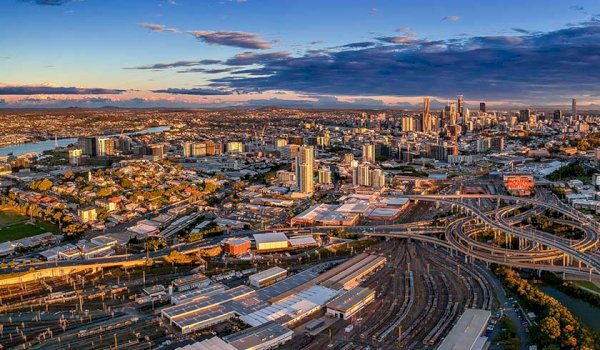 The stability that it has demonstrated over the years has proven Brisbane’s potential as a property market. How can investors maximise opportunities in the Queensland capital this 2020?

Both housing and unit markets in inner-east Brisbane present strong investment opportunities this near year, according to new insights from OpenAgent.com.au.

Murarrie, Cannon Hill and Morningside saw the highest rental yields for units at 5.90 per cent, 5.68 per cent and 5.28 per cent, respectively.

For houses, the highest rental yields were found in Murarrie, Morningside and Cannon Hill, with 4.38 per cent, 4.05 per cent and 4.01 per cent, respectively.

Seeing as rental yields for units are significantly higher than for houses, investors are advised against making decisions based on this single growth driver, OpenAgent.com.au data analyst Carson Teh said.

According to him, calculating rental yield based only on rent and median property prices usually produce higher values for units than houses.

However, other factors must be considered to determine actual investability.

“It’s important to calculate yield for specific properties that you’re looking at and to include expenses like strata, property management and utilities to get a more accurate representation on the return you’ll be getting.”

“Comparing the most recent census to the one before, the population has grown in all mentioned inner-east Brisbane suburbs.”

“These existing population trends should underpin demand into the future,” Mr Teh highlighted.

Over the past 12 months, the houses of Cannon Hill, units of Balmoral and units of Bulimba saw the largest increases in weekly rent prices at +8.16 per cent, +5.14 per cent and +4.17 per cent, respectively.