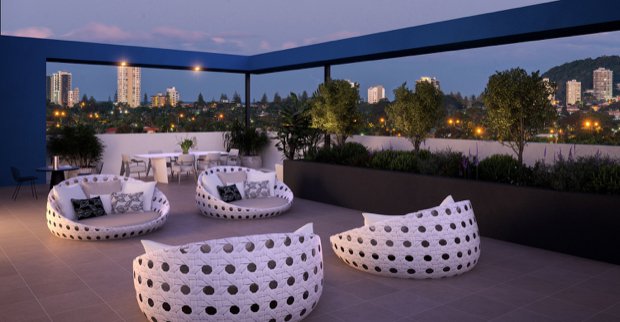 As a result of the continued strength of the Ipswich land market, the group has released a new stage in its Horizons precinct of the Providence South Ripley master-planned community.

Providence project director Michael Khan said their confidence in the area was backed by research by Oliver Hume, which revealed the Ipswich local government area had the strongest growth of any market in southeast Queensland for new land.

In the three months to the end of September, Ipswich’s average price for the new land was up 3 per cent compared with the June quarter to an average of $198,950.

The number of new land sales increased during the quarter by 25 per cent with a total of 637 sales.

Mr Khan said the relative affordability of the Ipswich and Ripley Valley area, particularly when compared to interstate markets, continued to drive demand for new land in the area.

“Value for money remains one of the most important factors for buyers and maximising every dollar when it comes to the location and access to amenities is extremely important,” he said.

The latest release in Horizon is close to the planned town centre area and district park.

The entire Horizon precinct has 280 lots, two parks, the planned Providence Town Centre and a future Prep to Year 12 school.

The $60 million Horizon precinct sits within the $1.2 billion Providence project which is a masterplanned community in the Ripley Valley growth corridor.

Oliver Hume Queensland general manager Matt Barr said the Ripley Valley was popular because it was close to major job nodes in Ipswich, Amberley and Springfield.

He said during the next decade hundreds of people would move into the area every month and he tipped that to continue for some time. 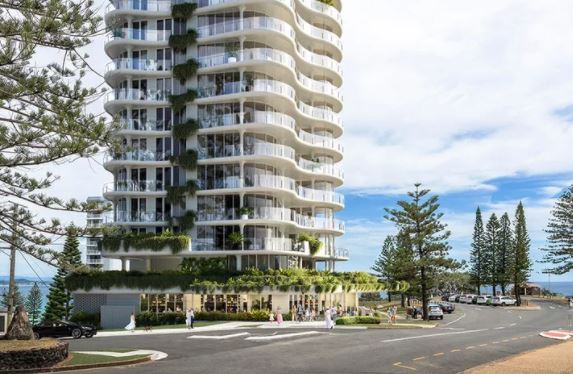 S&S Projects is riding the recent wave of popularity in coastal real estate markets with its next development, a 12-level apartment project in Coolangatta, approved and ready to commence construction.

Momentum on the Gold Coast has accelerated post-Christmas with developers, including S&S Projects, reporting that many recently launched luxury projects are almost sold out despite premium pricing.

The Brisbane-based developer put plans for the site forward in December after purchasing the current property for $8 million earlier in the year.

The development, known as Flow Residences, sold out late last year, with all 22 premium apartments sold off-the-plan within four months.

Both projects are near the famous surf breaks of Duranbah, Snapper Rocks, Rainbow Bay, Greenmount, Coolangatta and Kirra. 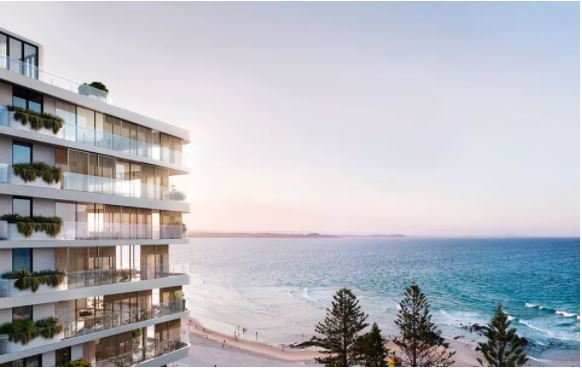 ▲ Flow is currently under construction with a 2022 scheduled completion date.

Gedoun said the success of its Flow Residences development had allowed him to acquire the Coolangatta site with confidence and fast-track development plans.

“Our last development was well oversubscribed with buyers and no doubt a lot of those people who missed out will be looking to secure a place in [our forthcoming project,” Gedoun said.

“We were keen to launch Awaken Residences to the market as soon as possible to tap into the existing momentum from local and interstate owner-occupiers seeking a laid-back and luxurious coastal lifestyle.

“We’re looking to bring some of the same elements that attracted so many buyers to Flow Residences into this new project.”

The approved Cottee Parker-designed development will feature eight full-floor apartments and one double-floor penthouse apartment with prices expected to start from $2.95 million.

The site is currently home to the popular D-Bar cafe—Gedoun said discussions were under way with its operators to continue their tenancy at the location once the project was complete.

At a neighbouring site, Brisbane-based Spyre Group has plans in front of council for a similarly positioned 12-storey Bureau Proberts-designed scheme—to be known as Cala Dei Residences.

According to the latest Apartment Essentials report from planning consultancy Urbis, 375 apartments were sold on the Gold Coast between October and December—the best result since 2016.

Owner-occupiers accounted for 54 per cent of sales in the final quarter of last year, more than double the previous year’s figure of 25.1 per cent. 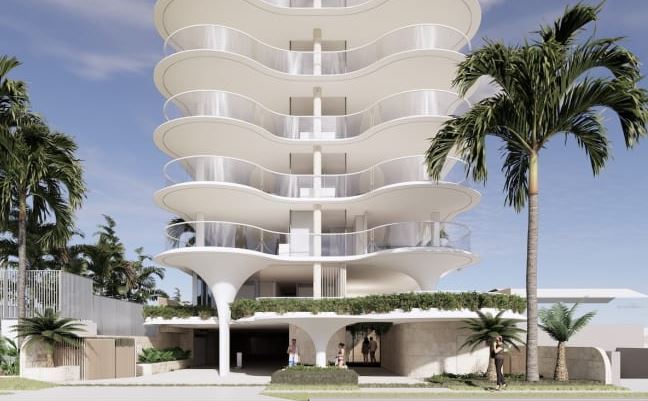 The team behind sell-out Gold Coast development Norfolk has joined forces again, this time for a 17-storey apartment tower, also at Burleigh Heads.

The yet-to-be-named tower, at 96 The Esplanade, planned for the 1012sqm site is being put forward by local developer Forme.

The development application as lodged with the Gold Coast City Council on Thursday.

Managing director David Calvisi said the success of Norfolk, currently being built on Goodwin Terrace at Burleigh, had prompted his group to reunite with Koichi Takada Architects and interior designer Mim Design.

All 15 apartments in that development, which were priced from $4 million, sold out before construction began.

The latest proposal is the fifth beach front development on the Gold Coast for the developer.

The 52.95m-high tower will offer 23 half-floor apartments of about 220sq m, three full-floor residences of 440sq m and a two-level penthouse of 790sq m including a gym, library, theatre and private rooftop pool. 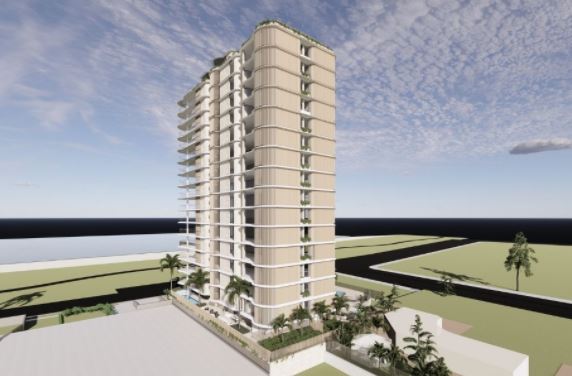 “Norfolk has been a great success and it was important we carried the key elements of its success, mainly via the architecture, through to the design at 96 The Esplanade,” Calvisi said.

“The distinctive design of the building and its sculptural features are intended to position the building as a landmark … and act as a catalyst to encourage higher-quality development in the area.”

The site, which was amalgamated by Forme over six months, is currently home to a low-rise unit block. It is directly across the road from beachfront parklands.

“Open plan living areas have typically been oriented east to face the ocean, with more private spaces at the rear of the building,” he said.

“The building is positioned on the site with consideration to amenity of neighbouring properties and generous setbacks to the existing neighbouring buildings.”

Architect Koichi Takada said the proposed tower’s organic curves were designed to “maximise views to the ocean and light, capturing the beauty of the Gold Coast and the essence of coastal living”. 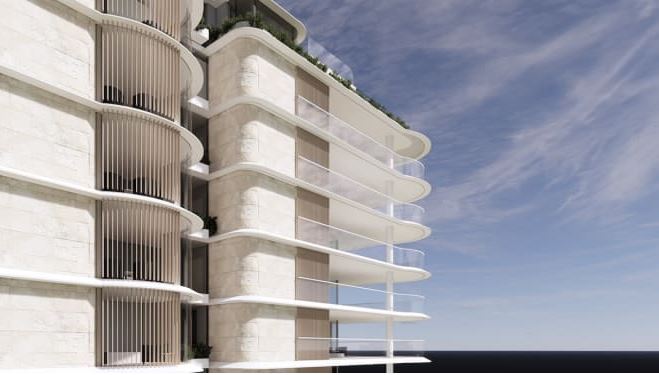 They’ve submitted plans to the City of Gold Coast council for a 17 level tower of just 30 apartments, designed by the renowned architect Koichi Takada.

It’s the second time Forme have engaged Takada to design, after huge success with their other nearby Burleigh Heads developments Norfolk.

“Since the scaffold dropped at Norfolk, the building has quickly become an icon” Forme managing director David Calvisi says, with the architecture flooding social media. Even the popular beach photographer Aquabumps have prints available of the iconic facade.

“Norfolk has been a great success and it was important we carried the key elements of its success, mainly via the architecture, through the design at 96 The Esplanade”, Calvisi added.

The new development will home 23 half-floor apartments of around 220 sqm, as well as three full-floor residences with around 440 sqm of space.

Crowning the tower will be a special two level penthouse. Across its 790 sqm floor plate will be a gym, library, theatre and private rooftop pool.

The layouts of all of the apartments have been designed to maximise the views and take in natural light. The open plan living areas typically have bene oriented east to face the ocean, with more private spaces located at the rear of the building.

The Melbourne-based MIM Design is handling the interiors. 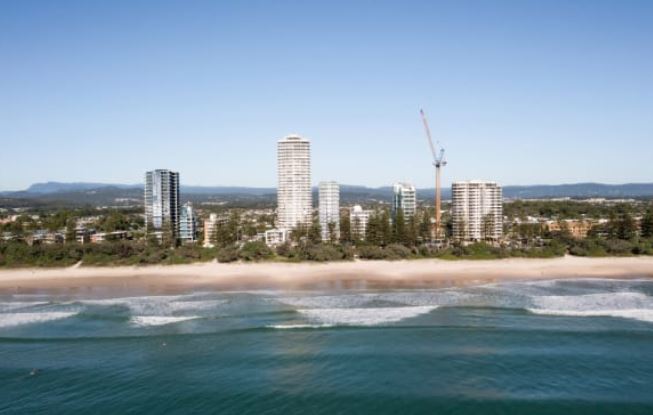 The Sydney-based Takada, who is rarely seen on boutique projects, said 96 Esplanade has been the work of the same team as Norfolk on an equally amazing waterfront site.

“Nature inspired architecture and organic curves are designed to maximise views to the ocean and light, capturing the beauty of the Gold Coast and the essence of coastal living,” Takada said.

“A simple and elegant design that is all about celebrating and maximising your connection with nature.The magical experience on this site is the direct connection to the water and the sky – like air, the design features are thin and light, almost invisible.

“The balconies float above the beach, reflecting the soft ripples of the waves below. Expansive balconies celebrate an outdoor lifestyle and open style living. Composed of materials that reference nature, the design is inspired by ripples on water that dissipate over time.”